Stephan Winkelmann, Automobili Lamborghini’s president and CEO set out a bold vision for the ultimate one make series Lamborghini Blancpain Super Trofeo at the final round of the European series in Los Arcos, Navarra.

While summarizing the successes Super Trofeo had recorded over the past twelve months, the press conference in the Atalaya Centre at the Navarra race circuit provided the stage to unveil the series’ 2013 race car, the new Gallardo LP 570-4 Super Trofeo. 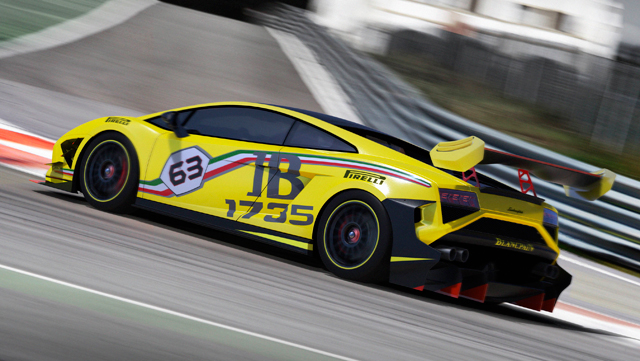 The 2013 Gallardo which is still based on the previous platform takes a significant step forward by having an extensively improved aerodynamic profile which includes a number of adjustable aerodynamic devices including a rear wing capable of having 10 configurations. All these improvements result to a staggering 120% improvement in its aerodynamic efficiency over the 2012 model.

Thermal performance was also improved by re-modeling its brake ducts achieving a 50% improvement in the front brake cooling, while better balance and dynamic performance are achieved by increasing downforce by 128kg in low downforce set up and 160kg in high downforce trim.

While the racing technology advances, Mr. Reggiani emphasizes that the Gallardo provides an efficient and cost-effective platform for customer racing. “We have taken a significant step forward with the aerodynamic performance of the new Gallardo LP 570-4 Super Trofeo, but still the car stays true to our core principles. We believe that it is important to evolve the car while ensuring Super Trofeo remains an attractive series in which to compete.”

Hyundai Australia surprises everyone with the unveiling of its Veloster Race Concept car at the Australian Motor Show happening this week at Sydney. Shown in tarmac rally spec, the Veloster was developed by a local shop to comply with FIA and CAMS Australian tarmac rally competition regulations

Felipe Massa stays with Ferrari until end of 2013

Scudiera Ferrari has officially announced that Felipe Massa will stay with the team until the end of the 2013 race season.