Teenaged racing phenom Luis Gono has emerged as the series champion of the 2014 Toyota Vios Cup Season, besting 24 other drivers in an extremely competitive and dramatic championship run.

The final leg saw several changes due to the special nature of the street circuit. The organizers implemented a double points system for the out-of-circuit venue as well as a qualifying shootout and a pair of elimination sprint races to determine the top 20 for the main races. 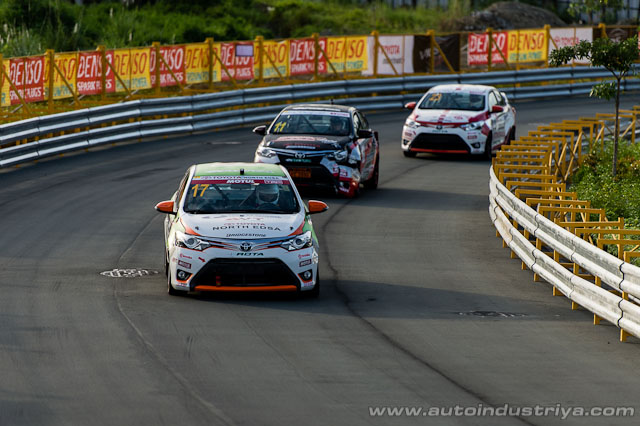 Driving for Toyota North Edsa-Autoplus, Gono entered the third and final leg of the Vios Cup at the Mckinley West Street Circuit with a 26 point deficit behind then-series leader Jason Choachuy of Toyota Balintawak.

The qualifying of the dramatic third leg saw the elimination of series leader Choachuy as well as championship contender Allan Uy of Toyota Quezon Avenue. The two were involved in an on-track tussle that resulted in both finishing out of the contention for the main, point-scoring races, leaving Gono (who qualified strongly for the races) with a wide open shot at taking the championship; the youngster only needed to finish in 2nd and 3rd place to assure himself of the title.

Race 5 went off without a hitch, but after the tumultuous events that happened in Race 6 such as numerous crashes, red flags, penalties and other incidents that resulted in only half points being awarded, Luis Gono was able to haul in a valuable 39 points to give himself the championship and a brand new 2014 Toyota Vios 1.5G 5MT as the prize.

Pauland Dumlao drove in top form in Race 5 and 6, thereby garnering the maximum 60 points for a total of 79, assuring him of the runner-up spot in the championship and a prize purse of PhP 400,000.

Toyota Batangas driver Carlos Loinaz sits with 43 points followed by Carlos Castaneda with 38. The other points finishers include Basti Escalante with 19, Andres Calma with 15, Bryan Co and Ferdi Raquelsantos each with 11 points, Charlie Cojuangco with 10, Ramon Tanjuatco with 8, Tonton Ramos with 6, Steve Bicknell with 2 points and Robert Lilles with 1 point.