Audi Korea to partake in the event next year

Hong Kong driver Marchy Lee has become the first ever Audi R8 LMS Cup Champion after crossing the line second in the twelfth and final round at the Shanghai International Circuit. The winner’s honors went to Audi Driving Dreams team guest driver Edoardo Mortara who took a confident lights-to-flag victory, giving him two race wins this weekend. Third across the line and sealing his second place overall in the championship was Adderly Fong driving for the KLM Team. Malaysia’s Alex Yoong was fourth in the Audi GQ car, confirming his third place in the overall points’ standings. 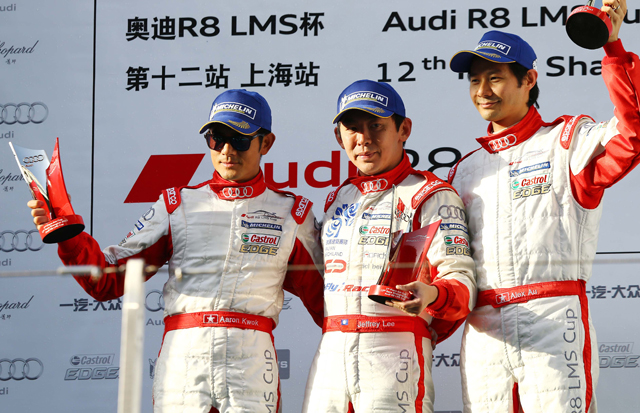 The Amateur Cup had already been taken by Jeffrey Lee in Saturday’s Round 11 but second and third places in the Amateur’s Cup were confirmed respectively for Alex Au of AK Racing and top celebrity and accomplished driver Aaron Kwok of Team Audi R8 LMS Cup. The Teams’ championship was also wrapped up today with Audi Ultra taking top honors on 229 points ahead of Audi GQ on 193 points and KLM Team on 186 points.

An exciting mix of professionals, rising stars, and passionate enthusiasts, the Audi R8 LMS Cup has seen 16 drivers compete against each other in identical cars. Racing across the region with rounds at Zhuhai, Shanghai and Ordos, the series is an optimum showcase for Audi's lightweight technology. Along with partner, Michelin, who introduced a first in Asian motorsport a long life tire which lasts over the course of an entire weekend, Audi sees the Cup as the perfect opportunity to nurture motorsport talent and demonstrate its commitment to China and its customers in the region. As a further sign of this commitment it was announced that Audi Korea will enter an official team in the Audi R8 LMS Cup for 2013.

Commented Rene Koneberg, Director of Audi Sport customer racing China: “Audi is proud to have completed such a successful first ever single-make championship. Next year, we will go from strength to strength supporting motorsport across Asia.”

After struggling for pace through Friday's rain-hit, mainly gravel course, Loeb moved in front on the asphalt of day two and remained ahead of the field during the entire race in his Citroen Total World Rally Team DS3 WRC.