Dempsey Racing planning to be the first SKYACTIV-D customer.

Mazda Motorsports today announced that it will start selling racing versions of its new SKYACTIV-D Clean Diesel engines to teams competing in the Le Mans Prototype 2 (LMP2) class of the 24 Hours of Le Mans. The Le Mans engine program will make its debut at the 2013 running of the race. Mazda was the first – and to this day, remains the only Asian manufacturer to score an overall win at the race, in 1991.

"This reopens our love affair with Le Mans," said Jay Amestoy, Vice President of Mazda Motorsports, Mazda North American Operations (MNAO). "In 1991 we made history, winning with rotary technology. Now we're looking to return to the winner's circle with what we believe will be the most advanced and cleanest production-based powerplant the sport has ever seen.  We'll do it in current Mazda style, with engines being available for sale to European and U.S. customers competing in the LMP2 class for both the World Endurance Championship (WEC) and the American Le Mans Series (ALMS)."

The engines will be stock-block Mazda SKYACTIV-D 2.2-liter diesel four-cylinder, dual-stage turbocharged powerplants.  According to John Doonan, MNAO's Director of Mazda Motorsports, the engines "will deliver outstanding performance and fuel economy coupled with the kind of quality, durability and reliability needed to produce great street cars and win endurance races."

Mr. Masahiro Moro, Executive Officer in charge of global sales and marketing of Mazda Motor Corporation, made the following comment:  "Mazda has fostered the culture of 'never stop challenging.'  And it was this spirit that drove us through 18 consecutive years of racing at Le Mans, until we finally triumphed in 1991.  In fact, it is this same spirit that laid the foundation for the portfolio of SKYACTIV Technologies.  This was realized thanks to a number of technological breakthroughs.  I am pleased that we will be supporting our private customers who are taking up the Le Mans challenge by supplying race engines as a customer-program based on our SKYACTIV-D CLEAN DIESEL." 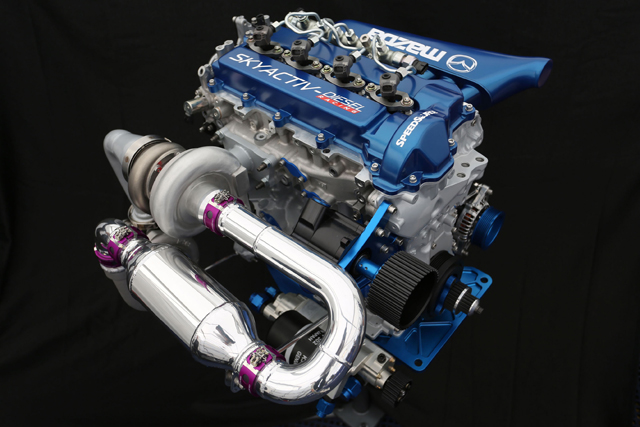 With support from several partners such as VISITFLORIDA.com, Dempsey Racing expanded their operation this year to include a team running in the American Le Mans Series, and is competing in both the Prototype Challenge (LMPC) and Prototype 2 (LMP2) classes as they prepare for their Le Mans effort. In fact both team owner Dempsey and co-driver Joe Foster are currently testing their LMP2 car in Virginia as the rest of the sports car world focuses on the 80th running of the 24 Hours of Le Mans this weekend.

Patrick Dempsey comments, "Our long-term partnership with Mazda has been fantastic, and we look forward to mutual success as we prepare for 2013.  We are focused on that preparation which is why we are currently testing our LMP2 car here in the US in preparation for the next ALMS event.  Our team and partners are excited to be associated with SKYACTIV-D technology and the cutting-edge green technology it represents."

During qualifying for the 24 Hours of Le Mans, the world's most prestigious sportscar endurance race, a duo of Audi R18 e-tron quattros took the front row of the grid.