Veteran Pro Stock driver and former world champion Mike Edwards claimed his fourth victory in a row at Bristol Dragway with his holeshot win in the closest NHRA national event final round ever, Mike Edwards left on Allen Johnson by a .005 to .018 margin and won the race with a 6.674 to Allen Johnson's 6.661. The margin of victory was .0000-second, making the Pro Stock contest a virtual dead heat in which only the computers could determine the winner.

“I don’t even know how you can describe something like [the final] in words,” Edwards said. “Four zeros for the margin of victory. I just can’t believe it. Sometimes, we struggle just a little bit, and then we come to this place [Bristol], and we do well. Sixteen straight round wins is unbelievable. I tell you, I wish we raced them all here. My guys did an awesome job this weekend. We weren’t the fastest car, just the second fastest car, but we got the job done.” 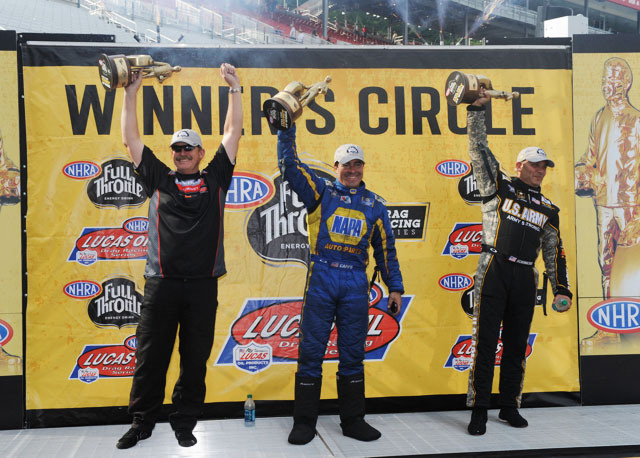 “Hats off to Allen Johnson,” Edwards said. “They did an awesome job too, especially in front of their home crowd. It had to be hard for him to lose a race like that. I can’t explain it, but we just run exceptionally good here. I wanted to win this race four in a row so bad that I came here right after Englishtown and tested for two days, and I’ve never done that at a track where we have our next race. I wanted it bad, real bad.”

Edwards raced to his second win of the season by beating Larry Morgan, four-time world champ Jeg Coughlin Jr., and the most successful female in Pro Stock, Erica Enders, before reaching his second final round of the season.

Schumacher’s U.S. Army dragster ran like a bracket car all during Sunday’s eliminations, with his slowest pass coming in the final round against long-time on-track rival, Doug Kalitta. Schumacher did his job on the starting line; his reaction time was four-hundredths better than Kalitta’s, leading to Schumacher’s slower but winning e.t., 3.819 seconds at 342.28 mph. 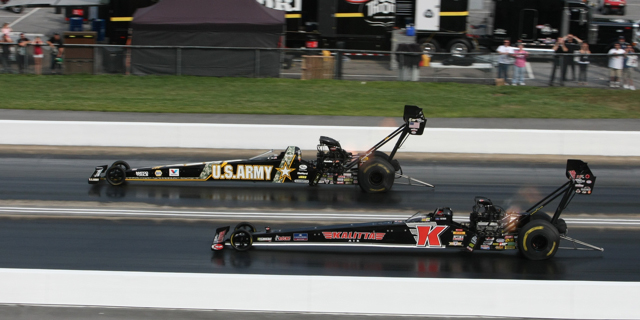 Schumacher earned his first win in almost two seasons the hard way, taking out Dom Lagana in round one, DSR teammate Spencer Massey in round two, and local-favorite Clay Millican in the semifinal round to earn his fifth final-round appearance of the season. Schumacher’s win is his 68th career win and fifth at Bristol Dragway, and it secures him the sixth spot in the Traxxas Shootout, the Top Fuel bonus race at the Mac Tools U.S. Nationals presented by Auto-Plus.

“I’ll tell you what it was a long time, a long, long time,” Schumacher said. “You get used to winning those races — you know, 15 races in a year — you know we’re just not used to that. We had a great car, and more often than not, we got beat by some incredibly talented teams in very close races, so it was tough for us to deal with, but at the same time, it is what we do. We had the point lead two times early in the season without winning a race. We keep our chin up, we don’t fire people, we motivate, and get through the adversity. We lead. That’s what we do; we lead them. We make them believe in themselves. I said it all along, ‘Have faith. We’re going to go out and win these things.’ I didn’t want to be the second guy to win a championship without winning a race. That’s not cool. It so much more fun to win and dominate. For a long time, we had a car that was a tenth of a second quicker than everybody, and it’s not out there anymore. It’s hard on any given day to have a car that outruns everyone four runs in a row. You’ve got to go out there and do your job. I’m just very thankful that Mike [Green, crew chief] and Neal [Strausbaugh, assistant crew chief] and all nine guys did a phenomenal job.”

The 24 Hours of Le Mans is a unique race, shoehorning what could only be described as an entire F1 season in a day.

Nissan Navara - Daring On and Off Road