First Thais to compete in Race of Champions

Nattavud Charoensukhpawatana and Tin Srtitrai earned their seats to represent Thailand in the Asian Cup and Nations Cup of the 2012 Race of Champions held at the Rajamangala National Stadium in Bangkok, Thailand. In a series of duels with fellow champion Thai drivers drift star 'Kiki' Sak Nana and Formula Asia Champion and touring car driver Nattapong Hortongkum. 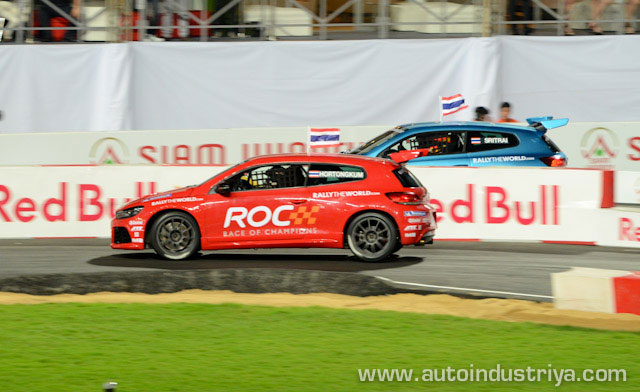 The Thai drivers tried to best each other out in the course specifically set-up by the Race of Champions team. They drove specially prepared Toyota 86 coupes, Volkswagen Sciroccos and the ROC car in timed duels on the special circuit course. In the end, it was Nattavud Charoensukhpawatana who emerged victorious as the fastest driver from Thailand.

"It was a great race today and I would like to thank all my fans because their support was powerful. My experience helped but what was most important was that I didn't make any mistakes. This is the first time we've had this event in Thailand and I hope it will come back next year too. If I have another opportunity next year I will definitely come here again," said Charoensukhpawatana.

Nattavud and Sritrai will compete with Ho Pin Tung and Han Han from China; Narain Karthikeyan and Karun Chandhok from India; and Japanese drivers Kazuya Ohshima and Takuto Iguchi in the ROC Asian Cup. They also earned the chance to race against International champion drivers like Michael Schumacher, Sebastian Vettel, and Sebastian Ogier in the ROC Nations Cup.

Indian drivers Narain Karthikeyan and Karun Chandhok bagged the win in the inaugural ROC Asia Cup at the 2012 Race of Champions in Bangkok, Thailand.

Porsche introduces its latest edition of its 911 GT3 Cup race car which will exclusively compete in the one-make Porsche Mobil 1 Supercup in 2013.

New vs Old: What did Toyota change for the 2020 Fortuner?

Toyota's changes to the 2020 Fortuner are more than skin-deep. Here's what they did.