Audi went against the grain and showcased the new Audi R18 e-tron Quattro not on the track at Le Mans but in public traffic.  Driven by Tom Kristensen, the record holder of nine Le Mans 24 Hours, the diesel hybrid racecar was taken on an almost 10km drive from the Saint-Julien du Mans cathedral in the city center to the famous race track. 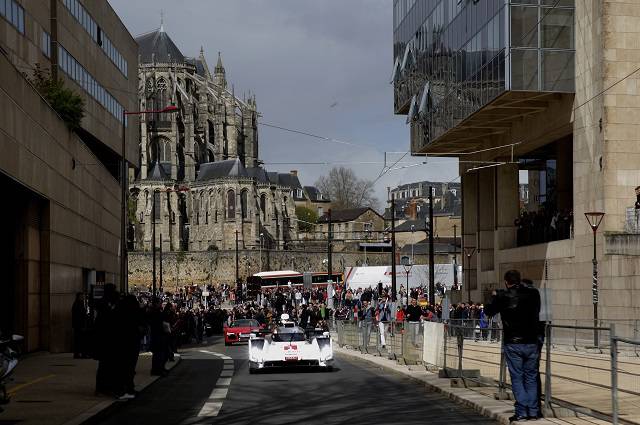 “I’ve been competing at Le Mans since 1997 but this was absolutely new for me, too, and very exciting,” said Tom Kristensen.

The new Audi R18 e-tron Quattro now sports a new color scheme of white, silver, red and black.  It is a fresher and more expressive compared to the previous livery but it also is symbolic.  Red is easy, its Audi’s performance color. “Silver emphasizes the past success in racing.  White is used asymmetrically in order to symbolize the complexity of this powertrain technology.  Black stands for light-weight design.” said Dirk van Braeckel, Design Manager Motorsport and Special Projects at Audi.

The new Audi R18 e-tron Quattro also gets a displacement bump from 3.7 liters to four ‘to further optimize the engine that had already been very efficient’.
The Audi R18 e-tron quattro will be participating in the FIA World Endurance Championship (WEC) official test at Le Castellet (France) on March 28 and 29 before it begins its title defense at Silverstone in the UK on April 20.

With more than 1,500 kilometers under its belt, the Spark-Renault SRT_01E has performed flawlessly and is on track for production.