Subaru Rally Team USA has just taken the wraps off of the 2015 WRX STI Rallycross car which is set to compete in the upcoming Red Bull Global Rallycross and X Games Rallycross scheduled to take place on May 31, 2015 and June 5, 2015 respectively.

Dubbed internally as the VT15x by both Subaru and its technical partner Vermont SportsCar, it is the third evolution of an STI-based Rallycross car in four years. From the outside, it has highlights of gray, white and orange, a wide bodykit and METHOD race wheels painted in orange.

Both Subaru and Vermont SportsCar did not go into specifics about the car but they did say that have optimized the following for Rallycross: weight balance, center-of-gravity, suspension geometry and aerodynamics. 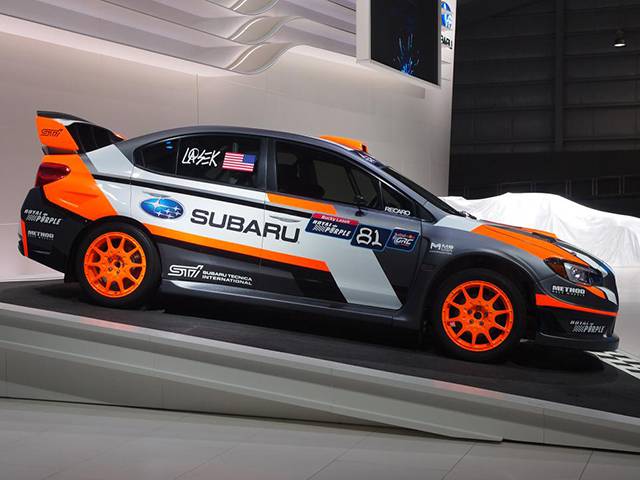 They did however reveal that the car is powered by a modified 2.0-liter Boxer engine that puts out 587 PS and is mated onto a 6-speed Sadev sequential gearbox that drives all four wheels. The 2015 Subaru WRX STI Rallycross can go from 0 – 100 km/h in just 2 seconds.

“Confidence is high within the Subaru camp that we have a winning package of driver talent driving faster cars for this season.Our goal in 2014 was getting to the front row of every final and being on the podium. This year, our only goal is winning,” said Rob Weir, Subaru Motorsports Marketing Manager.