Nissan’s ZEOD RC sets itself apart from the pack before the race has even started.  During test day at Circuit de la Sarthe the ZEOD RC hit the track minus an important safety accessory, its rear-view mirrors.

The ZEOD RC, which is about the set the record as the first car at Le Mans to complete an entire 8.5 mile lap of the Circuit da la Sarthe on nothing but electric power, has tapped the technological resources from Nissan Safety Shield and Nissan Smart Mirror to also become the first mirror-less vehicle at Le Mans. 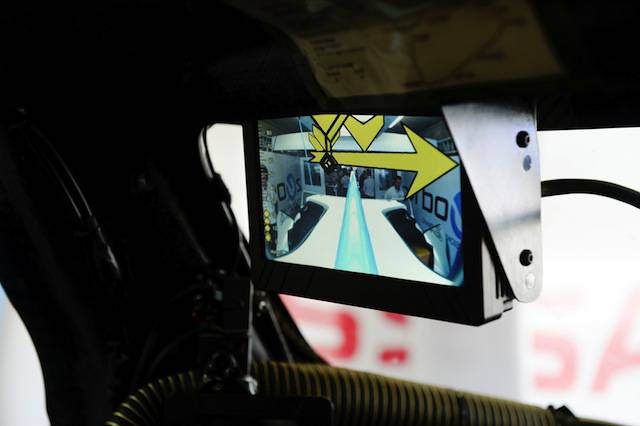 Drivers Wolfgang Reip and Tommy Erdos, completed test day laps using a rear-facing camera that appears to provide a more comprehensive view than the mirrors. The mirror-less system also has an inbuilt radar system that not only alerts the drivers about upcoming traffic and whether it is coming from the left or right side, but provides further insight on closing speed through large arrows on the screen.

This camera and radar system will again be used in France for practice and qualifying where Reip will be joined by fellow GT Academy winner, Lucas Ordóñez plus Japanese star, Satoshi Motoyama.

“These driver assist systems are just another aspect of future technology transfers that will improve the road cars of the future.  The development of the battery technology will obviously assist the development of future versions of the Nissan LEAF and other hybrid models, but lessons learned from the driver assist systems will find their way into every Nissan model in the future.  If we have a system which can provide safe and important information at 300km/h in a high pressure situation, then we can adapt that for use in road cars.  One of the reasons why we race is that motorsport helps our engineers to really fast track technologies and test them in extreme environments. There is no event or competition more extreme than the Le Mans 24 Hours,” said NISMO’s Global Head of Brand, Marketing & Sales, Darren Cox.

As we reported in April, it is the Smart rearview mirror and is housed within the structure of the rearview mirror, with a built-in LCD monitor that can be activated in place of the conventional mirror.

In case a technical problem causes the rear-view camera or the radar to malfunction, the Nissan ZEOD RC will pit and have the rear-view mirrors mounted.

It has not shown any weaknesses and has been reliable through weeks of testing.

As expected, without the rear-view mirrors overall drag has been reduced significantly on the Nissan ZEOD RC and with the entire concept based on efficiency of the aerodynamics, the powertrain, reduced fuel consumption, improved rolling resistance and improved battery regeneration, it seems like Nissan is on the right track.

Technologies developed for the Nissan ZEOD RC will also be used by Nissan’s new LM P1 entry for the Le Mans 24 Hours and the FIA World Endurance Championship.

Police point to targeted killing of Pastor, no suspects yet

Porsche claimed the front row for the provisional grid of the 82nd 24 Hours of Le Mans for a strong return to endurance racing.