Nissan today confirmed that it will be expanding its extensive global motorsports program from this year and beyond. The company's dedicated performance road car and motorsports arm, Nismo, will be leading the said expansion for the brand.

As a start, the company will return to the legendary Le Mans 24 Hours in 2013 with 17 Nissan Nismo-powered cars making the Nismo-tuned Nissan VK45DE V8 engine as the powerplant of choice for majority of the LMP2 teams.

To fill the Garage 56 slot in 2014, the company is focusing on incorporating electric technology on the DeltaWing. The entry will serve as a testing ground for Nissan's innovative new powertrain technology and provide the Automobile Club de l’Ouest (ACO) and the Federation Internationale de l’Automobile (FIA) with data to enable all parties to evaluate the incorporation of this breakthrough technology ahead of its potential return to LMP1.

“We will return to Le Mans with a vehicle that will act as a high-speed test bed in the harshest of environments for both our road car and race car electric vehicle technology,” said Mr. Carlos Ghosn, CEO of Nissan.

For the Super GT Series, a total of four GT500 GT-Rs will represent Nissan Nismo and the GT-R and has undergone extensive aerodynamic and engine enhancements including the distinctive 'shark teeth' design of the car's rear portion and some work on the car's under body. The 3.4-liter V8 VRH34B engine which is on its third straight season has undergone several modifications to maximize engine output, fuel efficiency, response time, and torque characteristics. 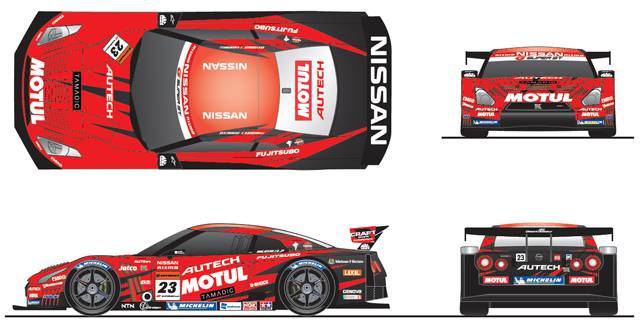 Meanwhile, a GT-R Nismo GT3 will be fielded for the GT300 class. Several improvements made to the car were emphasized on the engine output and durability by altering the gear ratios and brake distribution; aerodynamic qualities of the car were also optimized together with the suspension.

In Australia, Nissan Motorsport recently announced that they will be ushering in their long-awaited return to Australian Motorsport with four new Altima V8 Supercars as its factory team for 2013. The opening race of the 2013 V8 Supercars Championship is the Clipsal 500 at the Adelaide Parklands, March 1-3.

A total of one Nissan GT-R Nismo GT3 and six Fairlady Z race cars will be competing in the Super Taikyu series with the GT-R team participating as a school class under the partnership between Nissan Jidousha-Daigakkou (Nissan technical college) and Kondo racing.

As part of their driver development program in Japan, Nissan will continue to support two drivers, Mitsunori Takaboshi and Kiyoto Fujinami in the National Class(N) of All-Japan F3 championship and Formula challenge Japan respectively.

The hugely successful GT Academy program of Nissan which makes virtual racing a reality to a number of talented gamers. Graduates of the program has been given a chance to be recognized as 'Nismo Athletes' and plans to enter them in the FIA GT Series after being rejected in the British GT Championship for 'being too fast'.

“Nismo is a key element in Nissan’s future global road car and motorsports strategy and we will quickly establish it as Nissan’s exclusive performance brand. This is the first time that all of our team has been located together and the entire facility will become a hothouse of passion and performance, and our talented engineers can stretch boundaries to create some new heroes.” said Nismo President Shoichi Miyatani.

Marlon Stockinger shared this morning that he will be having first seat time with the Lotus F1 car on April 2 at the Paul Ricard Ciruit in France.

The Williams F1 Team launched its 2013 race car the FW35, at the Circuit de Catalunya in Spain, giving them enough time for testing before the Australian Grand Prix commences this March.