Alexander Rossi wins a nail-biter of an Indy 500

Taking place last Sunday May 29th, the 2016 Indianapolis 500 celebrates its 100th running this year, with the first race being run in 1911 and having ran 99 races since then. A good chunk of the month of May is a buildup for the big event, with practice for the Indy 500 beginning as early as May 16th. 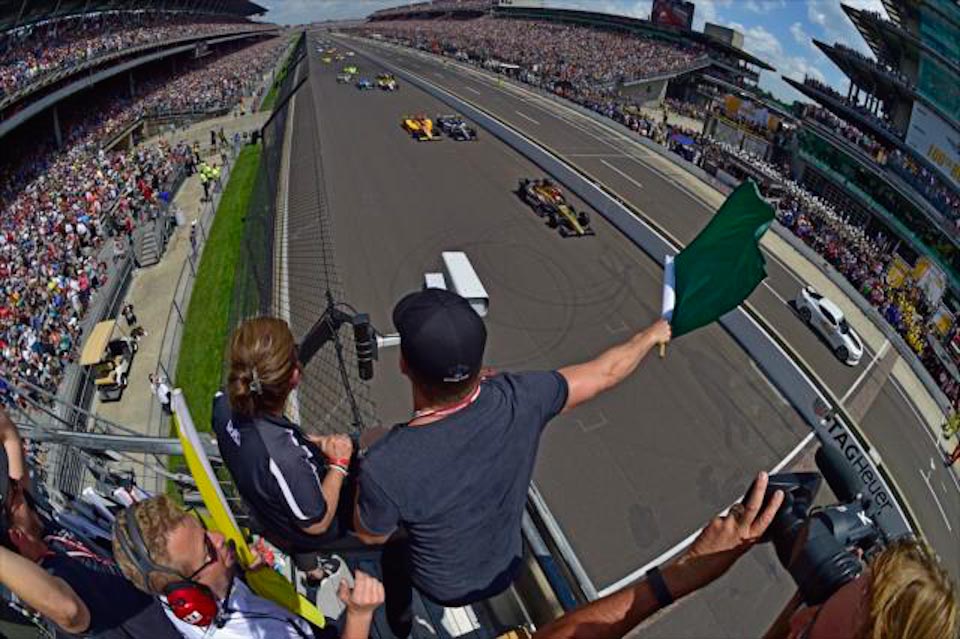 As the green flag waved Hinchcliffe took the lead into the first turn but was soon overtaken by Ryan Hunter-Reay as they got onto the backstraight. Reay would proceed to lead the pack at the end of the first lap. The first portion of the race would see a three-way battle between Hinchcliffe, Reay, and Josef Newgarden. The first round of pitstops would see the race leaders separate themselves from the rest of the pack. On lap 47 a caution flag was waved due to some debris spread on track and took seven laps to clean all the debris up. The green flag waved once again resuming the race on lap 54.

At this point Reay was in the lead with Hinchcliffe constantly challenging him. On lap 64 when the defending champion Juan Pablo Montoya lost control of his car and crashed the outer wall on turn two. This would mark the first time Montoya first DNF in the Indy 500 and another caution flag to be waved. The teams headed back to the pits for a quick opportunity to swap tires and add fuel during downtime. Racing resumed on lap 71 and James Hinchcliffe and Ryan Hunter-Reay once again diced for the lead. 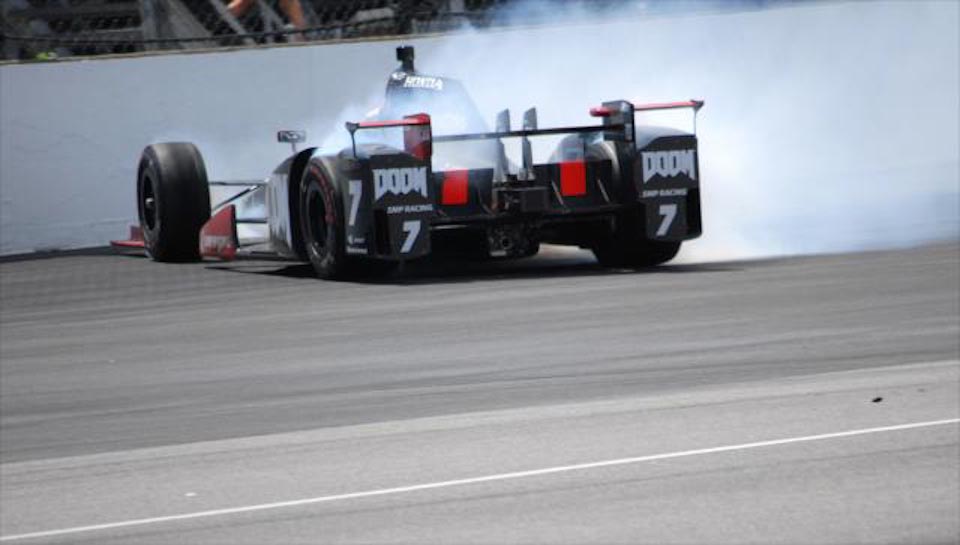 Lap 94 would bring out the third caution of the day, when Sage Karam failed attempt to pass Townsend Bell sent him straight to the wall in turn one. When racing resumed, Castroneves took the lead but was soon overtaken by Ryan Hunter-Reay, Townsend Bell, and Tony Kanaan. The fourth caution flag waved on lap 115 when Mikhail Aleshin's rear suspension broke off, spinning him into the wall of turn one.

As cars made their exit from the pits during the caution period, race leader Bell would clip Castroneves’ car, sending the now former leader into a spin and collecting Reay along the way. Castroneves was not affected by the incident and was able to continue on the race. Lap 121 saw Alex Tagliani and Alexander Rossi in the lead of the pack. They would continue to lead for about 15 laps until the pair had to pit and hand the battle for the lead over to Helio Castroneves and Tony Kanaan. 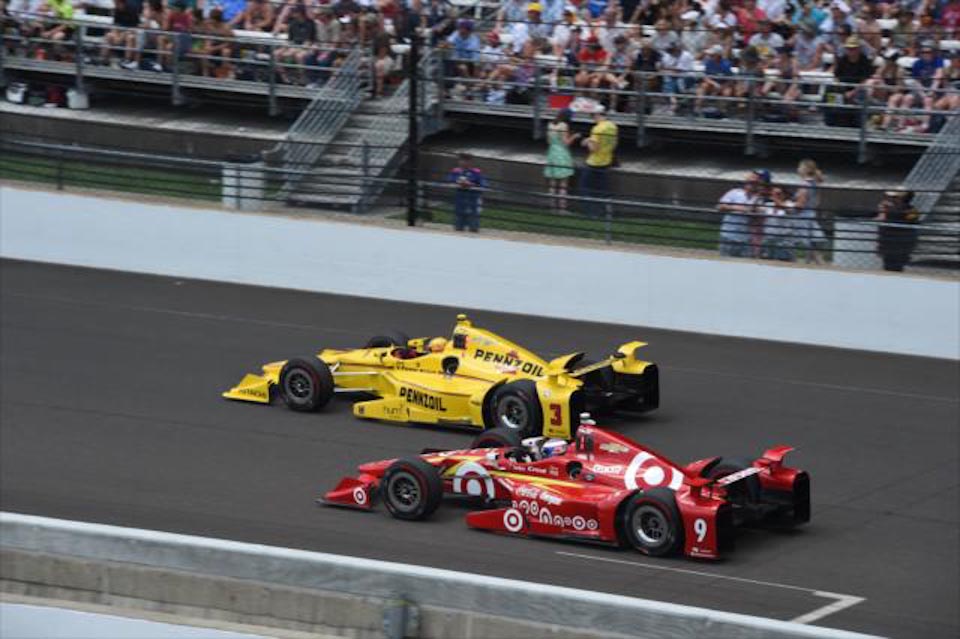 Buddy Lazier brought out the fifth yellow flag on Lap 149 when his tire broke off his car and retire from the race. Racing once again resumed on lap 158 with Castroneves in the lead, albeit a short-lived one as Tony Kanaan took the lead shortly afterwards. A four way battle eventually ensued when James Hinchcliffe and Josef Newgarden joined into the fray. On lap 161 however, Castroneves would lose his chance at contending for the race lead as J.R. Hildebrand clipped his left pod forcing him into repairs at the pits.

The field was packed together again when Takuma Sato crashed on turn four, giving Castroneves a chance to catch up. Now with only 10 laps remaining, the teams realized that they would need a splash of fuel to make it to the checkered flag. In the lead group, Tony Kanaan would pit first, followed by Newgarden a few laps later, and lastly Carlos Muñoz with 5 laps remaining. 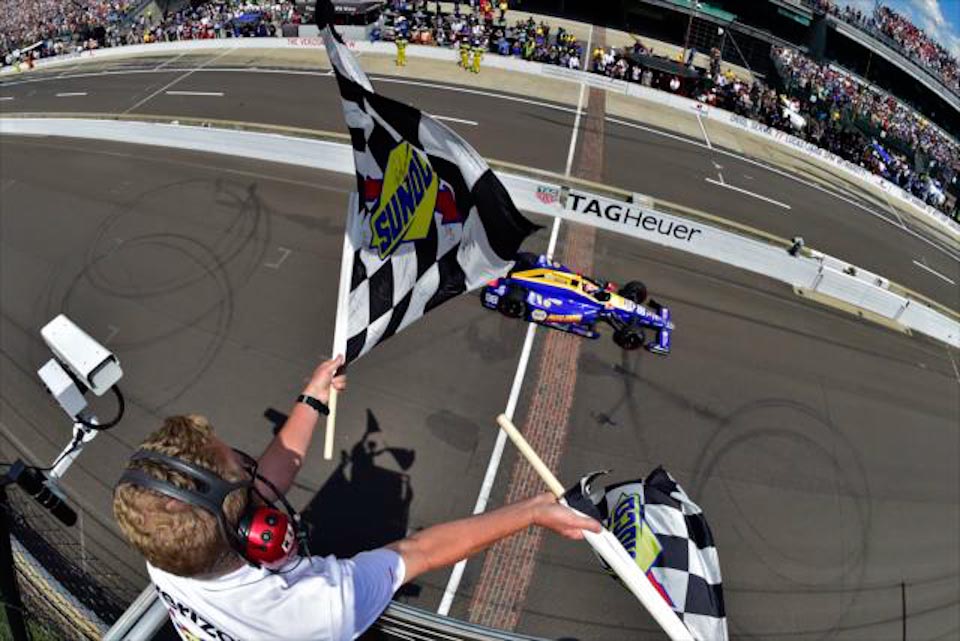 Alexander Rossi however elected to stay on the track and gambled to finish the race without another pit stop. With two laps remaining Rossi slowed down considerably in order to bring the car to the finish. Rossi's 20 second gap was enough for him to cross the line ahead of team mate Muñoz. Rossi would become the first rookie in 15 years to win the Indy 500.

Mazda dresses up all their cars for 100th birthday

Zombie-proof Elantra coupe to show up in 'The Walking Dead'