Eight-time world rally champion Sebastien Loeb will miss most of the 2013 season, his Citroen team said, in order to open the door to the Frenchman’s future participation in the World Touring Car Championship.

The 38-year-old Loeb, who is leading this season’s drivers’ standings in his bid for a ninth title, will only compete in 'three or four' races, including the opening Monte Carlo Rally, according to co-pilot Daniel Elena.

Citroen, in an announcement on the sidelines of the 2012 Paris Motor Show, said: “The most successful duo in the history of the WRC still love competing, despite now taking this step back. They will therefore be taking part in a partial racing program next year, starting at the legendary Rallye Monte-Carlo, which opens the 2013 season between 15th and 20th January.”

Finland’s Mikko Hirvonen, recruited early this year by Citroen, will however race all of the 2013 season, while a third Citroen DS3 WRC will be entrusted to the United Arab Emirates driver Khaleed al-Qassimi.

“Thanks to the partnership agreed with Abu Dhabi, the seven-time World Championship-winning team will continue to compete in rallying, entering three Citroen DS3 WRCs in 2013,” Citroen said. 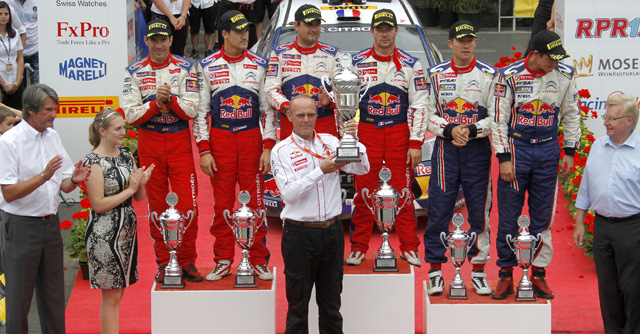 “The works team will feature the Mikko Hirvonen/Jarmo Lehtinen crew for the entire season. As passionate and quick as ever, Sebastien Loeb/Daniel Elena will join them in a partial racing program which is due to start at the Rallye Monte-Carlo.”

Citroen Racing Team Principal Yves Matton said Abu Dhabi’s “partnership will provide us with the means of continuing our program and entering three DS3 WRCs in 2013″.

In addition to a partial WRC season in 2013, Citroen said that Sebastien Loeb will always be considered to work for the team in the future.

Citroen also added that they are “weighing up the possibility of entering the FIA World Touring Car Championship in 2014/2015″.

“This project would give him the opportunity to pursue his career in track racing with the support of the manufacturer with which he has worked since his competitive debut.” Citroen concluded.

Thailand may soon follow the footsteps of Singapore as a host of a Formula One night race if negotiations push through with F1 boss Bernie Ecclestone.

New vs Old: What did Toyota change for the 2020 Fortuner?

Toyota's changes to the 2020 Fortuner are more than skin-deep. Here's what they did.