Subaru WRX STI dominates its class in 24 Hours of Nurburgring

Subaru Techinica International completed 3,629km in 24 hours to claim the SPT3 title in the 2015 Nurburgring 24 Hours. The team started out on pole in SPT3 and ran 143 laps without losing the lead.

The car that ran was a production Subaru WRX STI and equipped with the Japanese spec 2.0 liter engine instead of the international model's 2.5 liter. It was then prepped by doing modifications in the power unit, power train, aerodynamics and chassis rigidity. The driver roster for this year's endurance challenge were Tim Schrick, Hideki Yamauchi, Carlo van Dam and Marcel Lasée.

Carlo Van Dam was the driver for the first stint with Yamauchi and Lasée maintaining the lead in their respective stints. Local ace Tim Schrick extended the gap even further when he did his laps around the track. The night half of the race was extra challenging with constantly changing weather conditions, hampering visibility and traction. The team pulled through the night without incident. 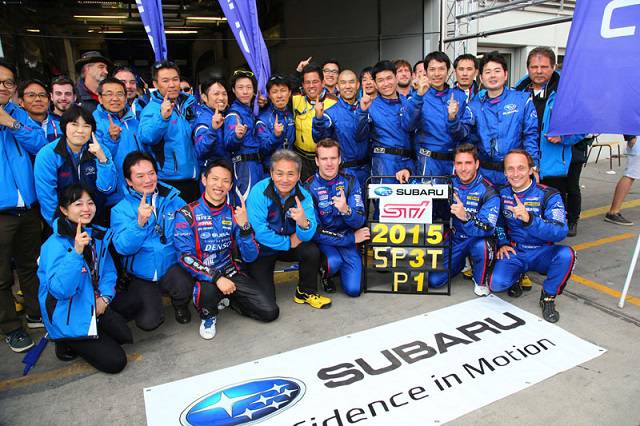 Yamauchi took the chequered flag after 4:00 PM and was ahead of the second place car by 37 minutes and 11 laps. It marks STI's third class win in the Nurburgring 24 hours since their back to back victories in 2011 and 2012.

STI General Team Manager Hideharu Tatsumi said, “We were able to run a perfect race this time. Had it not been for the drivers, engineers, mechanics and team staff all working together, we wouldn’t have made it. I am pleased that we could prove again the excellence of Subaru for our fans around the world. I would like to thank them for their support.”

The no. 28 Audi R8 LMS wins in Nurburgring 24 Hours debut