The long wait is over for Takuma Sato. Eight years after joining the Indy Racing League, the Japanese driver has won his first Indy 500. Sato becomes the third different driver to win the Indy 500 in four years. The 101st running of the race also saw Fernando Alonso make his first appearance in the series.

Scott Dixon took the lead when the green flag but making a strong start was Will Power, springing from ninth place to second. Power lost momentum later in the lap and was soon overtaken by Tony Kanaan and Ed Carpernter. Alonso meanwhile was making good progress, entering the top six less than 20 laps into the 200 lap race. 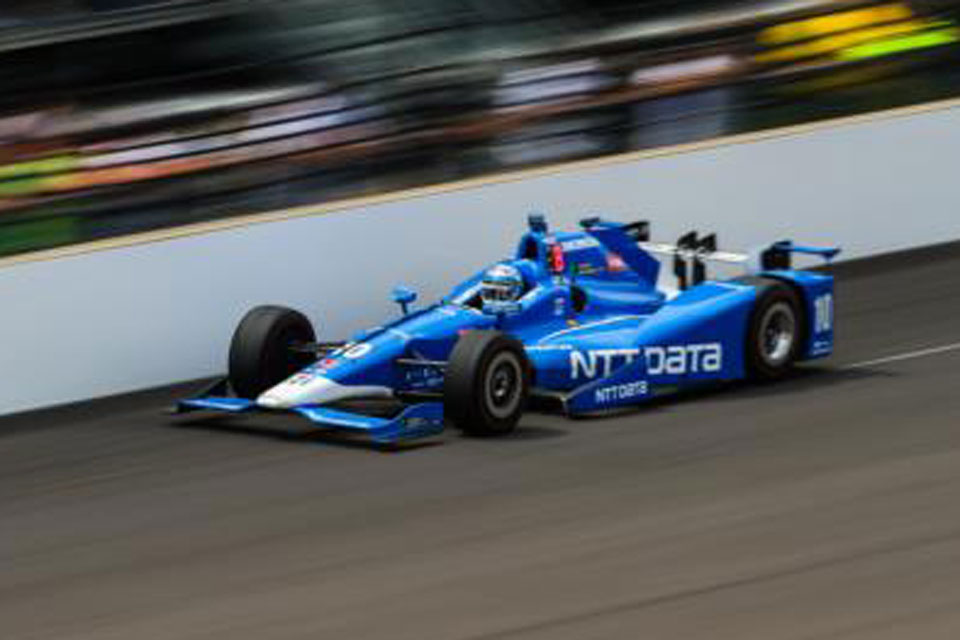 Kanaan took the lead after getting a good draft off of team mate Dixon and the top ten were all covered within a second of each other. Just before the first round of pitstops, Dixon began struggling with his car, losing momentum and quickly dropped out of pace. Kanaan dove into the pits first and the rest of the field followed suit. After a flurry of lead changes, Carpenter assumed the top spot but was uncer increasing pressure from last year's winner, Alexander Rossi.

Carpenter was struggling with that handling of his car and eventually conceded the lead to Rossi. Alonso followed Rossi to take second place and later drafted Rossi to take first. The two would continue swapping for the lead, drafting each other lap after lap. Sato meanwhile was slowly making his way to the top.

Disaster struck Dixon when he was collected by the stricken car of Jay Howard. The impact sent Dixon airborne before violently crash landing on top of a barrier. Helio Castroneves was almost involved in the crash but was able to drive under the flying car of Dixon. Fortunately, the former champion was able to walk away from the spectacular crash unassisted. Howard was also unscathed from the incident. With debris littered all over the exit of turn two, the race was momentarily red-flagged.

When racing resumed, Sato was now leading the race with Rossi, Ryan Hunter-Reay and Alonso in tow. Racing continued with a close fight for the lead with the top ten being within 1.5 seconds within each other. The yellow flag was brought out yet again after Conner Daly slammed into the wall. Jack Harvey spun out trying to avoid flying debris but lost control, also sending him to the barrier. 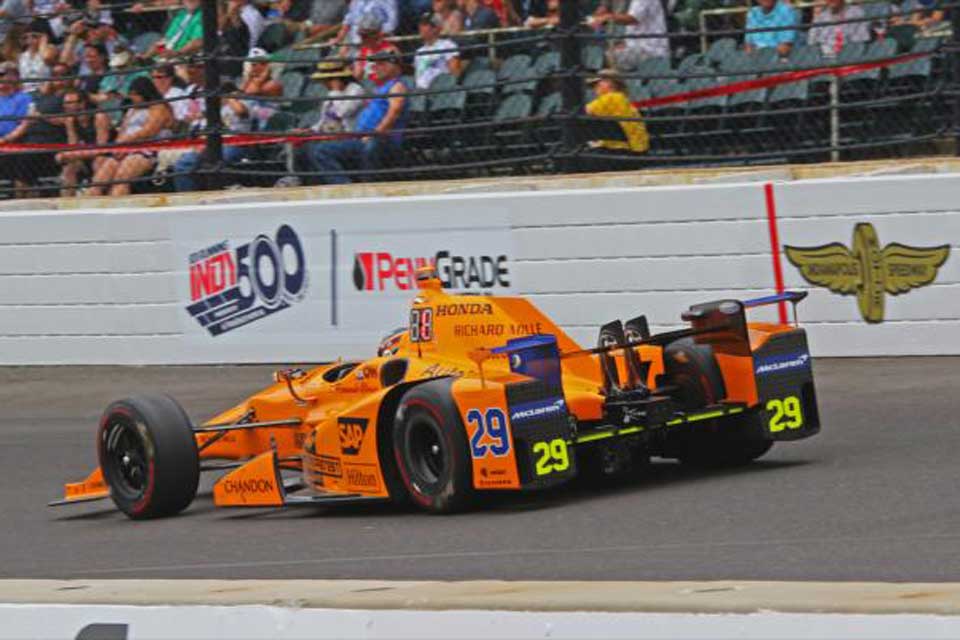 On restart, Max Chilton took the lead and other close fight would begin. Hunter-Reay drafted at the back of Chilton with Rossi and Alonso sticking close to the rear wing of the leader. Castroneves was soon part of the scrap and was able to take the top spot before the next wave of pit stops. The race went on with no incident past the halfway point.

Then, on lap 122, Buddy Buddy Lazier crashed at the exit of turn two. After another safety car period, Hunter-Reay continued to lead the race but close behind was Alonso. The two would be neck and neck even after two more yellow flag periods. It went on for another ten laps until Hunter-Raey's engine expired. Chilton later took the lead when Alonso pitted. Behind him were Kimball, Hildebrand, Davison, Rahal, Pagenaud, Jones and Andretti. Charlie Kimball took the lead later on. 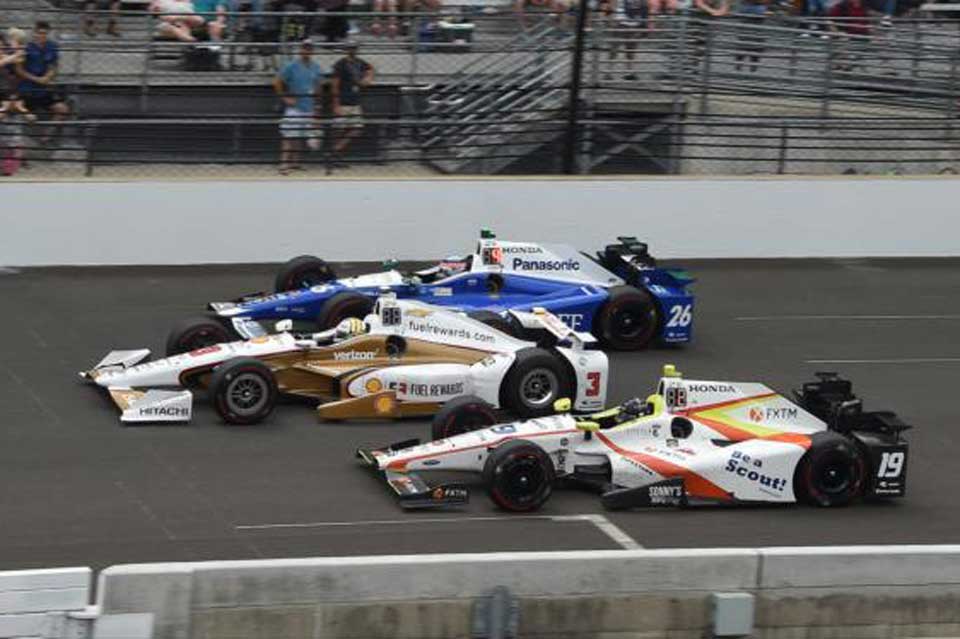 Kimball's run for the lead would be short-lived when his engine gave up, giving the lead to back to Chilton. At this point, the pack was bunched up yet again and Sato was in contention yet again. Rookie Ed Jones then made a brave move on Castroneves to tuck in behind Chilton. At this point, Alonso was making his move to get back in the top five until his engine blew, ending the Spaniard's strong Indycar debut. After Alonso's engine troubles, it didn't take long for another yellow flag period, brought out by an accident that involved Power, Josef Newgarden and James Hinchcliff. It would be the last yellow flag period of the race.

It would be a eleven lap shootout for the win between Chilton, Castroneves and Sato. Chilton defended his lead against Castroneves but the three-time winner got a good run and was able to slingshot his way to the top. Sato later made his move on Chilton and overtook the Briton on the outside. 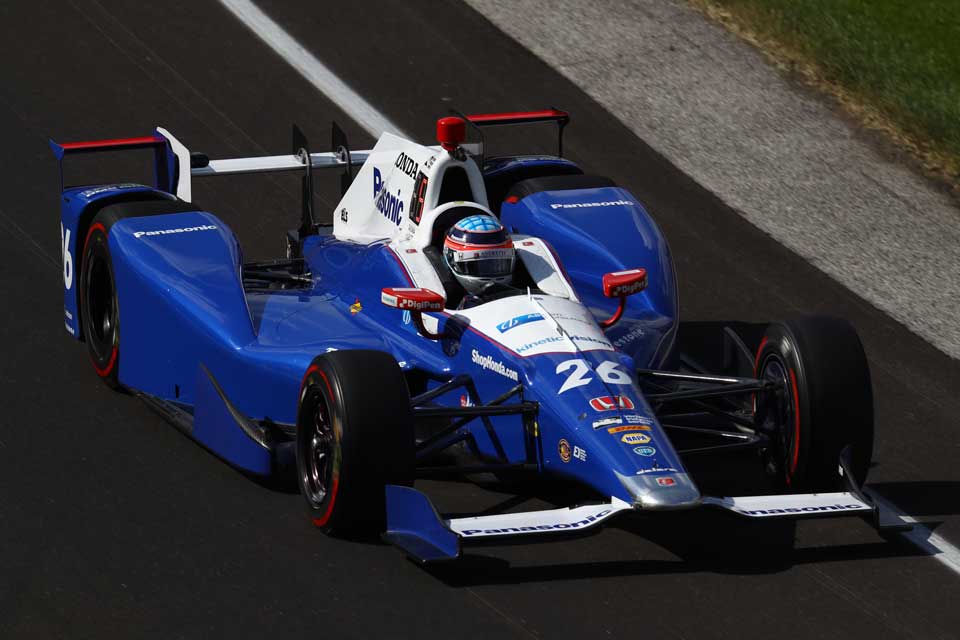 With less than five laps to go, Sato made his move for the lead, passing Castroneves on the outside. Sato was able to hold on to the lead by closing the inside line on Castroneves. Despite Castroneves' best efforts, Sato's defense was enough for him to take his first Indy 500 win.

Jones took third place and behind him were Chilton and Kanaan. Despite having a mostly quiet race, Juan Pablo Montoya kept his car clean and finished sixth. Rossi, last year's winner, took home seventh and rounding up the top ten were Marco Andretti, Gabby Chaves and Carlos Munoz.

Despite an impressive start to his Indy 500 debut, Fernando Alonso retires on lap 179 after suffering engine failure

DOTr and LTFRB urged to review franchises of PUVs

Toyota almost didn't win the 24 Hours of Le Mans... but they did

Not diesel: Mercedes-Benz EQV can haul families with no emissions