Subaru unveils pair of vehicles for campaigning in 2016 racing season

Fuji Heavy industries, alongside its motorsport subsidiary Subaru Tecnica International Inc. (STI), have set this year’s Tokyo Auto Salon as the venue for the debut of their motorsports campaign for 2016. Their pair of racing cars on display, while both being technically touring cars, serve very different goals. Each have specific events to participate in, and are thus set up differently. 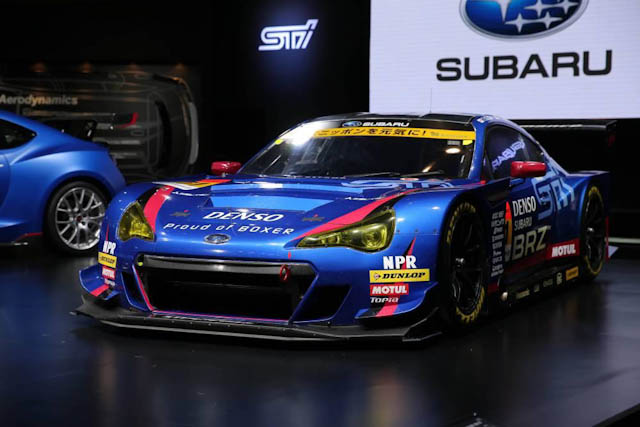 The Super GT series is widely acknowledged as Japan’s highest tier among its motorsports categories, and with intense wheel to wheel races held across japan (and in select foreign circuits) throughout the season, Subaru enters the fray this year in a BRZ specced for the GT300 class.  Powered by a competition-spec 2.0 liter boxer engine, the BRZ GT300 puts out 320 PS and 441 Nm of torque. The 2016 BRZ GT300 aims to optimize its boxer’s low center of gravity alongside improvements such as a change in front tire sizes (from 300/680/R18 to 330/710/R18) to enhance cornering capability. Super GT races are often split between two drivers, and for this year Takuto Iguchi and Hideki Yamauchi will once again take the wheel for STI’s entry.

The Nürburgring 24-hour (N24h) is an endurance race that takes place annually in Nürburg, Germany, with STI competing on its ninth consecutive year this year. On May 26-29, 2016, STI will aim once again to win in the SP3T sub-2 liter turbocharged class, wherein it won thrice prior in 2011, 2012, and 2015. The 2016 N24h WRX STI will be defending Subaru's honor with a turbocharged 2.0 liter boxer engine that punches out 340 PS and 461 Nm of torque. The 2016 N24h WRX STI is geared to make full use of the Boxer engine’s inherent low center of gravity to improve on cornering speed. Changes from the prior 2015 version include enhanced front downforce, more body lightening, and engine settings that would suit restrictor size changes from the 2016 regulations. Driver roster for this year’s N24h remains the same, with the class-winning team of Hideki Yamauchi, Marcel Lasée, Carlo van Dam, and Tim Schrick splitting driving duties between the 24 hour stint.