At the drivers' meeting for the third and final leg of the 2014 Toyota Vios Cup season, Toyota and the organizers announced their plans and changes for the finale, particularly with regards to the street circuit, the rules and other things that will make up the race weekend. 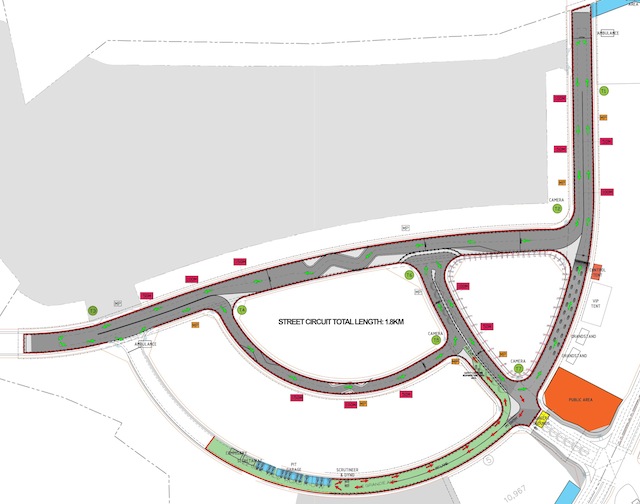 The tight and tricky circuit will measure 1.8 kilometers long with a total of 7 turns and a main straight that is about 400 meters long. For the safety of the drivers and spectators, the McKinley Hill West Street Circuit will be laid out using concrete barriers, Armco guardrails and catch fences to meet Toyota's high safety standards.

This will be the one and only time that a car manufacturer will be able to stage a race here as the construction of the luxury condominium development will resume afterwards.

Due to the short track length, the confirmed grid of 37 cars will be split into two with the top 20 qualifiers in the Vios Cup (customer) class in one division, while the rest will line up on the grid with the drivers in the Media and Celebrity categories for a separate race. More on that later.

Organizers also made a rather controversial rule change: double points for the special venue for the finale.

Points leader Jason Choachuy was understandably apprehensive about the change in the points system given that he has 75 points as opposed to Luis Gono which has 49 points. Choachuy only needed a minimum of 14 points to take the title as champion of the 2014 Toyota Vios Cup season. The new points system will effectively open up the championship.

Despite the protest, the new double points will take effect for the last round.

Strict on penalties for accidents and collisions

Organizers and race stewards will be very strict in handing out penalties to drivers with regards to on-track collisions with other drivers or with the track.

A driver will be penalized anywhere between PhP 1000 to PhP 5000 if found at fault for causing avoidable contact with another driver.

Should a driver damage the Armco guardrails, concrete barriers, catch fences or other trackside equipment necessary for the street race, he will be liable for cost of repair.

Also, given that the course being used is a tight street circuit wherein any accident can cause a red flag situation (i.e. misjudging and blocking a hairpin, et al), the driver or drivers found to be at fault will also be handed a stiff grid penalty should they be able to make the restart. 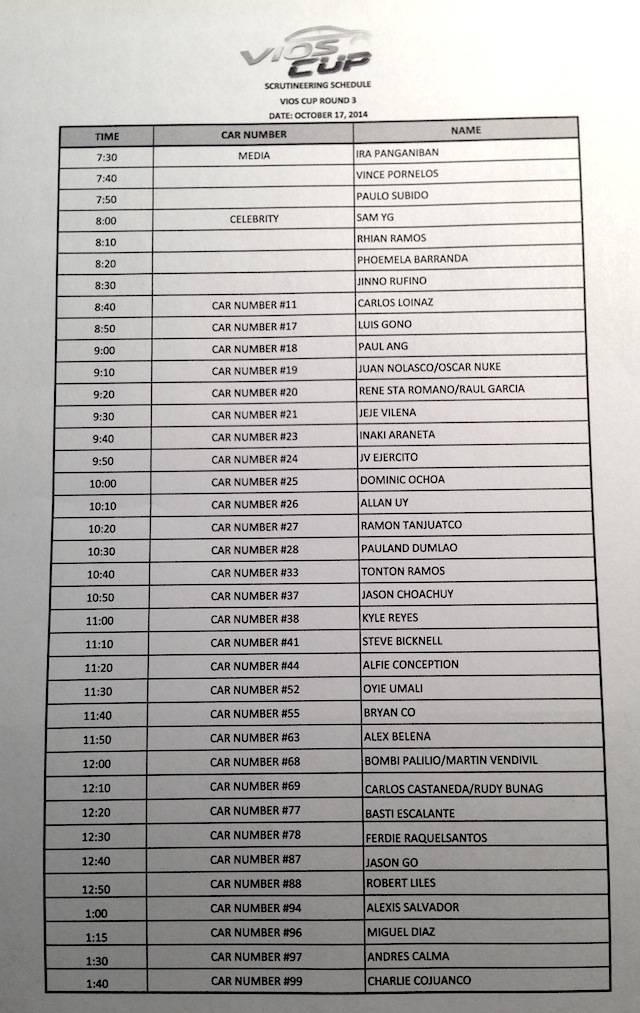 A Senator and a Governor will suit up for the race

Joining the Vios Cup customer class will be a variety of new drivers, including several political leaders. Senator JV Ejercito himself will be racing as he purchased a Vios Cup car, and likewise for Governor Oyie Umali of Nueva Ecija and several other political figures from his province.

In the Celebrity division will be Phoemela Baranda, Sam YG, Jinno Rufino and Rhian Ramos. Fabio Ide will not be joining this last leg due to a scheduling conflict.

In the Media division, Ira Panganiban of Autocar Philippines, Paulo Subido of Top Gear Philippines and Vince Pornelos of AutoIndustriya.com will be suiting up again for the races. 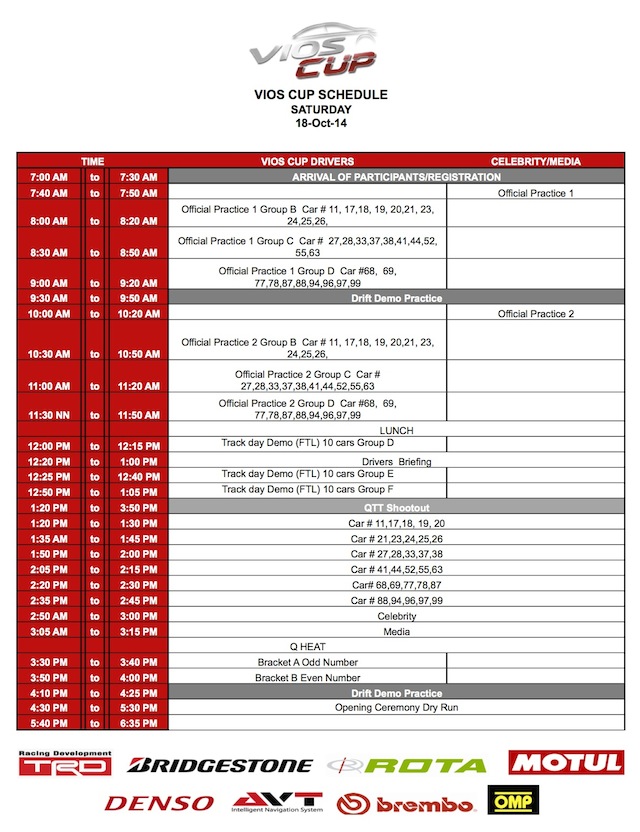 Qualifying will be straightforward for the media and celebrity drivers, though it will be a bit more complicated for the Vios Cup customer cars.

The top 10 from each qualifying race will comprise the 20 drivers who will drive in the main two races for the points. The remaining drivers who were unable to qualify will line up on the grid with the Media and Celebrity division. 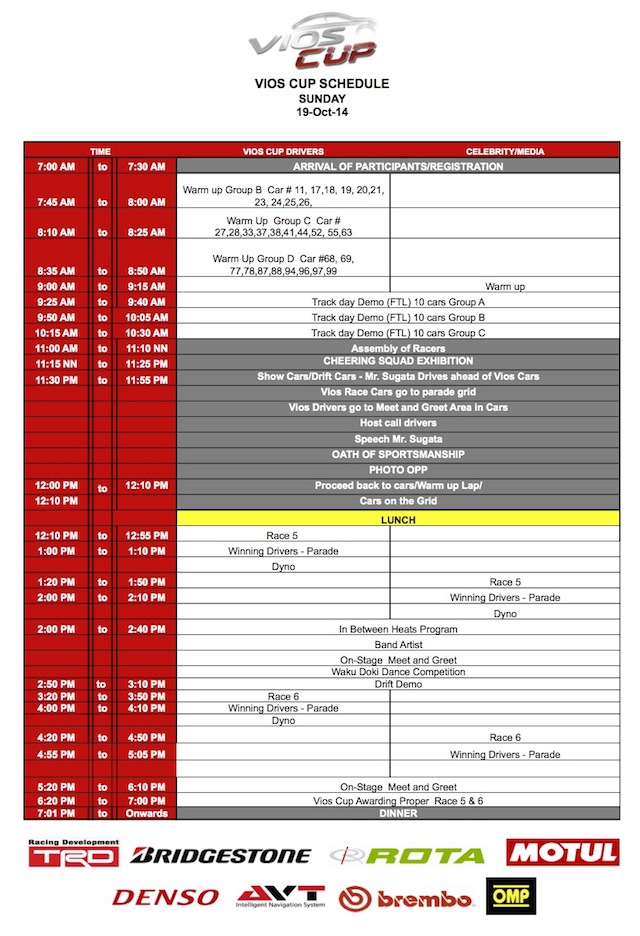 October 19: Four races, trackdays and a drift demo from the Drift King

There will be 4 races total on Sunday, October 19. The Vios Cup drivers who qualified for the main races will have two heats of 20 laps; about 20 minutes for Race 5 and Race 6 each.

The 17 Media, Celebrity and the remainder of the Vios Cup customer drivers will go wheel-to-wheel together in a separate Race 5 and Race 6.

Amidst all that, the numerous Toyota car clubs will have a chance to try out the racetrack in Follow-The-Leader format. Also the Drift King himself, Keiichi Tsuchiya, will once again give a drift demo at the wheel of a Toyota 86.

So, want to watch the 2014 Toyota Vios Cup Season finale in Manila? Head on over to McKinley Hill West on October 18 and 19 for plenty of high octane action. There is also a concert afterwards featuring Up Dharma Down and Pulso on Sunday night after the races.

Admission, as always, is free.

Advisory: there is no parking at the venue for spectators, so it's best to leave your car at McKinley Hill (East). Toyota will be running a shuttle service but the exact route has yet to be announced.