At a dinner last night in Makati City, Toyota Philippines president Michinobu Sugata announced that the third and final leg of the 2014 Toyota Vios Cup Season will be held on a specially prepared street circuit at Mckinley West in Fort Bonifacio.

Prior Vios Cup races have been held at the Clark International Speedway in Pampanga. Originally there were supposed to be races in the Batangas Racing Circuit but due to the remote location of the track, Toyota chose to forego the BRC legs and eyed a street circuit within Metro Manila.

The announcement by TMP president Sugata dispels the rumors that the location of the much awaited conclusion to the 2014 Vios Cup Season will be in the vicinity of the Solaire Casino in Paranaque City. Toyota executives told us that they were unable to secure permission for a crucial road (the rights to which are held by a separate entity) in order to complete a street circuit shaped like a small letter 'h'. As a result, race organizers turned to Megaworld for their McKinley West development across from their McKinley Hills (i.e. Venice Piazza) on Lawton Avenue, Taguig.

Toyota executives shared with AutoIndustriya.com their proposed layout of the track but requested that we hold off on publishing the layout in full so as to prevent clandestine practice sessions by the race participants in order to gain an advantage on the track. Below, however, is the general map of the McKinley West development at Fort Bonifacio. 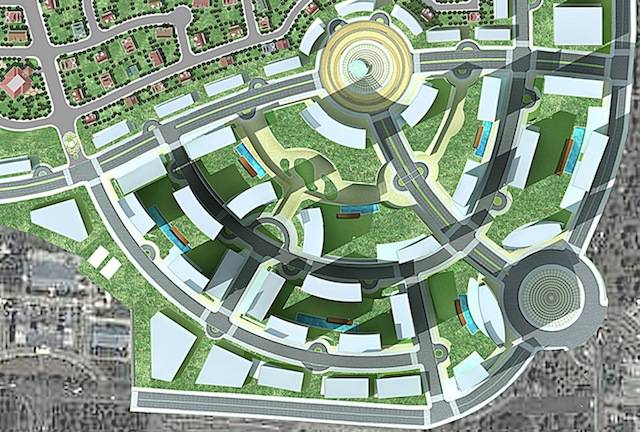 The track layout isn't final, but it will have a total length of 1.7 kilometers (thereabouts) with a main straight that is about 400-450 meters long and can accomodate 10 Vios Cup cars side by side at a time. Based on the proposed course layout there are 7 corners total of which 4 are tight hairpins. There will also be a fast left sweeper. The width of the infield section will be wide enough for about 8 cars.

Being a highly promoted series, the street circuit must meet the strict safety standards of Toyota. Expect safety devices such as Armco barriers, catch fencing and other equipment necessary for the safety of the participants and spectators.

Unlike street circuits such as Monaco, Singapore or Macau, the McKinley West street course can only be used once as development of the luxury condominiums will continue afterwards.

Street circuits were relatively common back in the 70's and 80's as Filipino motorsports legends (Pocholo Ramirez, among others) used to race sports cars, touring cars and even open-wheel Formula cars in areas such as pre-CBD Ortigas, Greenhills and even at the Quirino Grandstand/Manila Hotel complex.

Toyota also shared with us that the finale of the 2014 Vios Cup Season will be a 2-day affair on the street circuit as there will be races on October 18 and 19, 2014. A concert is also in the works (much like the previous two Vios Cup events plus the Exhibition Race) as well as an appearance by the Drift King, Keiichi Tsuchiya; tentative, of course.

Needless to say, the conclusion of the 2014 Toyota Vios Cup Season is going to be very interesting.