Will attempt to win another Driver and Manufacturer championship for Volkswagen

The Volkswagen Motorsport team was sent off by no less than Chairman of the Board of Management of Volkswagen AG, Prof. Dr. Martin Winterkorn, and Volkswagen Board Member for Technical Development along with Dr. Heinz-Jakob Neußer, to the opening leg of the WRC season from 14 to 19 January in Rally Monte Carlo.

In a symbolic gesture, the 315-hp Polo R WRC rolled over the start ramp in front of the main Volkswagen plant in Wolfsburg. Prof. Dr. Winterkorn was there in person to wave the starting flag as the team departed for the first of the World Championship’s 13 rounds on four different continents. 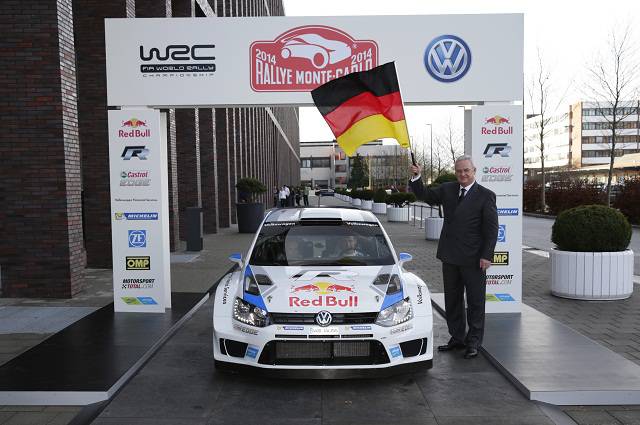 “The entire Volkswagen team performed magnificently in 2013 and won all three titles in the WRC. The key now is to follow on from this success. That means no arrogance or complacency, but maximum concentration and desire to win once again. If the team is able to heed this advice, we could do even better this year. That will obviously not be easy. Winning the titles was a milestone for the Volkswagen brand. Motorsport is not an end in itself for us – we compete to demonstrate the outstanding quality and innovation of our brand and our cars. The Polo R WRC is, after all, based on a production chassis that is manufactured in Pamplona. The fact that we won the championship in such dominant fashion makes the entire Volkswagen brand shine that little bit brighter,” said Prof. Dr. Martin Winterkorn,
Chairman of the Board of Management of Volkswagen AG.

“The WRC is a very near to my heart. The Polo R WRC’s first year was simply breath-taking and demonstrated the performance of our products at the very highest level of competition for production-based vehicles. When developing the Polo R WRC, our engineers on the production side worked very closely with the motorsport department. That was not only a good experience for both sides, but was also extremely successful. On the one hand, because the motorsport engineers confronted their colleagues from production development with fascinating questions that do not always come up when developing cars for everyday use. On the other hand, because the production developers were also able to provide solutions that you would not necessarily contemplate in the world of motorsport. The best example of this was the heart of the Polo R WRC – the engine,” said Dr. Heinz-Jakob Neußer,
Volkswagen Board Member for Technical Development.

“There are only 61 days between the final special stage of last season and the first of the coming Rally Monte Carlo. No other world championship has such a short break. Testing and preparations have been running at full throttle since November, and we are well prepared to start the new season as defending champions. Today’s event was symbolic – starting out from Wolfsburg shows that the entire company is behind us. As far as I, my co-driver Julien Ingrassia and our team are concerned, we are ready for the 2014 World Rally Championship,” said Sébastien Ogier, Volkswagen works driver and defending WRC champion in the Drivers’ Championship.

The latest Formula One documentary '1' is set to make its big screen debut in London on January 10.

Vettel and longtime girlfriend Hanna Prater are expecting this month