After two straight opening race wins for Honda this year, Citroen held back the Japanese marque's charge by winning both opening and main races in this year's WTCC Race of Hungary. The opening race was won by Mehdi Bennani while winning the main race was Jose Maria Lopez, who took the lead in the standings afterwards. 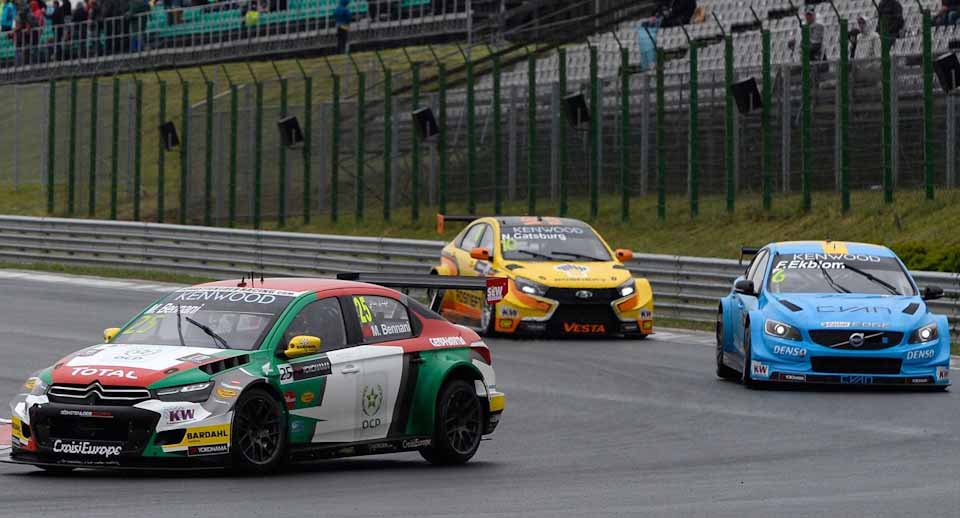 The race started with a fully drenched racetrack and the rain only stopped two hours before the race. Teams had various tire strategies for this year's Hungarian round with Mehdi Bennani, sporting full wet tires, taking the first spot on the grid. Alongside him was Volvo driver Fredrik Ekblom, also running wet tires. Third on the grid was Citroen's Yvan Muller, taking a gamble by running with full slicks. 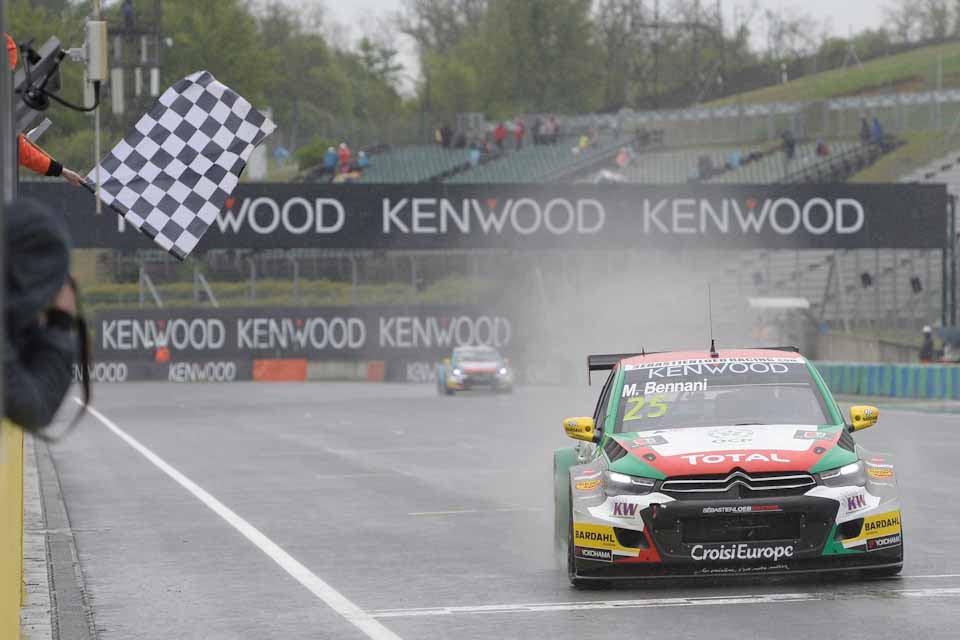 During the formation lap, Gabriele Tarquini dove into the pits to get a sull set of wet weather tires. Drama would hit local hero Norbert Michelisz during the formation lap with his Civic's engine expiring before lining up for the start. When the green lights lit, Muller was able to pull ahead of Ekblom but ran wide entering the second turn. As a result, Muller gave second place back to Ekblom and slid back to fourth when Nicky Catsburg capitalized on Muller's tire gamble. At this point, everyone running on slicks were sliding backwards through the field. Bennani was uncontested throughout the race, leading the race from flag to flag.

Running full wet tires, Tom Chilton charged near the front of the pack and was soon chasing Ekblom and Catsburg for podium spots. The two would later suffer fading performances from their cars, promoting Chilton to second place. Catsburg was able to hold on to third place while Ekblom finished fourth. Tarquini's last-minute decision to switch to full wet tires paid off with a fifth place finish, ahead of team mate Hugo Valente. Gregoire Demoustier finished seventh with John Filippi in eighth. Ferenc Ficza and Rene Munnich round up the top ten. 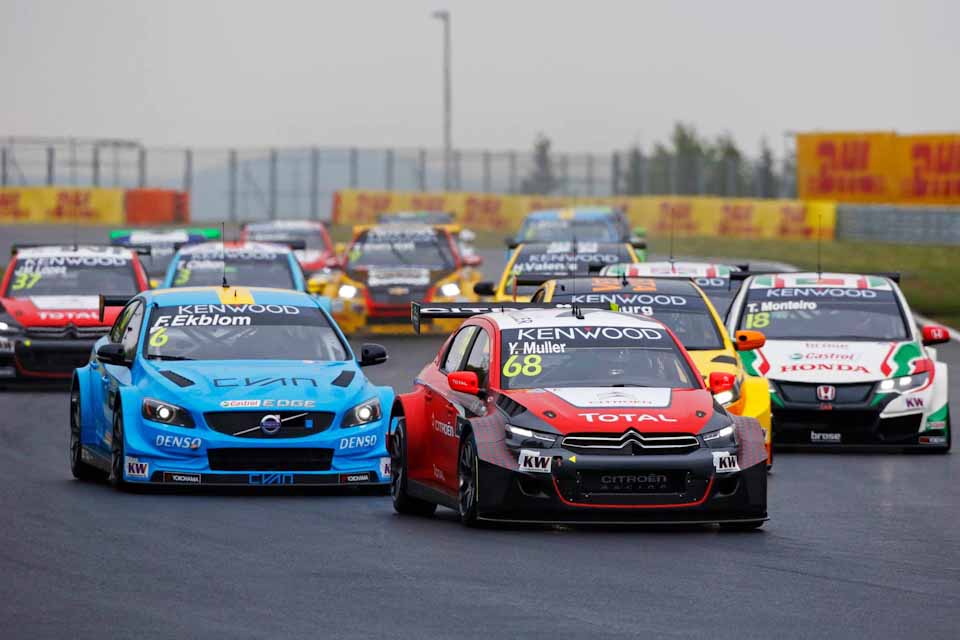 With the lessons learned from the first race, everyone decided to run full wet weather tires for the main race. Sitting on pole position was Jose Maria Lopez with Tom Coronel filling the second slot. In third was Tiago Monteiro, setting the fastest time for Honda's factory outfit.

Lopez had a good start, leading the pack as the rest of the field scrambled for position. Team mate Yvan Muller made a rocket start, challenging Coronel before the first turn. Coronel then ran wide in turn two, allowing Muller to take second place. Rob Huff took advantage of Coronel's mistake and was able to cling on to the final podium spot. Meanwhile, Tiago Monteiro dropped to fifth following contact with opening race winner, Mehdi Bennani. Bennani was later penalized with a drive through penalty, allowing Monteiro to regain fourth. 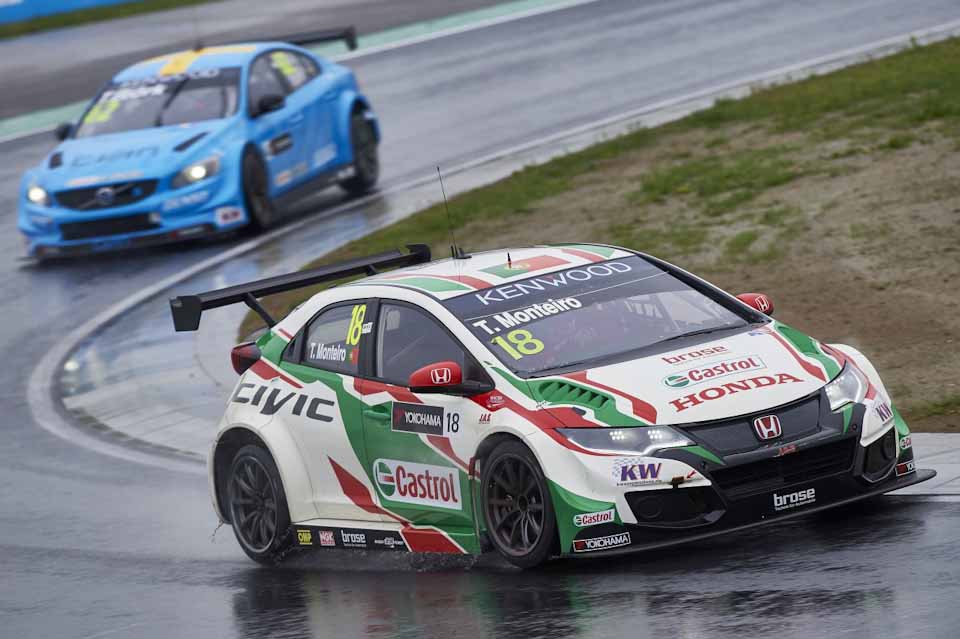 The safety car was deployed when Gregoire Demoustier’s Citroen crashed out at Turn 1, bunching the field together. When racing resumed, it was Lopez, Muller and Huff fighting for the lead. Huff would later run into the back of eventual winner Lopez and was handed a drive through penalty for causing a collision. Despite that, Lopez would keep the lead and drive further away from team mate Muller for the win. Monteiro struggled throughout the race but was able to hold on to third. Thed Bjork would finish fourth, followed by Tom Chilton in fifth. Huff was able to salvage sixth following his penalty while Tom Coronel crossed the line in seventh. In eighth place was Mehdi Bennani, Hugo Valente finished ninth and rounding up the top ten was home crowd favorite, Norbert Michelisz.

The next race will be the WTCC Race of Morocco which will be held at the Marrakech Street Circuit. Qualifying sessions will be held on May 7, followed by the race on May 8.