Tiago Monteiro is continuing his strong 2017 campaign following his win in the opening race in Hungary. It was then followed by a strong finish in the main race, further stretching his championship lead. Mehdi Bennani meanwhile bounced back from his DNF from the last round to claim his third career victory in WTCC. 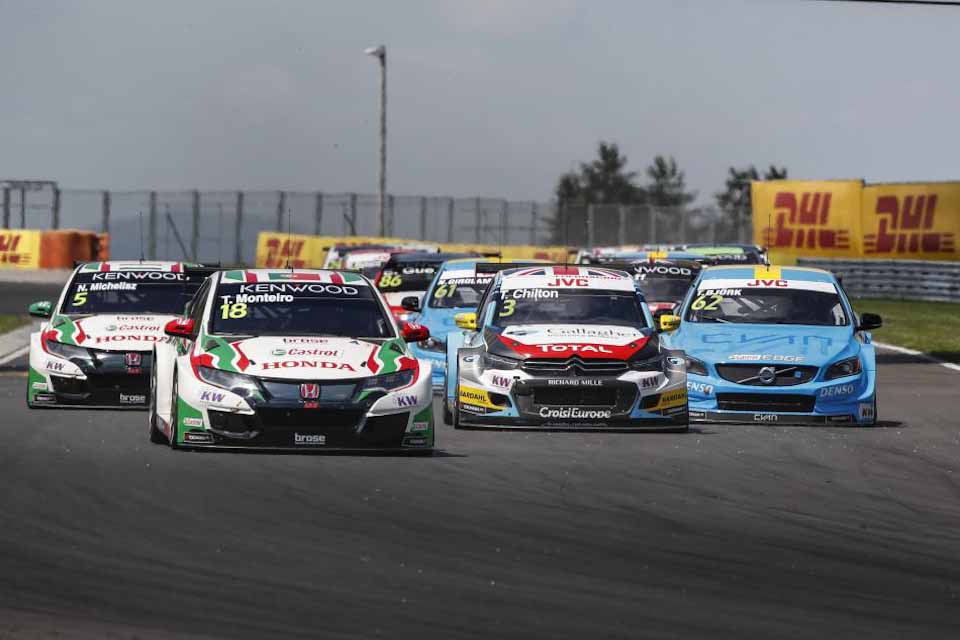 With the reverse grid layout, John Filippi started on pole with Monteiro alongside him. Thed Bjork took the third grid position and in fourth was Tom Chilton.

Once the race started, Filippi quickly lost the lead after stalling on the grid. The stationary Citroen caused a bit of a traffic jam and Monteiro quickly capitalized on the situation. He took the lead but right behind him was Chilton who was able to overtake Bjork despite having to veer clear of his stricken team mate. At this point, it was becoming a close fight for third as Bjork and home crowd favorite Norbert Michelisz repeatedly bashed fenders for the final podium spot. The two would later end up with damaged cars and drop off in pace. 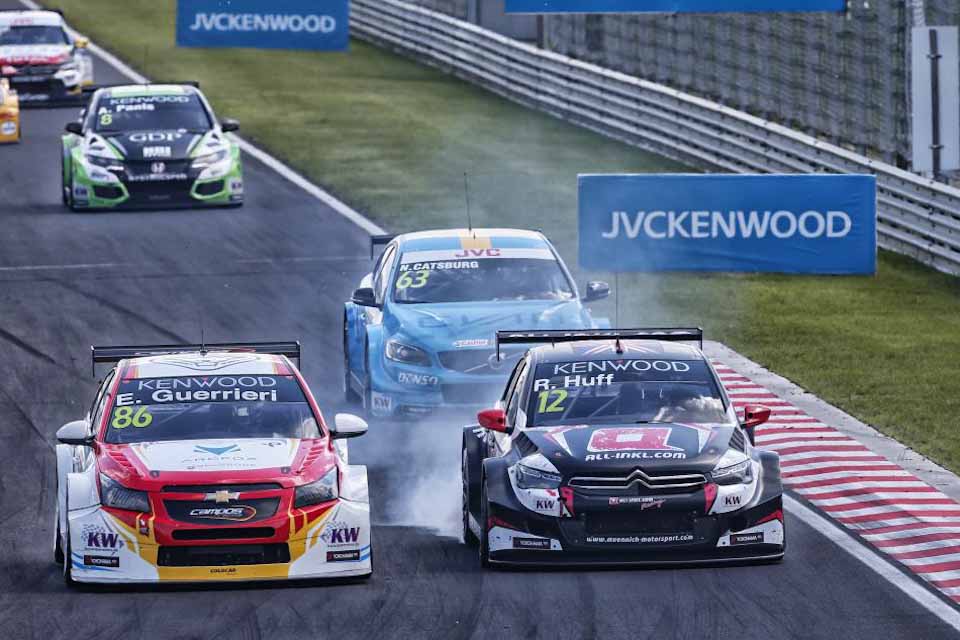 As Michelisz and Bjork continued to slide down the order, Nestor Girolami took third place. Further back, Rob Huff was quickly dicing through the pack from tenth place. Series rookie Esteban Guerrieri was also showing a strong performance, jumping to fifth place and was locking horns with Volvo's Nicky Catsburg throughout the race. As the rest of the field jockeyed for position, Chilton and Monteiro drove away from the pack as the latter kept a steady lead.

Monteiro would later win the race unchallenged, holding a 0.768 second gap over Chilton. It was a much closer race for third as Rob Huff, coming from tenth, was within reach of Girolami. Huff was close to the rear bumper of Girolami and made his move on the penultimate lap. A good exit in turn 1 allowed Huff to dive inside Girolami on turn two and drove away with the final podium spot. Catsburg meanwhile was able to sneak past Guerrieri to claim fifth place in a race-long battle for the top five. 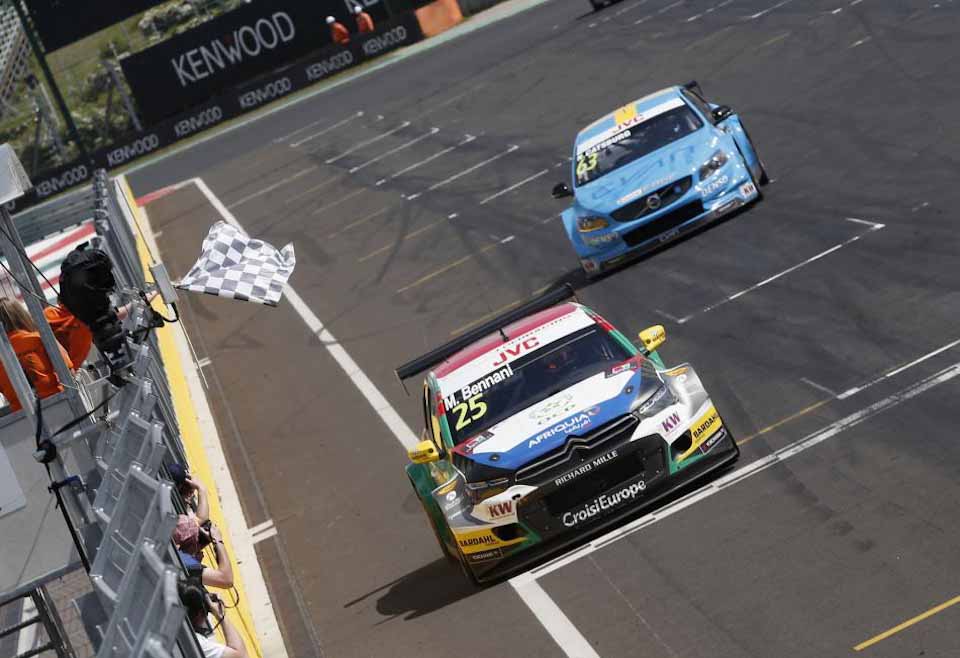 Taking pole for the main race was Rob Huff and locking out the front row was Mehdi Bennani. Behind them were Esteban Guerrieri in third and Nicky Catsburg in fourth.

Huff had a slow start to the main race and tried to keep his lead as much as he could from Bennani. Bennani however had a good launch, allowing him to snatch the lead from Huff. Huff was also coming under increasing pressure from the Volvos of Guerrieri and Catsburg. The Volvo duo were able to pass Huff on the first turn but Huff made a bold attempt to take on the two with a late-braking maneuver that made him run into the back of Catsburg. With nowhere to go, Catsburg speared into the side of his team mate, Guerrieri, with the latter being forced to retire for the race. 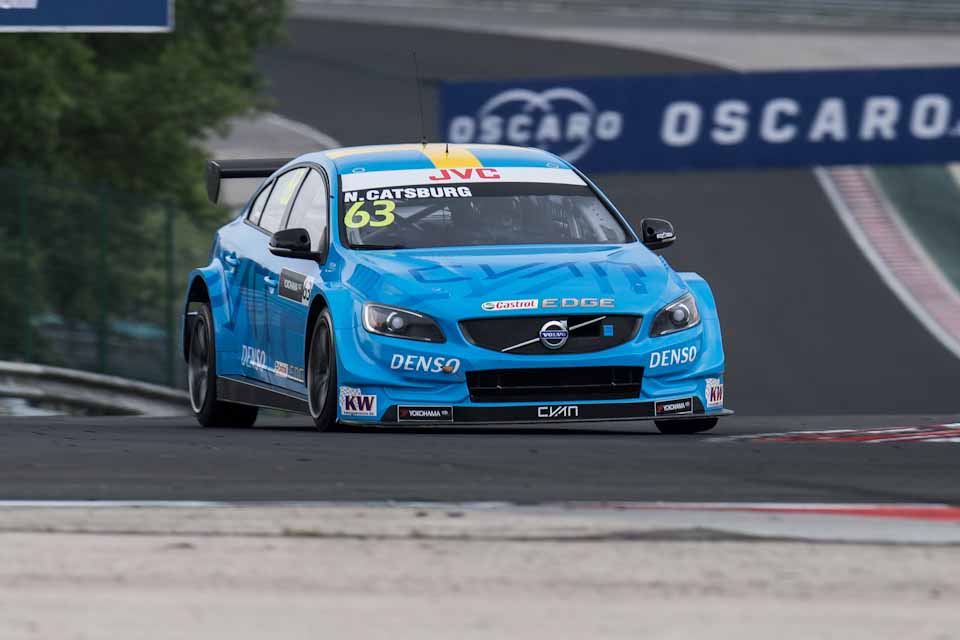 With the two Volvos out of the way, Huff tried to chase Bennani and was able to reclaim the lead from the Morrocan driver. Unfortunately for Huff, the incident brought out the safety car to recover the broken Volvo of Guerrieri and bunched up the field. Stewards also penalized Huff for his part in the turn two incident. When racing resumed, it was Catsburg, despite having a wounded car, who was in hot pursuit of Bennani. Bennani later responded with a series of quick laps, allowing him to pull away from Catsburg. Tom Chilton meanwhile was under pressure from Norbert Michelisz for third place. Opening race winner Tiago Monteiro meanwhile was comfortably sitting in a points scoring position.

Catsburg was slowly reeling in Bennani towards the end of the race but ran out of laps to mount a challenge. Bennani then crossed the line first with Catsburg just a little over half a second away from winning his first race of the season. Chilton was able to hold off Michelisz for third place and denied the latter of a podium finish in front of his home crowd. Following his win in the opening race, Monteiro had a quiet main race, finishing in fifth place.

Mercedes-AMG's pit strategy pays off with win in Barcelona