Seeing a car evolve through the generations is a curious thing. An automobile a snapshot of the design, the technology, the safety, and the trends of the time.

That's how I look at this all-new Chevrolet Spark, a car that has changed so drastically in the last 20 years, especially since the Spark started its life not as a Chevrolet, but as a Daewoo. Yes, THAT Daewoo.

Back in the late 90''s, Daewoo (already 50% owned by General Motors since 1972) produced a car called the Matiz; I remember it well because me and my dad joked about its, uh, looks when we took our vacations abroad. The Matiz was the epitome of the econobox, much like the Kia Pride (itself based on the Mazda 121/Ford Festiva) of the same era; cheap, but not really cheerful. In other markets, the Matiz was officially marketed as the Chevrolet Spark, though some Chinese brands did market it under other names, albeit without authorization from General Motors. 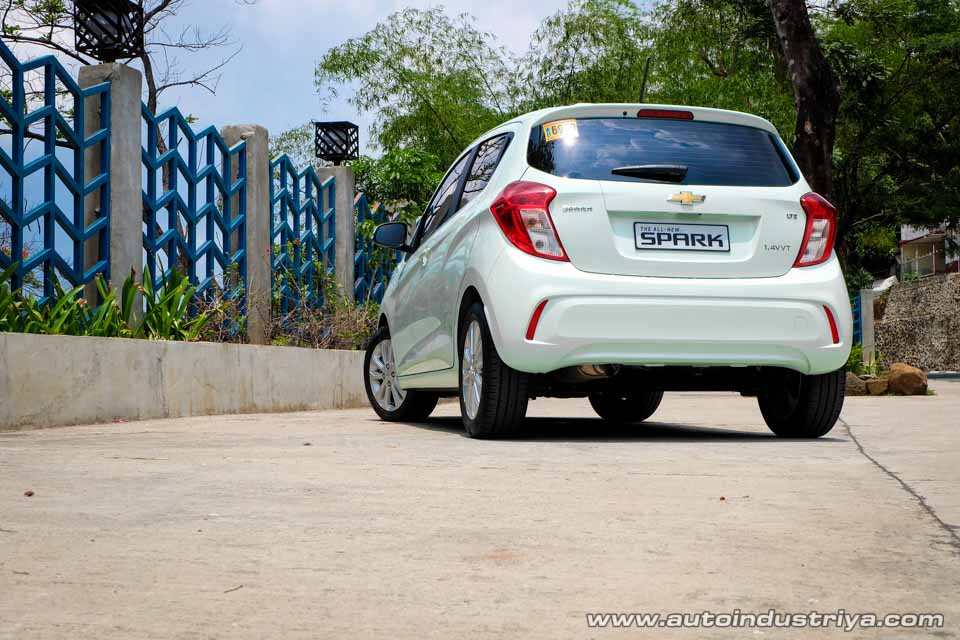 In the mid-2000's, GM launched the Chevrolet Spark, then already the second generation of the Matiz, and -if memory serves- that was the model we got in our market. That Spark wasn't particularly outstanding; it was built to be affordable, not trendsetting. The plastics really felt like plastic, the clutch pedal felt like an on/off button, and the handling and power were really made for the city, which is where it spent most of its time. But it did the job, serving as a daily driven car that's easy to park and maneuver. Like its predecessor, it too was mimicked by car companies from the Mainland, some of which were marketed here.

The third generation Spark in 2011 was when things started to really get going. That car was, by far, a revolution for the line with its renewed design, better materials, better performance, and overall packaging. It couldn't have come at a better time for the company because General Motors as a whole had to recover from bankruptcy protection just two years before. I actually enjoyed driving that car; it wasn't particularly quick, but it was fun to drive around the city, and the styling didn't imply that you had to settle for less in order to have personal mobility.

Now we come to the fourth generation of the model, and my word, does this Spark show how far Chevrolet (and Daewoo, now GM Korea) has come.

Style-wise, it's clearly a looker. The new family face, the larger lower intake, and the sophisticated headlamps outlined with LED daylight-running lamps does give it character above and beyond what an A-segment car should have. The body is less edgy than before, exuding a more moderated and more mature interpretation of the Spark's design. The back is likewise clean, and wraps up the look very nicely. They preserved the three-door impression of the previous Spark by placing the exterior door handles for the rear seat high up on windows, right next to the C-pillar. Yes, this is an econocar, but it certainly doesn't look like it. And that's a good thing.

What's particularly interesting is that Chevrolet resisted the temptation to make the Spark bigger for the sake of making it bigger. It's actually smaller in all respects compared to its predecessor, measuring in at 3635mm long (previous: 3675mm), 1595mm wide (previous: 1597mm), and 1483mm tall (previous: 1549mm). The really important change is the longer wheelbase at 2385mm (previous: 2375mm) which, together with the shorter overall length, means less overhangs for better handling and stability.

Chevrolet also seems to have had a bit of fun with the palette of colors for the Spark in the brochure. Somehow I don't think color names like Black Meet Kettle, Brimstone, and Son of a Gun Gray Metallic would have made it to the Pantone color book. Another color presents quite a bit of intrigue, as Pull Me Over Red does speak for itself. This one is called Mint My Mind, and while it isn't a rather masculine color, it does look quite interesting. The wife likes it; her favorite is teal, so close enough. 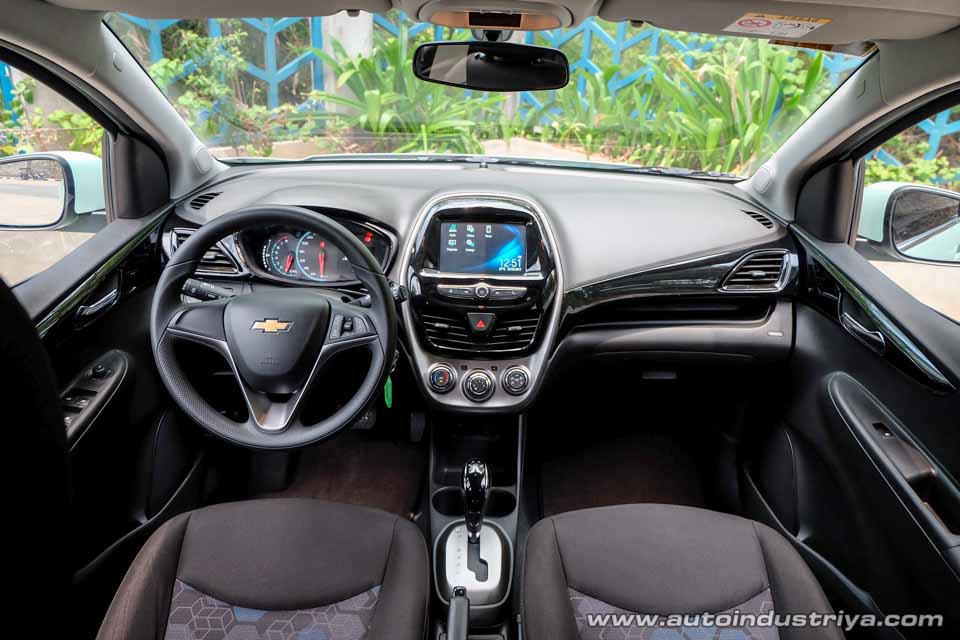 Inside, the Spark definitely leveled up its game. The dashboard is clean and crafted nicely, while a piano black accent panel takes the place of the body color-keyed trim of old; a nod to the newfound maturity of the Spark line. The door panels look and feel to be of better quality, and even has the same piano-black accents with chrome doorhandles. The materials they use appear to be of better quality; yes it's still plastic, but not plasticky. The seat material is likewise better. The overall initial impression the Spark's cabin gives is definitely more premium than before, and somehow the English word polished doesn't quite cut it, so I'll use the Spanish one: pulido. No, it's not Tagalog.

The car's primary controls are straightforward and easy to get familiarized with. The steering wheel is all new, and doesn't look like it was shortchanged for budget constraints; it even has audio and bluetooth controls. The automatic gearstick is conventional (not gate-type), and commands the CVT, not a 4-speed auto. What's interesting is the single central “pod” for the aircon and the 7-inch MyLink touchscreen multimedia system; it neatly organizes the controls for two of the most important convenience systems in the car. The new Spark has a conventional gauge cluster with a large multi-info display controlled via the lighting stalk on the left. What I do miss is the rally-style gauge pod of the previous Spark; it just has a bit more character.

The seats are comfortable, which is good for urban driving. The back has good legroom, and likewise comfortable for long drives. The boot can accommodate 195 liters of cargo; not bad for a small car with the rear seats up. What I didn't like was the way the rear seats folded down for more cargo room; they didn't really fold flat or even fold down at all. Despite trying to rearrange the seatbelt latches, the rear seats only folded to an angle of 45 degrees; not good, unless you're loading something really heavy to force it down. 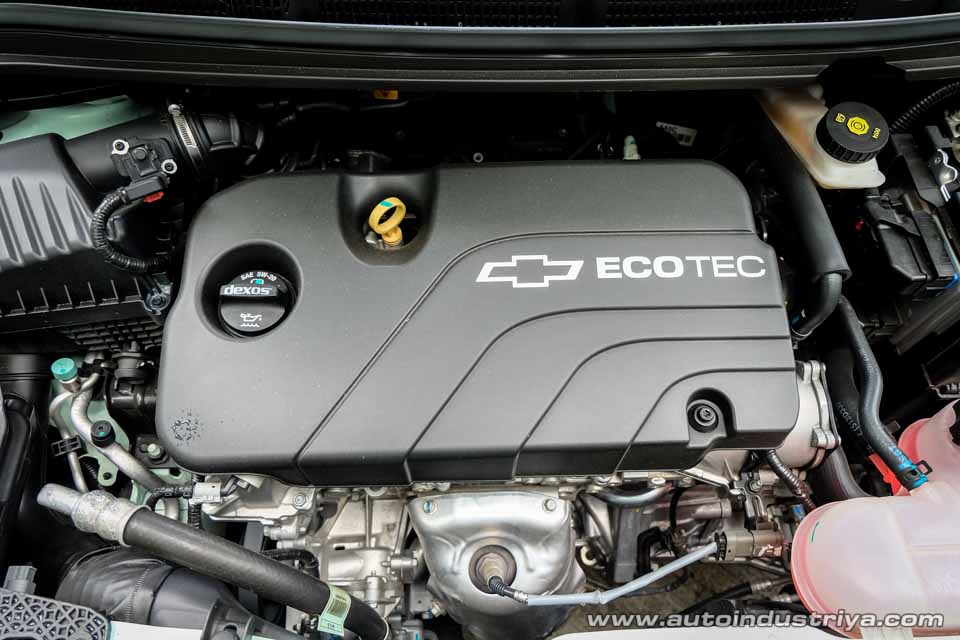 Behind that new face is a likewise new engine: a 1.4-liter twin-cam 16-valve four cylinder. The previous model had a 1.2L and a 1.0L with 81 PS and 68 PS, respectively, so this 99 PS, 128 Nm 1399cc motor is definitely an improvement. The same sentiment goes for the more sophisticated continuously variable transmission, making for a combo that should deliver better efficiency and all-around performance.

When driven daily, it's hard not to enjoy the little Spark. The car is heavier than before at 1049 kilos, but that's not a problem for the slightly larger and significantly more powerful engine; a welcome upgrade over the 1.0L and 1.2L motors we've become familiar with in this class. The powertrain, particularly the good CVT, provides improved acceleration, especially in the uphill portions. When casually driven at an average city speed of 19 km/h, fuel economy was at 9.5 km/l. If driven smartly and with less traffic at an average of 23 km/h, it improves to 10.2 km/l. On the highway, that goes up still to 14.9 km/l if you're not overtaking so much (87 km/h average speed).

The manners of the Spark have likewise improved. The ride over tarmac is very good for a short wheelbase minicar, and even on our roughly ribbed concrete it fares well. The Spark also manages the air turbulence created by trucks or buses as you pass them on the highway; normally an A-car gets a bit rattled when it encounters that. Tire noise from the Continentals on all four corners is actually better mitigated compared to a lot of slight larger, more expensive models. The electric power steering doesn't really have much feedback, but that's not important if you're using the Spark in its element like getting groceries, running errands, and taking the kids to school. 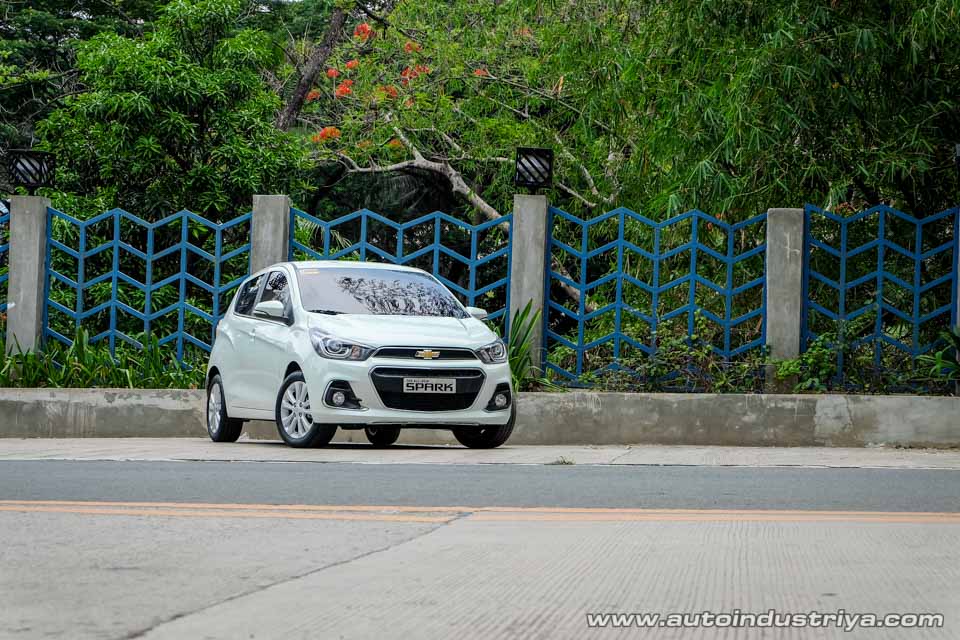 On a handling road, the Spark does manage quite well. The car is nimble, and you can have a lot of fun tossing it around corners. The suspension has a good balance about it, and is far better than the bounciness of the previous generaiton. The brakes are good, but they're not really made for performance driving. One surprise came in the form of safety; sure, there are the usual dual airbags, anti-lock brakes and such, but this Spark LTZ (and the midrange CVT version) does have traction control. Having that important safety feature makes the Spark one of the most affordable carfs (if not the most affordable car) to have traction cotnrol in the market.

As a package the Spark certainly has leveled up its game, that much is clear, and shows how far Chevrolet's econo car has come in its two decade history. The price has increased significantly though, but at PhP 763,888 it's still justifiable given what it's coming with. The design, the high grade materials, the overall build quality, the great features, and the good powertrain combination are the essential elements of a great, all-around car for the city, and outside of it.

We get the keys to a 2017 Isuzu D-Max LS to see how it fares as a mixed-use workhorse.