My friends thought I was crazy idea to drive, of all things, a Suzuki Super Carry.

With cars getting more advanced by the minute, why would testing this basic mini truck be a good thing? Simple: It's all about relevance. These cars serve as the backbone of many businesses, big or small, and communities across the nation. In reality, it makes a lot of sense to check out this mini hauler. 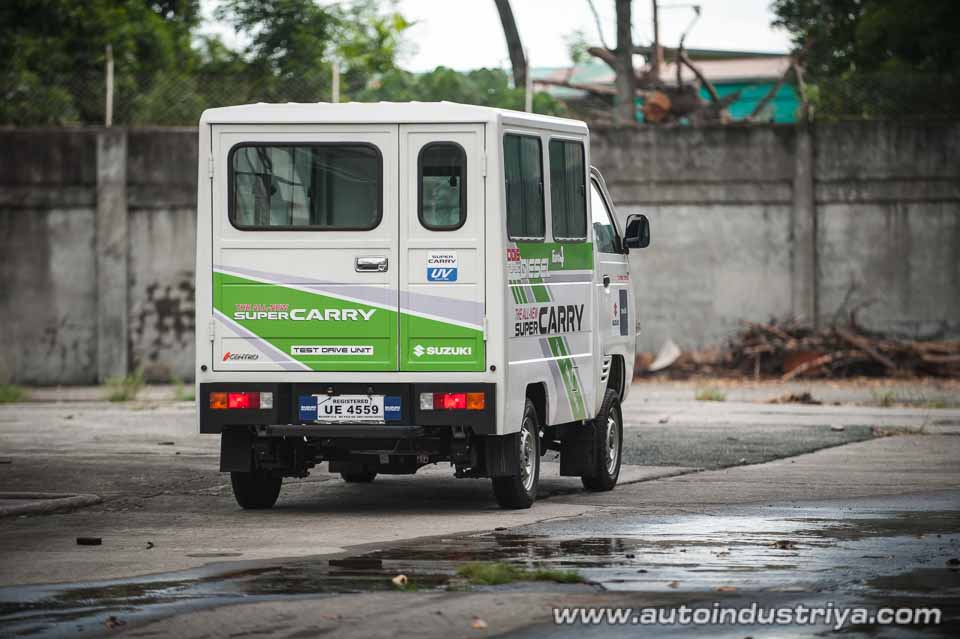 The Super Carry you see here is what's called the UV variant. It claims to seat twelve and, with a new turbodiesel engine, promises to deliver impressive fuel economy, a plus for business owners. This is going to be an interesting test.

Looking at it, it seems like a tough ask to fit twelve people within the confines of the Super Carry. At a mere 3.7 meters long, the Super Carry isn't just small, it's diminutive. It makes no apologies for what it looks like and, for its intended purpose, it's alright. To be honest, there really isn't any other way you can 'style' a vehicle like this. Think of this then as a miniature L300. Still, it looks a lot more modern than the old Super Carry. 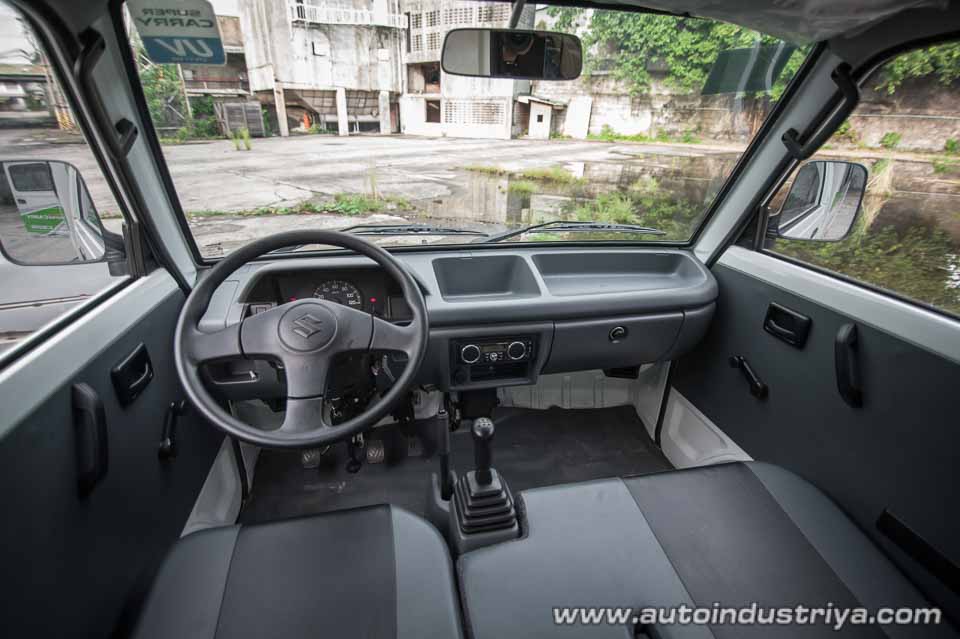 Inside, it's as basic as you expect from a vehicle like this. Wind-down windows, plastic steering wheel, vinyl trim and bare metal is what you see from the driver's point of view. There is no air-conditioning, no power steering but you do get a rather novel radio which integrates two speakers in the head unit. Yes, it does come with auxiliary input and even a USB port. Again, this UV is all about, well, utility so the interior can be easily hosed out for cleaning.

At the rear meanwhile are two rows of flip-up benches, accompanied by a pair of grab rails. The side windows slide open and the bottom cushions are just the right size. Headroom meanwhile is a bit of a premium for taller passengers but those below six feet will be just fine. Then again, if they made the rear box any taller, the Super Carry might end up with rather questionable stability. As for accommodations, you can fit twelve in the Super Carry for as long as it's a mix of adults and children. Ten passengers is a safe bet if all your passengers are adults. If you won't be using the seats, you get about five cubic meters worth of cargo space inside, not bad considering its size. 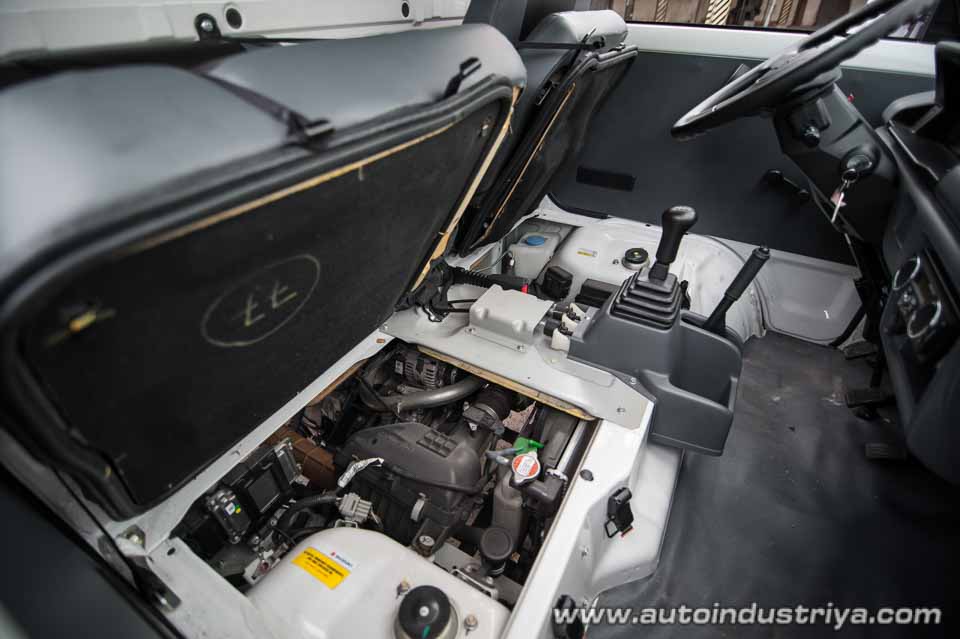 Powering this mini truck is perhaps the smallest turbodiesel sold in the country today. It is a 0.8-liter, two-cylinder, eight-valve engine that musters 32 PS and 75 Nm of torque. It then shifts through a five-speed manual transmission. For comparison basis, the old Super Carry with a gas engine put out 44 PS and 74 Nm of torque. One may be skeptical about the lower horsepower rating but there's only one way to find out: take it out for a drive.

Driving the Super Carry is a straightforward affair. The clutch is soft and has a very low biting point to a point that you don't have to step on the gas to move along. This makes it easy to drive and easy to learn. Despite the lack of power steering, it didn't feel heavy or tasking when doing tight maneuvers, thanks in part to those narrow wheels. Speaking of tight maneuvers, it comes as no surprise that the Super Carry has an impressive turning radius. It's not difficult to drive at all but the lack of air-conditioning will take its toll on anyone driving in extreme heat.

With just 32 PS on board, the Super Carry is definitely no rocket ship but it's actually not bad. The first gear is short to make quick work of moving forward while carrying relatively heavy loads. Once you've gained enough momentum, you'll find yourself using second and third gear pretty often as fourth and fifth feel like overdrive gears.

Performance is adequate when unladen but you will notice that you're nearly pinning the accelerator to the floor when there is load at the back or when it's uphill. However, having tried an older, gas powered model, it's much more manageable when taking on tough city streets. You don't have to downshift that often given how flexible second and third gear are. Do remember that this car is geared towards utility and economy. 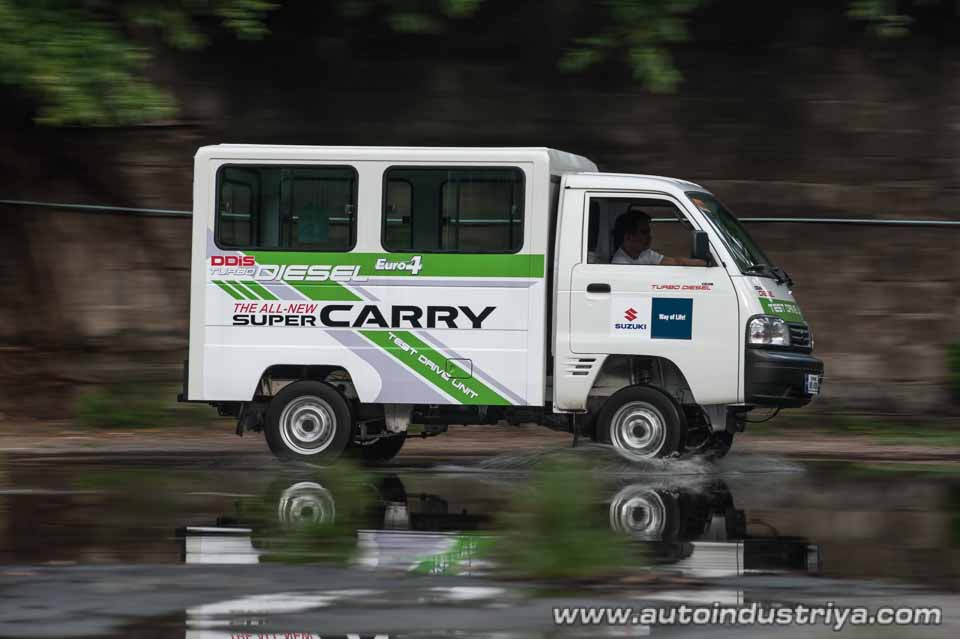 As expected, the ride is stiff when unladen but improves slightly when carrying more weight. Don't expect pickup-like levels of ride compliance. This is a vehicle that prioritizes payload and durability over comfort. If you're seated alone at the back, sit near the middle section as you will feel less of the bumps on the road.

Judging the Super Carry UV as a car is going to be unfair on its part as it wasn't built to be a passenger car. But if you see it as a low-cost delivery van or an inner-city business shuttle, it actually does the job well. Speaking of low costs, it's quite a fuel sipper too. After over 200 kilometers of heavy city traffic, the Super Carry's fuel gauge still displayed a little under half from its thirty liter tank. That works out at about 12 to 13 kilometers per liter while carrying goods and people, as well as long idle times during the photo shoot.

At Php 565,000, the Super Carry UV won't be leaving a big dent to small business owners and for those looking for a fleet of delivery vehicles. Yes, it's basic but judging by the amounts of old Super Carrys all over the country, you can be assured that these little vans are built for the long haul for more years to come. Plus, with the new diesel engine, Suzuki's mini UV might have expanded its appeal.