The all-new Toyota Hiace has just come out, making its world debut here in the Philippines. While the word 'revolutionary' isn't exactly a common description for a redesigned van, the all-new Hiace presents a big and significant change over the current model.

It's worthy to note that the Philippines is the largest export market for the Hiace outside of Japan, showing the affinity that Filipinos have for Toyota's big van. That's why Toyota wanted to write a bit of history and stage the world premiere in the Philippines; a first for the auto industry that usually sees mostly local launches and occasionally, regional launches.The specs are impressive, and thanks to Toyota's new thrust for safety, all variants of the Hiace are now better than ever.

But just how big of a leap did the all-new Hiace take? Here are 10 things you need to know about Toyota's biggest version of the Hiace yet.

1. Pop the hood: engine up front

The biggest change in the all-new Hiace is the engine location as it has been relocated to the front. Yes, there was the Granvia back in the 90's but this is completely different as the entire range has its engine up front and not just a single variant.

So why did Toyota do this? It's likely because of more stringent crash tests worldwide and the classic flat nose design simply wasn't going to cut it anymore. Rather than having your knees as the crumple zone, there's now a hood to soften the blow.

For 2019, the Hiace lineup has been given a bit of an overhaul. It has been simplified to three variants, rather than four. The range now consists of the Commuter Deluxe, the GL Grandia, and the GL Grandia Tourer. The roles are the same as before with the Commuter Deluxe serving as the entry-level variant, the GL being mid-range, and the Tourer aimed towards the VIP shuttle crowd.

Unlike before, the Commuter Deluxe and GL Grandia now have the same body while the GL Grandia Tourer gets a longer wheelbase and a much taller roof. That means the body options for the Hiace have been simplified to just two between two: big, and even bigger.

Toyota Motor Philippines will still offer the fifth generation Hiace Commuter and the Super Grandia; they will be sold alongside the three new variants of the new sixth generation model.

3. The Hiace is a lot bigger

Speaking of size, there's no other way of saying it: The all-new Hiace is massive.

To put things into perspective, the Commuter Deluxe is nearly two feet longer than the old van. It's also almost a foot wider than before too. The 2019 GL Grandia on the other hand is more than a foot longer than its predecessor while the GL Grandia Tourer, measures in at almost six meters long.

As for width, the two new GL Grandias are wider than the current Super Grandia and LXV by a substantial margin. Height on the other hand varies with the Commuter Deluxe being slightly taller than the previous generation, the new GL Grandia not being quite as tall as the old one and the GL Grandia Tourer being half a foot taller than the LXV. Those vertical clearance signs at your local mall will definitely come in handy to avoid scraping the roof.

It seems that Toyota is taking a more European approach when it comes to the Hiace engine range. Rather than splitting it into two, all Hiace vans (from Commuter Deluxe to GL Grandia Tourer) are powered by a single engine. And just like the Europeans, there are three different tunes for the single mill, depending on the variant.

Gone are the 2.5-liter and 3.0-liter which served Toyota since 2004, and replacing both of them is the 2.8-liter turbodiesel 1GD-FTV from the Innova, Hilux, and Fortuner. In the Commuter Deluxe it makes 176 PS and 420 Nm of torque, figures that wouldn't look out of place in a mid-size SUV. If you want more shove, the GL Grandia has a bit more torque at 450 Nm but retains the same horsepower as the Commuter Deluxe.

Curiously, the much larger (and presumably heavier) Tourer makes the least power at 163 PS and 420 Nm of torque. Toyota's engineers say that the power outputs are based on passenger capacity. Still, at least it's a lot more than the Hiace LXV.

We always reckoned that an extra gear (or two) would not only make these vans quieter on the highway, it will make them more efficient too. Toyota has responded to that by giving the new Hiace a six-speed manual and a six-speed automatic. It's a significant change too as the current one had to make do with a five-speed manual or four-speed automatic.

With that, the new transmissions and engine should do wonders for the all-new Hiace's refinement and economy.

Three variants, three seating configurations, the all-new Toyota Hiace sticks to the classic formula of offering a wide variety of seat arrangements to suit various needs. The one with the most seats is the Commuter Deluxe with 15. That's for three in front, and four for the remaining three rows.

The GL Grandia Tourer meanwhile has a capacity for 14 as it has an extra row to make up for removal of the center front seat and one seat in the second row.

But if you're not carrying that many people all the time, there's the GL Grandia with seats for 12. That's for two in front, three for the second and third row, and four for the fourth. Mind you the GL and Tourer have individual recline for most passengers as only the rearmost bench get fixed backrests.

7. All variants have ABS and dual airbags, Commuter Deluxe gets a third

By the looks of it, the all-new Hiace is out to lead in safety standards. We've always believed that having ABS should be standard for modern cars, and thankfully all variants of the Hiace, including the Commuter Deluxe, comes with ABS.

While it doesn't have curtain airbags, the Hiace Grandia versions comes with at least two front airbags, but the Commuter Deluxe with its three abreast seating in front comes with a rather novel center airbag. Yes, even the person in the middle gets cushioned from an impact should an accident happen. Nice to know Toyota thought of the person sitting there.

Lately, Toyota has been boosting their safety credentials. Just look at the Vios, Rush and Camry for instance. Not only does these cars have five star safety ratings in ASEAN NCAP, they are also equipped with stability control. The all-new Hiace GL Grandia is no exception, and Toyota designed the vehicles to meet the high standards of crash-tests held by independent organizations around the world.

Yes, this utilitarian comes with this advanced safety feature you'd normally associate with a premium and upmarket vehicle. It's not just for show either as the Hiace continues Toyota's commitment to making their vehicles that bit more safer.

And here's another feature we though we'd never see on a Hiace: cruise control. While it sounds like something more appropriate for a Camry, it sort of makes sense in a long haul van. Granted, you won't use it much around the city but it should lessen driver fatigue out on the highway.

Back then, most of us would have been completely content with two cupholders. Nowadays however, two just isn't enough anymore. We even want bottle holders on our doors for good measure and the more, the better. Fortunately, the all-new Hiace satisfies the drinks holder count by quite a lot.

Go for the Tourer and you get not one, not two, but 24 cup and bottle holders in it.

That's five in front, and ten on on the left hand side and nine on the right hand side of the Hiace. With all that, thirsty is probably the last thing you'll feel in one. In the standard GL, there's 20 drink holders strewn from front to back. As for the Commuter Deluxe, you don't get any beverage holders at the back but at least you get five in front. 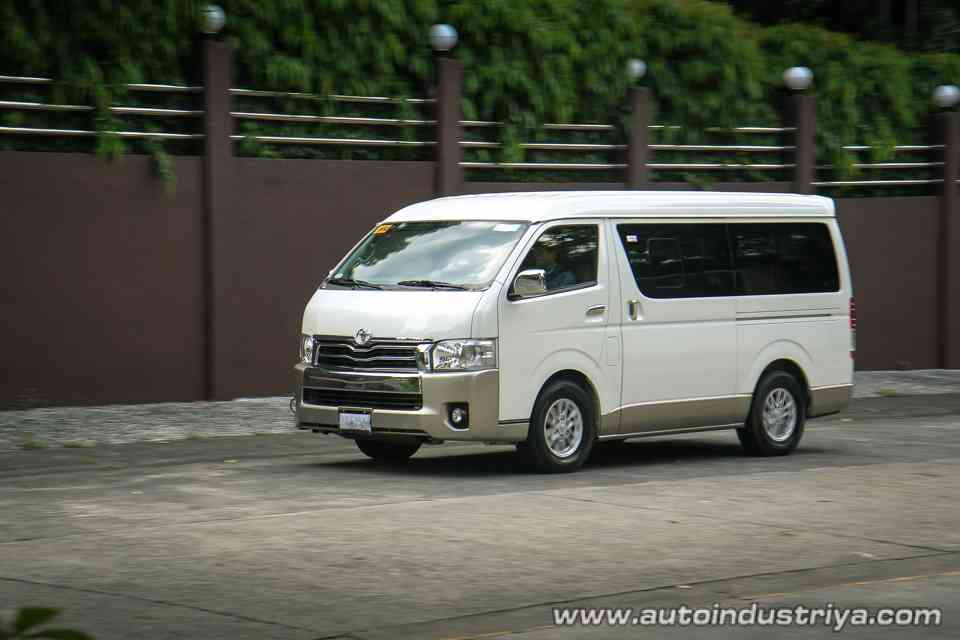 The Tourer doesn't exactly take the place of the Super Grandia either as it has fixed benches with reclining backrests, similar to the Nissan Urvan Premium. It's that configuration that helps the extended Hiace get seating for 14. So will there be a plush, 11-seat version in the pipeline for the new generation Hiace? Toyota won't say anything right now. But given that Super Grandias are quite popular here, we won't be surprised if we see an all-new Hiace Super Grandia for the Philippine market in the future.

If you like cars, you can get some neat books at the Big Bad Wolf sale

Spec Check: All generations of the Toyota RAV4

All-new Chevrolet Trailblazer to be available in two variants, LT and Premier

Could Lexus offer the LX Offroad outside of Japan in the future?

Isuzu wants to lead the PPV class, but can they do so with the mu-X LS-E 4x4 that costs 2.45 million?

LTO extends validity of vehicles with plates ending in 0

Don't wait until the last minute to renew your vehicle registration

After debuting in Thailand, the Hilux GR Sport appears to be ready for its Philippine debut

All-new Toyota Rumion is an Ertiga in disguise

Suzuki Ertiga transforms into the Toyota Rumion for South Africa