In spite of what President Donald Trump believes, much of the world is already quite aware of climate change and the large contribution our motor vehicles add to it. In response, many of the world’s auto manufacturers are slowly making the shift towards cleaners sources of power. Some manufacturers have already started developing more Electric Vehicles (EV). Others have opted to improve and develop low displacement turbocharged engines for better power, fuel efficiency, and emissions. For us regular consumers, it may seem like the future of the internal combustion engine (ICE) is soon coming to a close. Yet if Mazda is to be believed, there might still be hope for our favorite source of propulsion.

Just last month, Mazda announced its latest engine innovation called SkyActiv-X — a new kind of engine designed to complement its current range, and hoped to prolong the life of ICEs. The innovation should come as no surprise, as Mazda has historically experimented with alternative sources of power like its famous line of rotary engines. 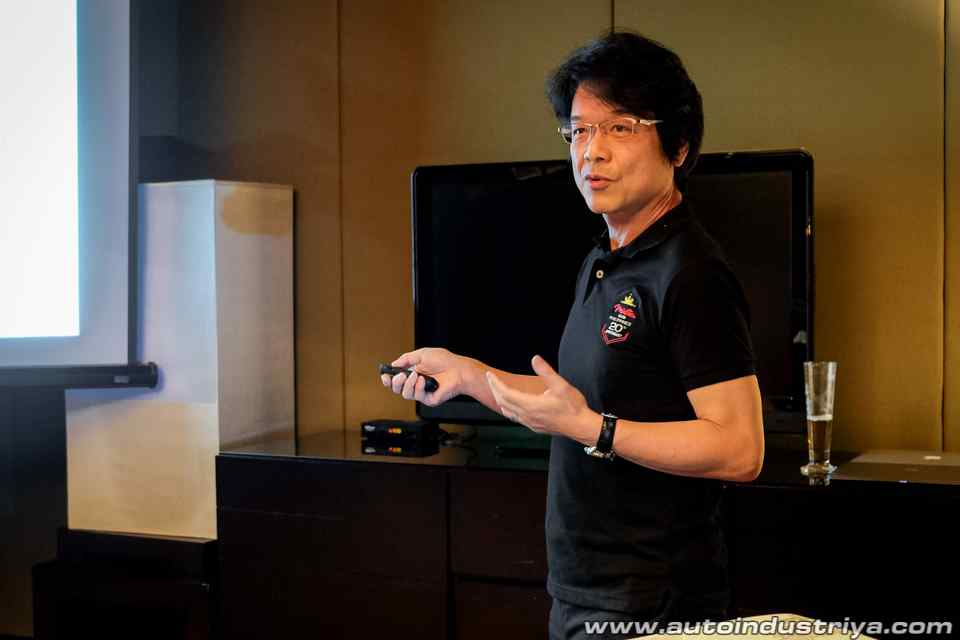 To better explain what SkyActiv-X is and how it works, Mazda Philippines invited a select group of members of the media to presentation by Hidetoshi Kudo, Mazda’s Executive Officer for R&D Administration and Product Strategy.

The SkyActiv-X, is named so to symbolize a ‘cross’ over between the best traits of their SkyActiv-G (gasoline) engines and their Skyactiv-D (diesel) engines. The new Skyactiv-X engines were conceived to provide the responsiveness and fuel efficiency of diesel engines, while maintaining the cleaner emissions and high horsepower of gasoline engines.

To understand how SkyActiv-X works, we first have to review how gasoline and diesel engines work. For reference, diesel engines use compression to generate combustion. Diesel fuel can’t be ignited by a spark, but will combust at a certain pressure. This is why diesel engines don’t have spark plugs, but rather pressurize the air-fuel mixture in the cylinder to a point where it combusts on its own.

By contrast, gasoline engines use spark ignition to generate combustion. Gasoline is highly flammable, so the air fuel mixture in the cylinder is lit by a spark to produce power. Thanks to the spark, combustion can be triggered at a lower pressure than most diesel engines. But gasoline is also susceptible to combusting from pressure. This is why it’s important to use the right RON \ octane rating fuel for your engine to prevent premature combustion from compression. 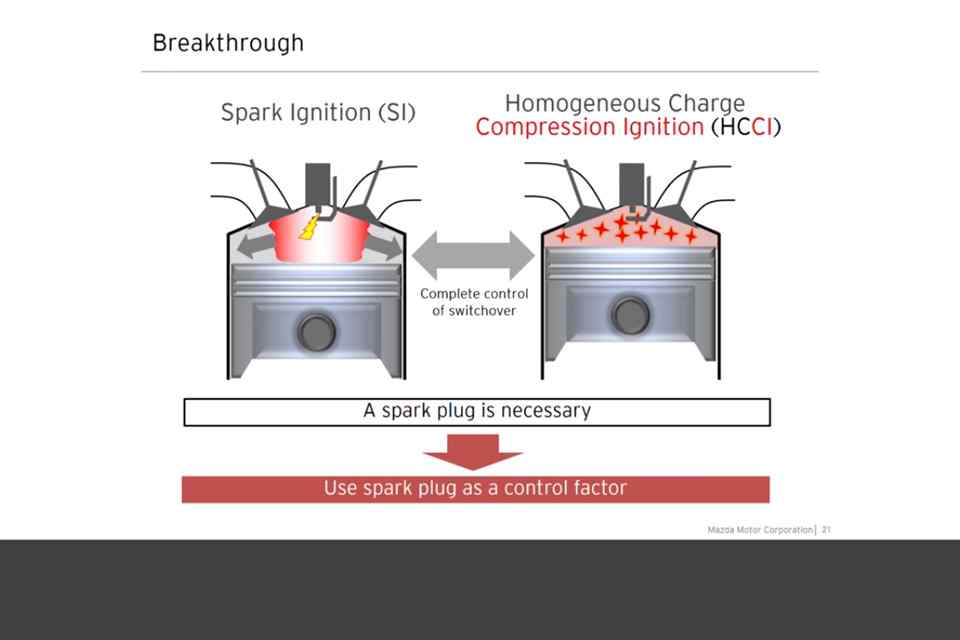 With these two differences in mind, the SkyActiv-X engine is a gasoline engine designed to combust fuel by compression, like diesel. Compression ignition with gasoline is relatively easy to achieve provided there’s not much load on the engine and factors like the temperature, air-fuel mixture, and pressure in the cylinder are tightly controlled. In fact, many engineers have already been studying the feasibility of these kinds of engines, calling them, Homogeneous Charge Compression Ignition (HCCI) engines. Like a typical gasoline engine, HCCI injects fuel during the intake stroke (typical diesels do it during the compression stroke), and raises density and temperature by compression until the entire mix reacts spontaneously. Unfortunately, this system requires a very high compression ratio (36.8:1), necessitating heavy, sturdy engine blocks.

Moreover, it becomes harder to achieve consistently at higher loads like when accelerating, or during a change in weather conditions, affecting the temperature and pressure inside the cylinder. 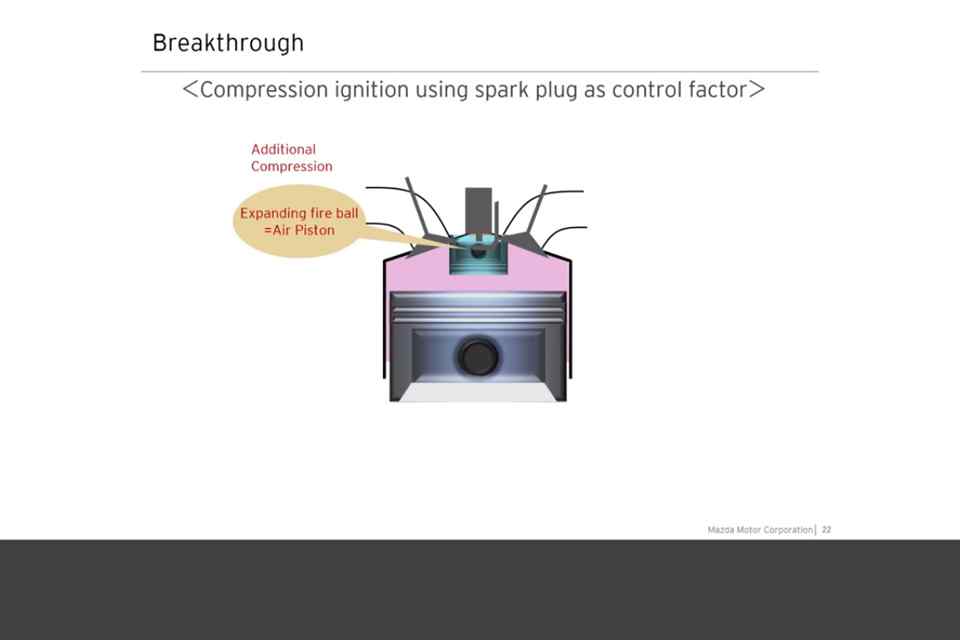 It’s at these higher load requirements where Mazda has made a breakthrough. Though compression is the primary method whereby a SkyActiv-X engine achieves combustion, it still retains the spark plug to help maintain that critical temperature and pressure. 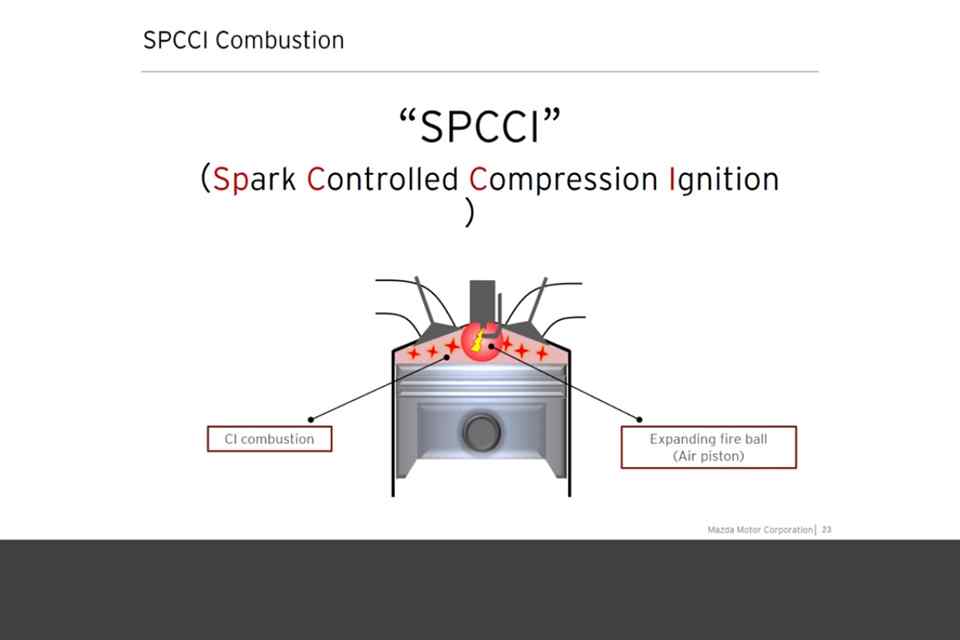 Rather than using the spark plug to ignite the air-fuel mixture at the peak of the stroke, the spark plug ignites the air-fuel mixture during the upstroke. This creates an expanding flame that increases the pressure in the cylinder, which in turn increases the temperature and pressure that allows the mixture to combust at the intended temperature and pressure. As a result, the spark plug now controls the timing of the compression ignition, which Mazda aptly calls Spark Controlled Compression Ignition (SPCCI).

This new combustion technology allows Mazda to use leaner air-fuel mixtures and combust at comparatively lower compression ratios of 18.0:1, compared to conventional HCCI engines. According to Mazda’s own tests, this kind of combustion results in 20-30-percent more fuel efficiency than a comparable SkyActiv-G gasoline engine. It provides more responsive acceleration over a wider engine RPM range. This leaner burn also reduces harmful emissions. The final benefit is that, because it relies on compression, rather than ignition, the fuel requirements are rather low. Mazda claims SkyActiv-X engines will run on regular 95 octane gasoline. One would think that such a high-tech engine would need to be built from scratch, yet Mazda claims it can adapt its current SkyActiv-G engines, with its current components, to become SkyActiv-X engines. 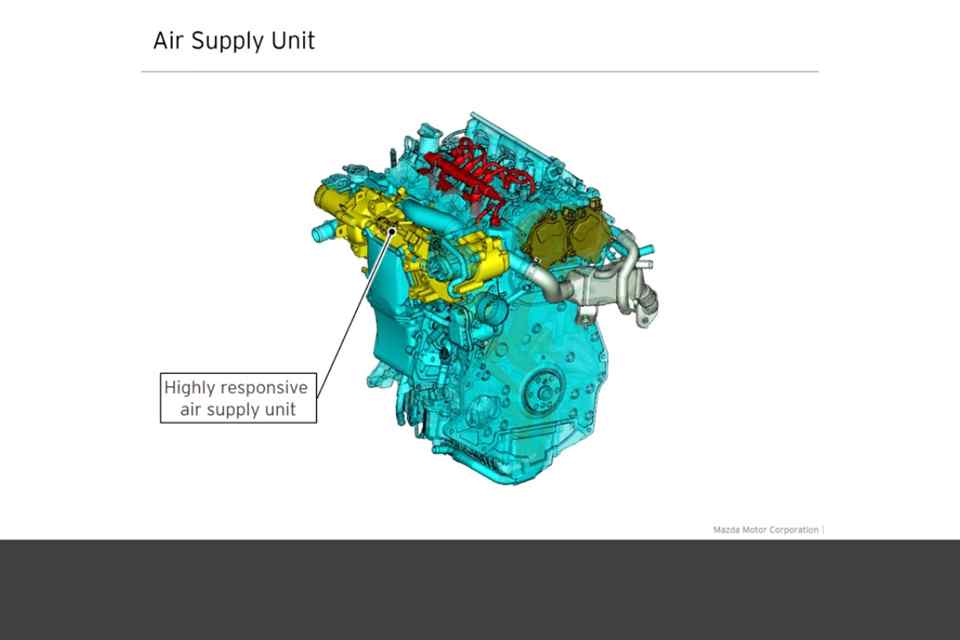 The future of SkyActiv

Naturally, the technology is still in the testing phase, but because very little modification is required, we could see it in production cars very soon. It could quite possibly debut as early as 2019. Our spies have already caught the first Mazda3 SkyActiv-X testing. In just a couple of years, we could see the SkyActiv-X offered alongside the Skyactiv-G and Skyactiv-D engines in a wide variety of models. Naturally, the Skyactiv-X will be the slightly more expensive, third option to the rest of the SkyActiv engine family.

Of course, this doesn’t mean that Electric Vehicles are off the docket for Mazda. Mazda plans on using its partnership with Toyota to develop its own EV solutions as a part of their long-term vision.

Mazda has no definite answer as to when we’ll be seeing SkyActiv-X in the metal, or even which of their cars will get to use it first, but stay tuned for updates from the upcoming Tokyo Motor Show this October.

Tracing the roots: The rise of the crossover