You see these cars everyday; they usually have diesel engines, tough looking exteriors, and seven seats. It's impossible not to see one on the road or even in your neighborhood. You probably even own one too. Say SUV and chances are you will be talking about the Pickup Platform Vehicle (PPV).

Of course, SUVs have been around for more than half a century, although the term wasn't coined until the mid-80's. The formula is simple: take a pickup, put a metal or fiberglass roof where the bed lies, seam the two together and call it a day. The Americans have been doing so since the days of the Chevrolet Blazer, Dodge Ramcharger and Ford Bronco. The Dodge aside, the Blazer and the Bronco eventually became the Tahoe and the Expedition. 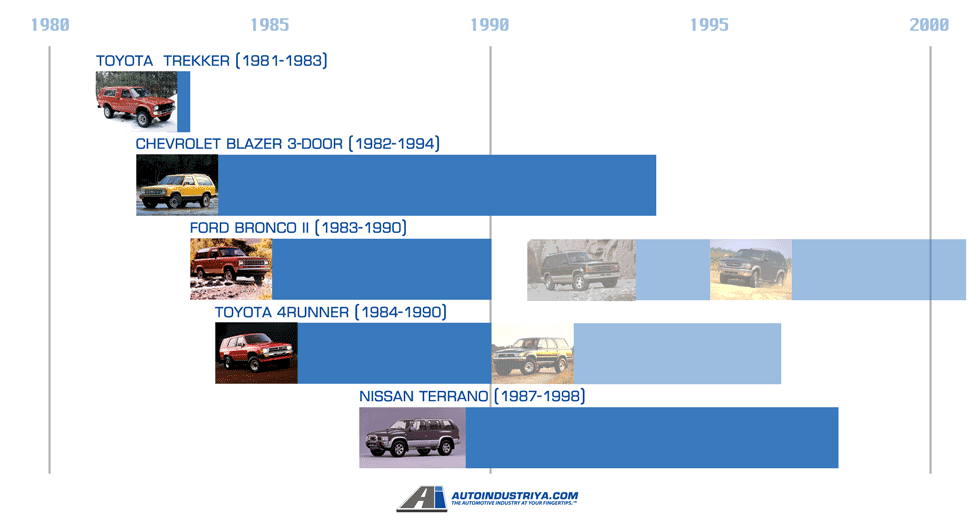 Meanwhile in Asia, Oceania and Latin America, most had to make do with pickup trucks with campershells, making the vehicle look less, well, truckish. The mid-size PPV's origin story starts with Toyota and Winnebago in the early 80's. Initially called a “walk-through conversion” (so one can walk from the cab through to the bed), Winnebago, with Toyota's blessing, took a handful of Toyota Pickups (US-spec Hilux) and the result was the Toyota Trekker. Based on the short-box chassis of the Pickup, the conversion consisted of a fiberglass tub, bed sides, a non-removable canopy and rear hatch. The rear section was fully upholstered and even came with rear seats that fold flat for extra cargo space. Sold from 1981 to 1983, it was essentially a testbed for Toyota's upcoming SUV at the time. Although less than 2,000 were built, it was enough to convince Toyota to create their own SUV. It eventually paved the way for the 4Runner, which was launched in 1984.

Chevrolet had replaced their Isuzu-based LUV pickup for the bigger S-10 in 1982. A year later, they launched the S-10 Blazer, which was met with good reception. Over at Ford, they created made the Bronco II, in response to the fuel crisis and the S-10 Blazer. 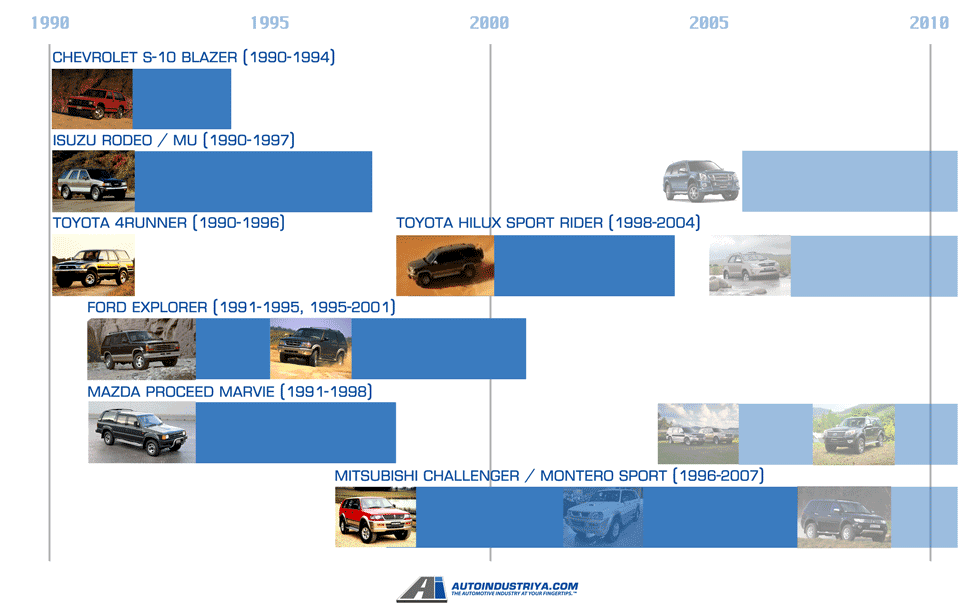 By the 90's, manufacturers saw the potential of the mid-size SUV segment. The Isuzu Rodeo (based on the Isuzu pickup) and Nissan Terrano (based on the Nissan Eagle pickup) were among the first to offer five doors, broadening its market appeal. Ford and Chevrolet followed suit a few months after with the Explorer and the 5-door S-10 Blazer. By this time, Toyota had debuted the second generation 4Runner and would be the last time its SUV would be based on the Hilux, as the succeeding models were based on the Prado.

The Ford and Mazda twins were first to adapt to the common layout of modern PPVs in Asia. In 1991, Mazda and Ford based their Asian SUVs on the crew cab (4-door) versions of their pickups, namely the B-Series and Asian- and Europe-spec Ranger. Mazda made the Proceed Marvie with the familiar formula of seats for seven, fold flat third row seats and a decently-appointed interior. A Ford version was made specifically for Australia and New Zealand markets called the Raider. Toyota would follow suit in 1998 with the Hilux Sport Rider which was similar in concept to the 4Runner but made specifically for developing nations and select Asian markets.

The Philippines would finally experience its first PPV in late 1995 with the launch of the Terrano. Even though it lacked third row seats, it could be said that the Terrano was a preview of things to come. Mitsubishi also considered bringing in the first generation Montero Sport in the Philippines in the late 90's but only officially launched it in late 2004. While that model only had seating for five, in Thailand, the Mitsubishi introduced a Strada G-Wagon that had seating for 7 from 2002 to 2006. 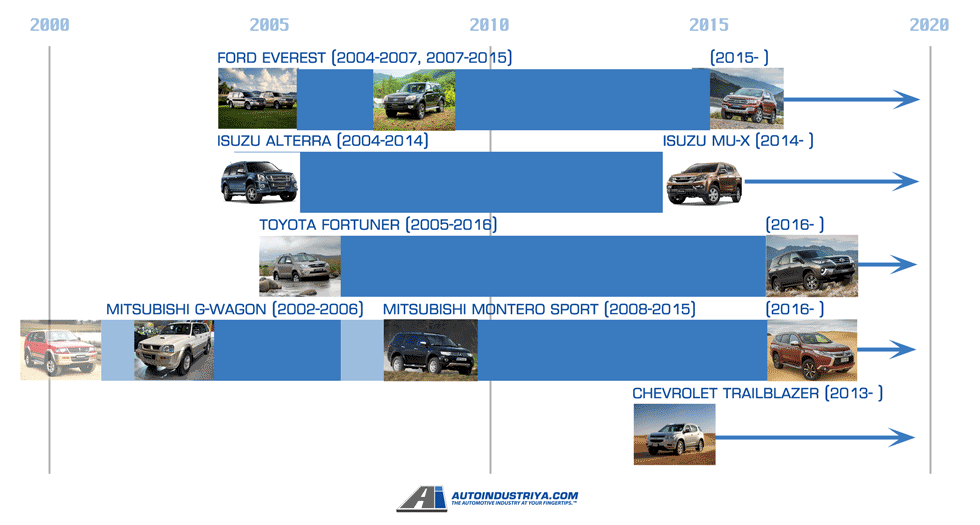 Also in 2004, the Philippine market got its first seven seat, mid-sized pickup-based SUV in the form of the Ford Everest. Designed specifically for emerging markets, the first-generation Everest was also based on the Mazda B-Series pickup.

Seeing the success of the Everest, other manufacturers started seeing potential in making SUVs specifically for emerging markets. Isuzu came out with the D-Max-derived Alterra, also known as the mu-7 in other markets. Toyota decided to take it a step further by developing a platform for three vehicles with the IMV line, which underpins the Innova, Hilux and Fortuner. With the Fortuner, Toyota differentiated it from the Hilux it was derived from by giving it unique styling and body panels. In 2008, Mitsubishi finally gave the Montero Sport an extra row of seats, making it more competitive in the segment.

By this time, the mid-size SUV had evolved far beyond being just pickups with campershells. They featured well-appointed interiors, modern creature comforts and executive sedan levels of equipment. What started out as a side project from Winnebago gave birth to the most competitive SUV segment in Asia.

These days, we now have a crowded and fiercely competitive segment, with the Chevrolet Trailblazer, the third generation Ford Everest, the Isuzu Mu-X, the third generation Mitsubishi Montero Sport and second generation Toyota Fortuner fighting for buyers' garage space. While the pickup roots still remain, the new generation of PPVs feature performance, comfort and equipment levels creeping even higher upmarket, all while retaining the off-road capability of their origins. Now that the second wave of PPVs are ready to take on the road, there's no doubt this segment is here to stay, and getting better with each generation.

We take the 2016 Toyota Fortuner for a quick spin around Clark.

An afternoon with Aston Martin

We drive Aston Martin's V8 Vantage N430, V12 Vantage and Rapide in the city and out of town.