With the promise of bringing in top-tier international drivers to battle with our pool of local drifting talents, Judgement Day 2016 was one event that was surely marked on many enthusiasts’ calendars. Fans and spectators aside though, this event was especially important to our local drifting community as it will give them the opportunity to see how their vehicles, teams, and techniques stack against world-renowned professionals.

Since drifting is still somewhat in its infancy in our country, the Judgement Day event is a monumental step forward in terms of driver development. To our knowledge, it is the first event in the sport’s local history that allowed local talents to learn from international drivers first-hand in a competition setting. That said, going into the event you would think that everyone who participated went into the fray just to be schooled and beaten by the foreign talent – and you’d be dead wrong. 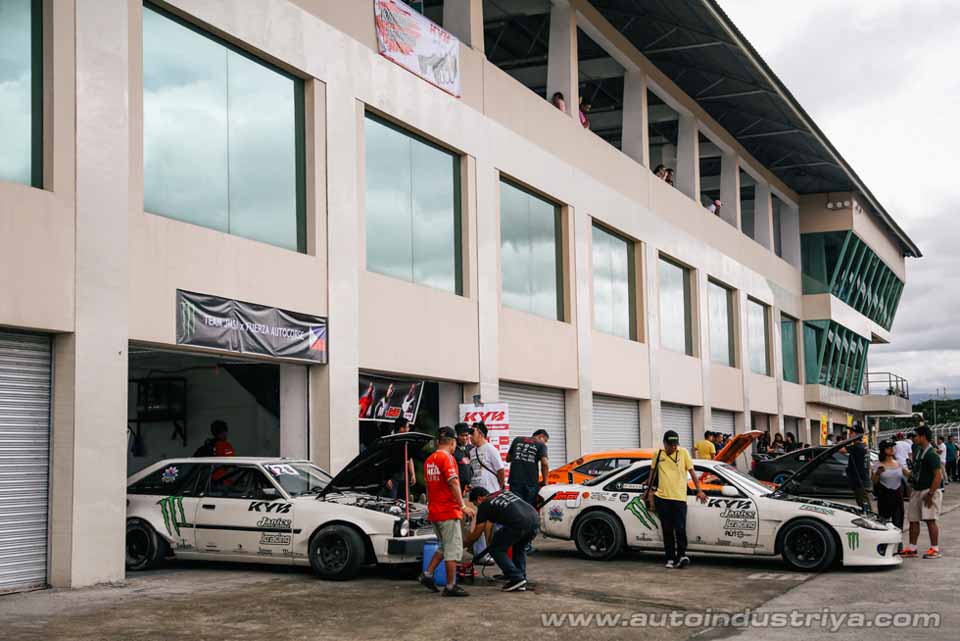 Despite the gaps in horsepower and the display of skill during practice the day before, it seemed like the whole paddock was unfazed by the guest pros as they were buzzing away early Saturday morning. All the local teams were busy working on their cars or discussing strategy. Perhaps in a way this was the only proper thing to do to welcome our guests from abroad – prepare as best they can, and go for the win.

Granted that the sport of drifting is inherently a display of showmanship, deciding on a winner – while certain criteria will be provided – will need to be ultimately called on by a panel of judges. For this event, a trio of foreign judges, namely Mike Procureur, Steve ‘Stiggy’ Evans, and Zai Hamdan, make the final call on who gets the win during tandem rounds. These judges have backgrounds in various drifting events around the globe, and considering that our locals are strangers to them as well there will be no bias in calling the victors as well. 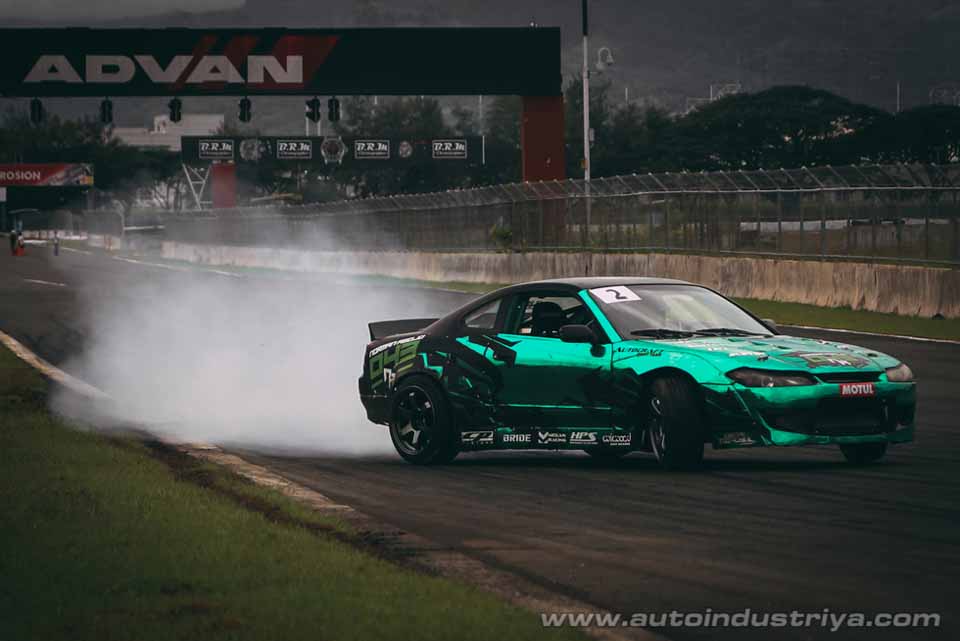 Practice runs on the day itself were a bit tricky for all participants. With the mild showers drenching the course earlier that day, the drifters needed to adjust their lines, entry speeds, and initiation according to the slippery surface. A good number of the guys found it difficult to put the power down during their runs thanks to the drastic drop in traction from the wet pavement; yielding speeds far below what was expected of them during the actual runs.

By the time the drivers needed to do qualifying runs though, the surface was dry enough to allow tires to become smoke once again. Prior to the ‘tandem’ runs that drifting has long since been judged by, drivers have to do solo qualifying runs so that judges can dictate how well the drivers can follow the specified lines and angles throughout the course. Given that making it to the top 32 in qualifying will ensure a spot in tandem runs, everyone was already going all out during their solo runs. 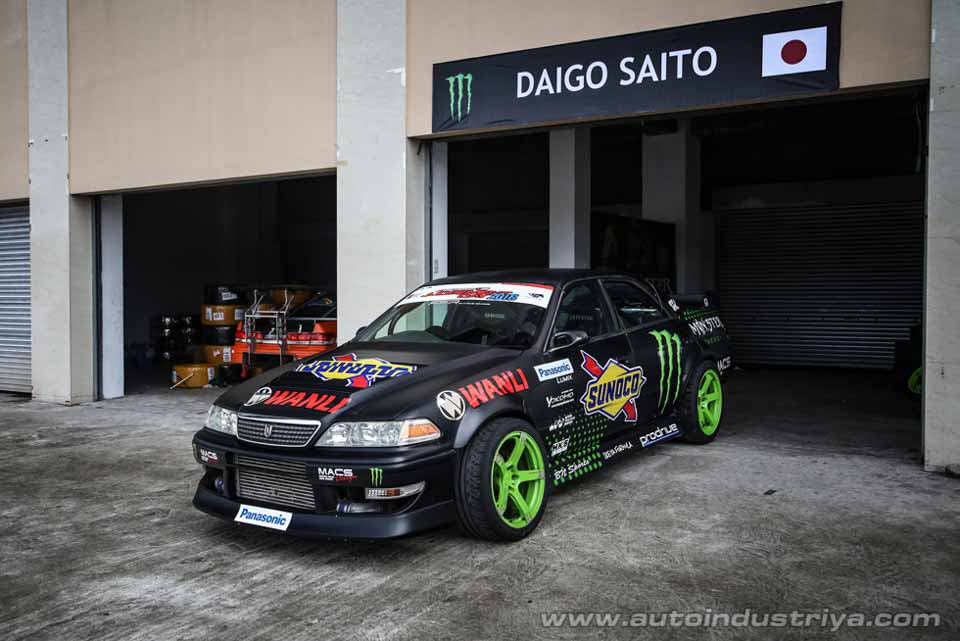 Perhaps the most anticipated driver among the foreign guests is none other than Daigo Saito. Saito, whose accolades span from championship wins in D1GP in Japan to Formula D in the United States, is an accomplished drifter in his own right. There was no question that he was the man to beat during the day. Following his run during qualifying however, it seems everyone understood how difficult (read: impossible) that task ought to be.

Apart from Saito, a host of foreign drifters also made their way to the event to showcase their art. Led by Filipino-Japanese drifter Toni Arakaki, Japanese drifters Hirohide Tanaka and Kaiitirou Kadekaru made their way from the land of the rising sun with vehicles and equipment in tow. Tan Tat Wei from Malaysia also ran, while Nasser Almutairi joined the fray from the Middle East. Rounding up the contigent of foreign drifters is Archie Marshall from the United Kingdom. 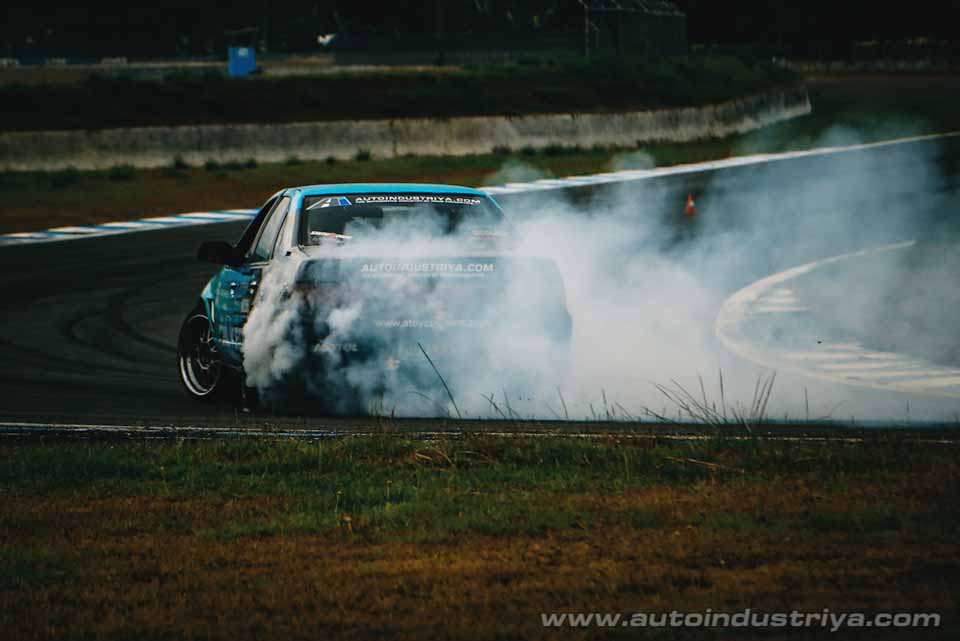 Not to be outdone by the guests, the resident drifters took to the course with as much energy. A good number of drivers were able to perform the very aggressive initiation from the first corner of Clark International Speedway, with some being able to carry the drift all the way to the corkscrew at the rear section of the course.

Compared to the high-powered Toyota Chasers and Nissan Silvias that the guests were using, local guys had to make full use of their car’s inertia to carry the long drift that was expected by the judges. While those guys with high horsepower took to more throttle and smoking tires the whole way, other cars could be heard cutting revs with copious amounts of clutch-kicking just to keep the back wheels spinning. Qualifying runs finished by midday, and following a short break the final tally for the top 32 runs was announced and soon the event proceeded to the tandem runs. 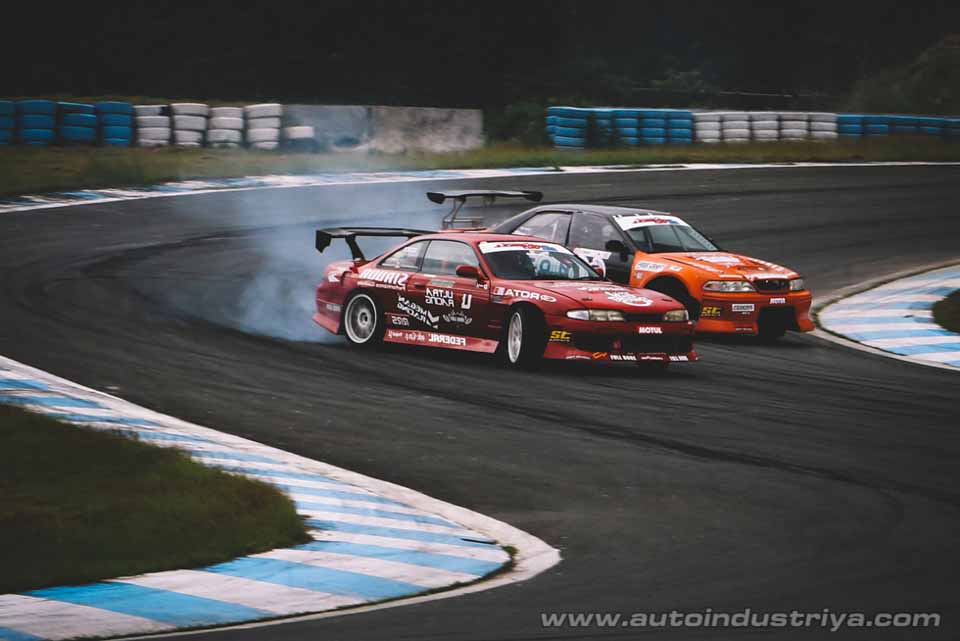 The tandem runs were effectively the ‘moment of truth’ for both the drivers and spectators alike. These side-by-side runs will become a clear-cut comparison of how our local guys fare against the cream of the crop. Off the bat it was clear which drivers would move up the ranks, with some cars lacking outright power to complete the course fully sideways or other drivers making clear-cut errors during tandem runs.

Eventually the top 16 battles were well underway, and still there were a good number of foreign drivers batting against the remaining locals. Some time during the top 16s though Saito and Kadekaru, both still in the running, had mechanical trouble with their vehicles. Saito had to retire his Monster Energy Toyota Chaser and borrowed Hirohide Tanaka’s Chaser to use for the remainder of the battles. Kadekaru, who drove a black Nissan Silvia S15, went for Toni Arakaki’s S14 Silvia for the rest of the battles. 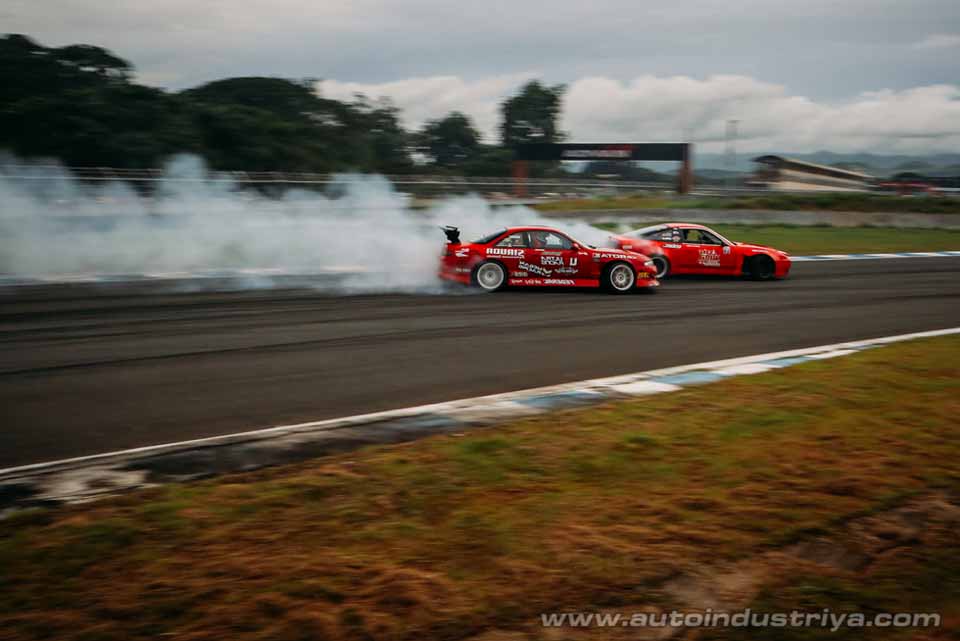 With both top-tier drivers using loaner cars, the locals had a bigger chance of scoring a victory against them later on. With the top 8 looming, only three local drivers remained against 5 guest drivers. Luis Gono, Boodie Dabasol, and Audel Sison were left to contend on the locals’ behalf. Saito did away with Tom Marshall for an entry into the semi finals, while Boodie Dabasol contended with Tan Tat Wei. Once the dust cleared Dabasol moved into the semi finals to battle Saito. 18-year old Luis Gono also had an extended one-more-time battle against Jap-Filipino Toni Arakaki, with Gono eventually moving into the semis. The battle between Kadekaru and Sison was also well fought, and Kadekaru was then matched with Gono.

As four drivers remain to compete, the battles become more consistent and edgy with all drivers are at the top of their game. Gono and Kadekaru, both driving Nissan Silvias, battled for a spot in the final in several bouts that were too close to call. Judges decided however that it was Gono who will make it to the final. His opponent may well be either Dabasol or Saito, both of whom had a splendid battle having two one-more-time calls by the judges. Dabasol was able to take the fight to Saito in a borrowed S13 Silvia as well – and looked like he was having fun doing it too. Following one of their heated rounds, Dabasol could be seen applauding inside the car as they exited the course. No pressure from him then. Following their intense runs however Saito carried more speed throughout the course overall, handing him the spot to battle Gono in the final. 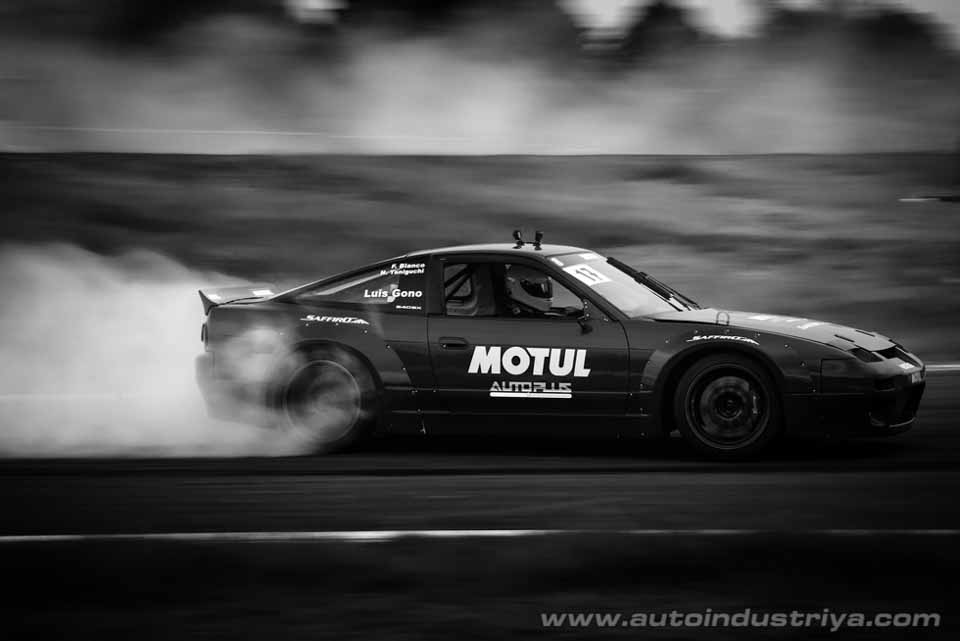 The final battle – as much as it was highly anticipated – were cut short when Gono’s Autoplus S13 Silvia caught a small fire as his leading run ended. While the car was able to run another round following that, it was later discovered that a broken intake manifold resulted in a severe loss in power. That said, Saito pulled away to take the win for Judgement Day 2016.

While this event seemed to be the event that all our drifters were eagerly preparing for, it appears to be just the beginning in terms of global competition. Judgement Day 2016 serves as a ‘licensing event’ for aspiring drivers who will compete in the King Of Nations, an international drifting competition. Next year we may expect an actual King Of Nations event to be held again, and likely our local drifters may be back to the drawing board to prepare till then.