It could be said that this year's running of Le Mans is one of the most memorable races in recent history. Taking the win this year is Porsche with drivers Romain Dumas, Neel Jani and Marc Lieb. The team had initially conceded second place until a twist of fate handed them the win. Their win marks the automaker's 18th win in Le Mans. 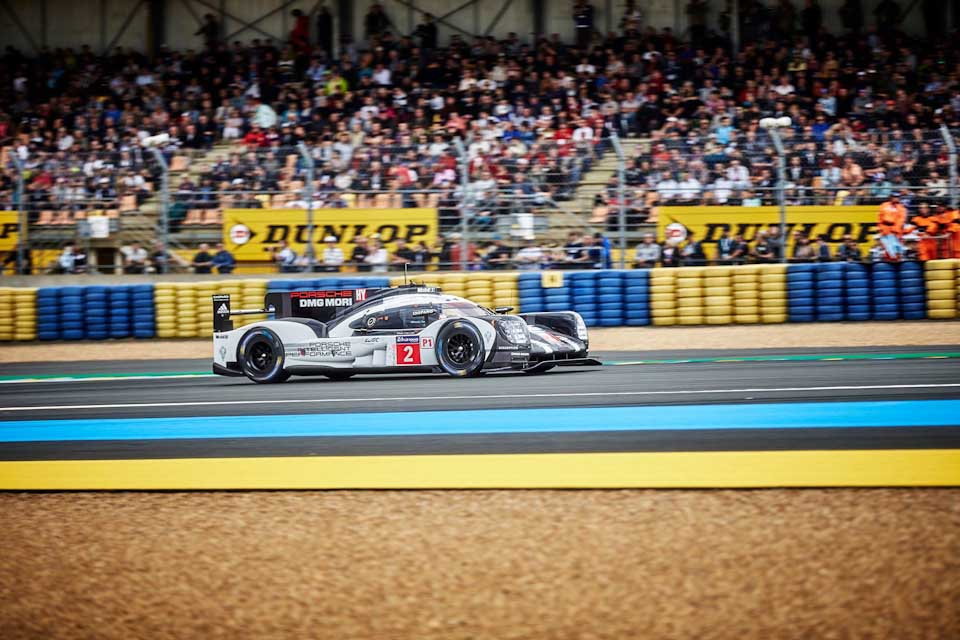 Porsche's charge for the lead was fraught by car vibrations, slow punctures and and double-stinted tires. The Porsches were also heavy on fuel when compared to the Toyotas, requiring them to stop a lap earlier than Toyota. Porsche repeated changed strategies during the race which saw some drivers doing double stints, namely Neel Jani. Trouble also hit the number 1 Porsche when it suffered mechanical problems during the night drive.

Finishing second was the number 6 Toyota of Kamui Kobayashi, Mike Conway and Stephane Sarrazin. Sarrazin had to nurse the car home following bodywork damage that led to high engine temperatures during the final hours.

Audi was prepared to accept the fact that they would not score a podium this year. The team encountered a host of problems that started during qualifying. The team could not post quick lap times due to weather and car number 8 needed a turbo swap during the first 20 minutes. The surviving Audi, car number 7, was not a big factor during the race, staying in fifth or fourth throughout. Car number 8 had its share of bad luck when it drove over the gravel trap and lost drive. Marcel Fassler had to limp the car back to the pits on pure electric drive. 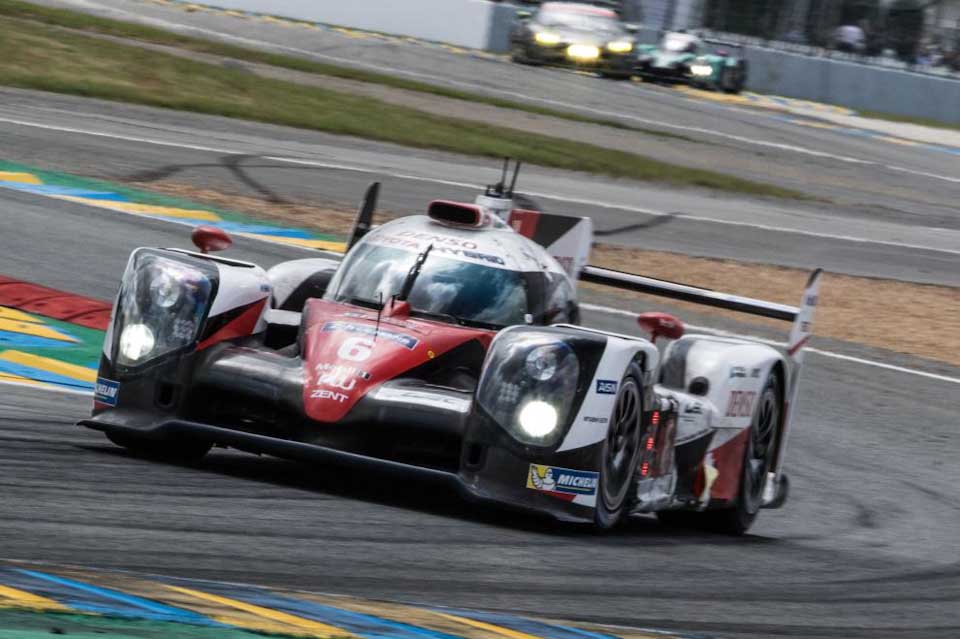 Toyota Gazoo Racing was dominant throughout the race and the car proved to be more efficient than the Porsches in terms of tires and fuel. This initially helped the number 6 hold a significant lead over the Porsche while the other Toyota was posting quicker lap times than the Porsche. Kobayashi encountered problems when he avoided debris on the track and suffered damage to the car's sidepod. The car soon felt imbalanced and cooling problems arose.

Kobayashi's issues allowed his team mate Anthony Davidson to take over the lead and was dominant since then. Toyota Gazoo was also pulling in quick pit stops and driver changes throughout and easily caught up with the number 2 Porsche of Neel Jani. The lead was soon big enough for Toyota to do a major pitstop and not lose the lead in the process. Unfortunately for Toyota, the car lost power in the final minutes of the race, slowing down signifiantly on the Mulsanne straight and the engine expired as soon as it crossed the line for the final lap.

At that moment, Porsche took over the lead for the LMP1 class and headed for their 18th win in Le Mans. 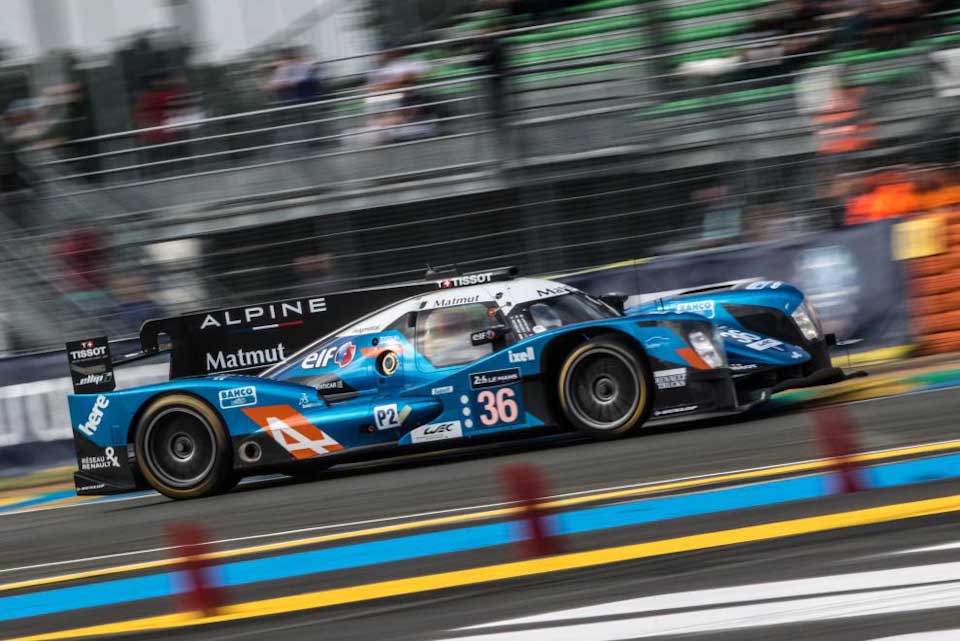 In LMP2, Alpine's return to Le Mans proved to be successful after taking the class win. The team stated out strong, taking the lead from pole-sitter G-Drive Racing early on. The only times Alpine lost the lead was during pitstops. Despite taking pole for LMP2, G-Drive Racing was unable to keep the lead after the team needed extra pitstops for tires. The team was outside the podium until the Thiriet Racing car, running second at the time, crashed heavily at the end of Mulsanne. Less than a minute later, the KCMG car had an off at the start of Mulsanne.

There were also a lot of shunts in the LMP2 class. The Ligers of John Pew and Tracy Krohn collided at the first chicane of Mulsanne. The rear end of Krohn came loose, veering into Pew in the process. Despite the impact, the two drivers carried on racing.

Manor also had a tough race this year. Matthew Rao ran wide in Indianapolis corner, almost collecting the number 6 Toyota when it rejoined the track. On the way back to the pits, the Manor's bodywork came loose and the front wheels got caught under the front wheels. With the wheels unable to turn, Rao slammed into the outside wall of the Porsche Curves, ending Manor's race.

Benefitting from all the incidents was SMP Racing with Vitaly Petrov, Victor Shytar and Kirill Ladygin. The all-Russian team ran a relatively quiet race and leapfrogged to third. 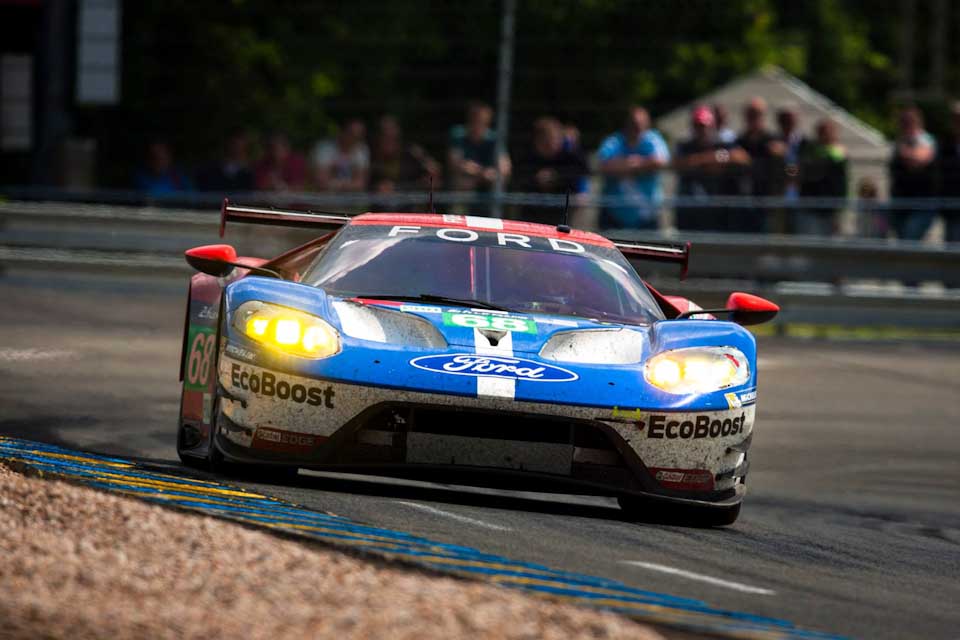 The GTE Pro Class saw close racing between Risi Competizione Ferrari and Ford. The two teams were playing a cat and mouse race throughout and were always in sight of each other. The leading Ford GT, car 68, was penalized for keeping the car running during refueling, handing the lead to the Risi Ferrari. With Joey Hand behind the wheel, he did his best to catch up to Fisichella and was able to overtake him the following day. The Ford's lead was extended when the Ferrari spun exiting the Porsche Curves.

The number 69 Ford on the other hand hit a snag during the night drive but was able to carry on racing. Car 66 ran a solid fourth throughout while Car 67 attracted all kinds of issues with gearbox problems and being punted out of the way.

Last year's GTE Pro winner, Corvette Racing, was unable to finish this year when Tommy Milner's car broke loose before the Dunlop Chicane, sending him square on to the tire barrier. Aston Martin Racing on the other hand was in contention until the tire blew.