Following a grueling wet weather race that started piling on since the sun went down, the Manthey Porsche 911 GT3 R came out on top against Black Falcon’s Mercedes AMG GT3 after racing the Green Hell for 24 hours straight.  Thanks to rain, fog, and a subsequent red flag because of the conditions, the tide of battle turned several times in the top SPT9 class – with Manthey Porsche winning after hours of trading blows with their Mercedes rivals. Being their first win since 2011, Manthey now holds the record of six overall wins at the 24 Hours of the Nürburgring. 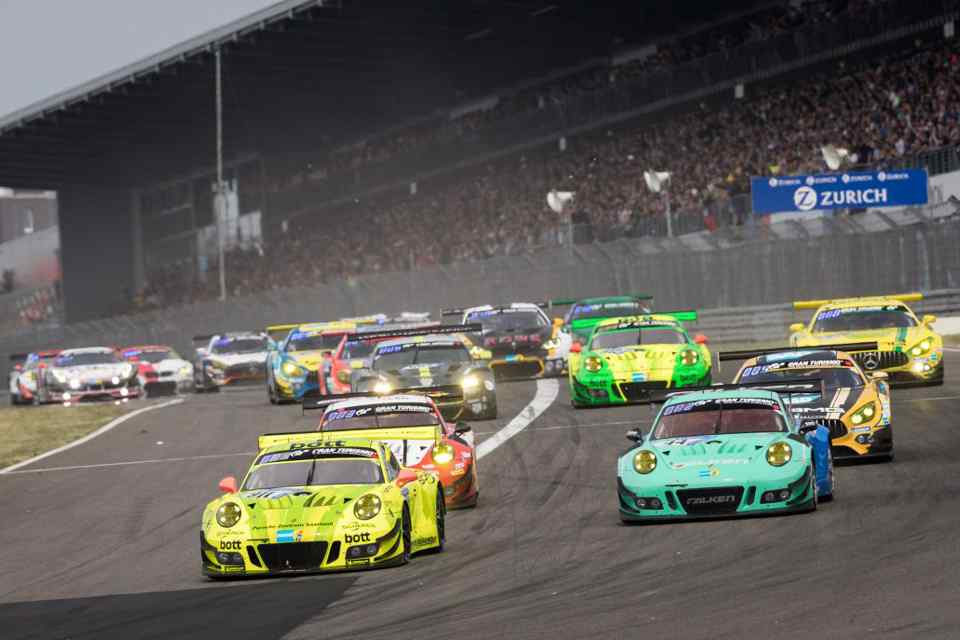 Initially, the team gained a considerable lead early on with their main #911 car. With Kevin Estre piloting it to an early lead from race start on Saturday afternoon, the #911 Manthey set the fastest lap and even broke a lap record that was set back in 2015. The #911 car controlled the lead for SPT9 until the wee hours of the morning when Romain Dumas lost control over a patch of oil at Pflanzgarten – prematurely ending the race for #911 and handing the lead over to the #4 Black Falcon Mercedes. 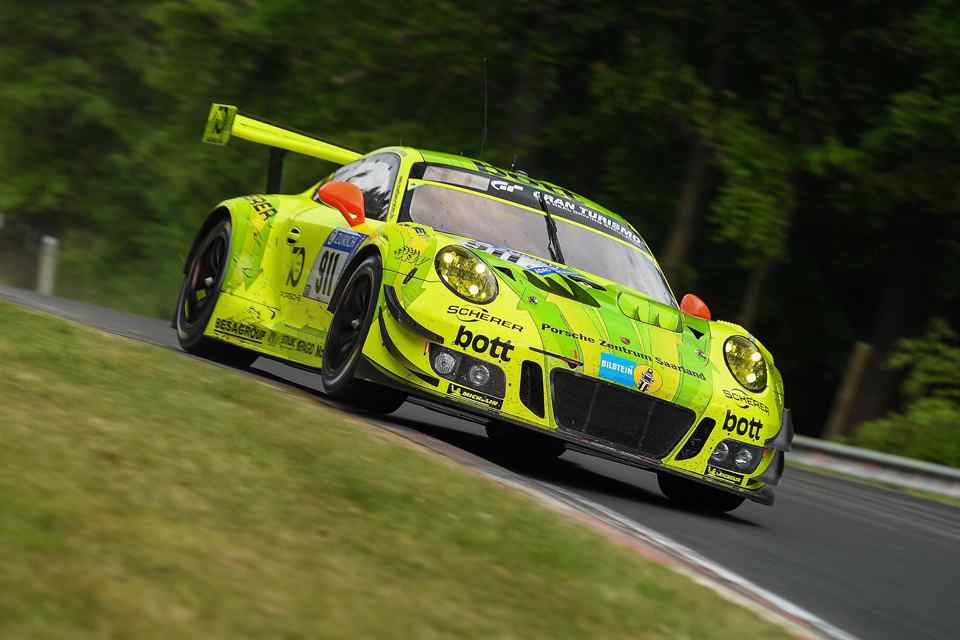 It was from this point forward that the battle for lead position between Manthey’s second car, #912, and the #4 Black Falcon Mercedes began heating up. Trading the lead several times thanks to pit stops and race strategy, #912 lost their opportunity to fight for the lead after being handed a 3 min 32 second stop-and-go penalty for accelerating early in a Code-60 (60 km/h limit) zone. The battle seemed to be well in favor of Black Falcon until the 20.5 hour mark when a red flag was raised over grueling conditions including fog that won’t allow drivers to see beyond 100 meters. 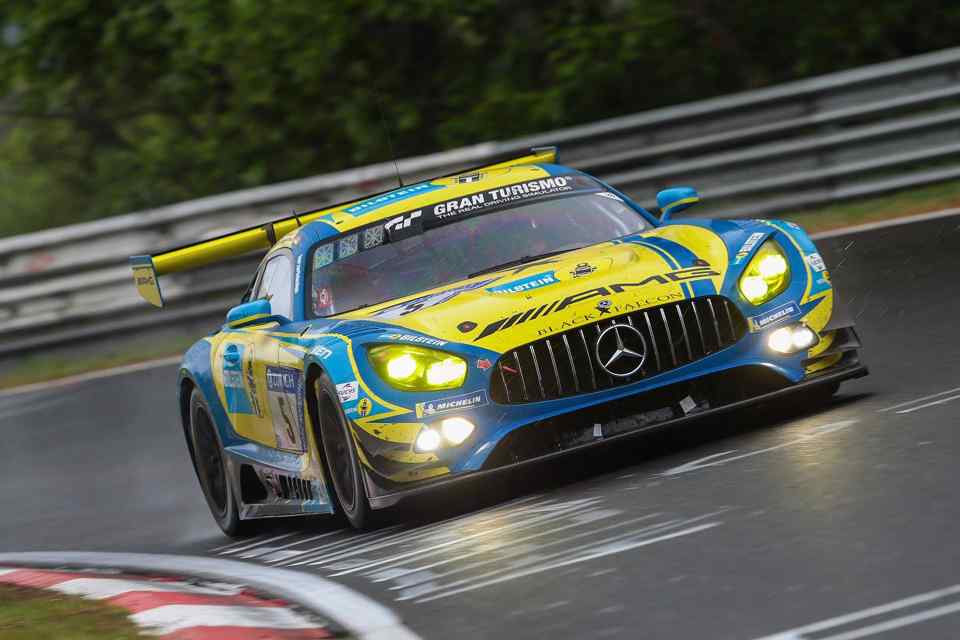 The red flag actually played against Black Falcon because they had a healthy 40+ second lead against the #912 Manthey. With that, both cars will have to go neck-and-neck for the lead as both were on the same lap when the red flag was waved – rendering Black Falcon's lead useless. With the red flag lasting for roughly two hours, racing resumed with only 90 minutes left on the clock – effectively a sprint race to the finish given the conditions. 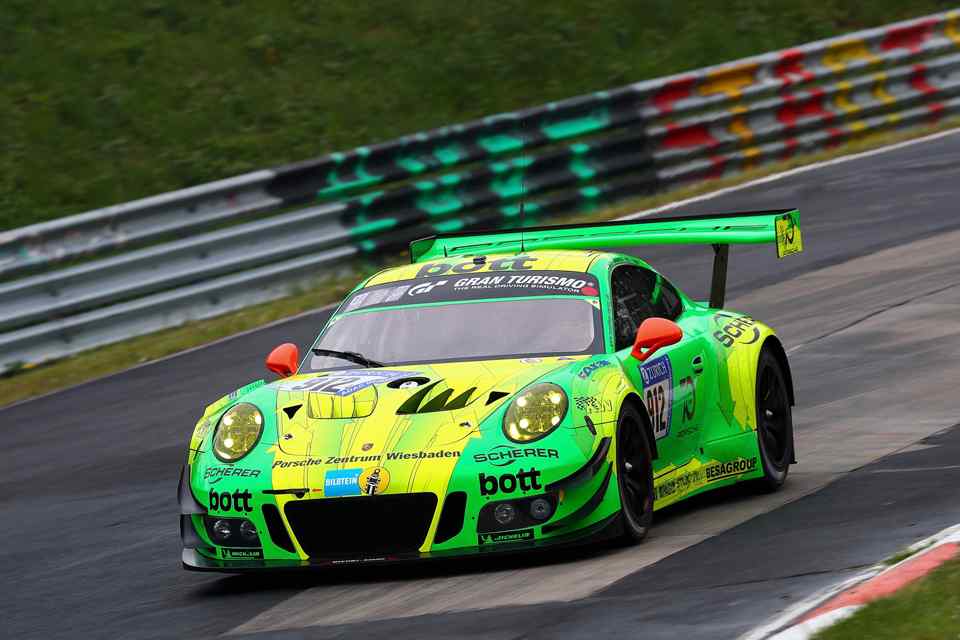 The final stint put Briton Adam Christodoulou in the #4 Black Falcon AMG in P1 versus Frenchman Fred Mackowiecki in the #912 Manthey following closely behind. After a couple laps of pressuring the Mercedes, Mackowiecki made the move into the first hairpin/chicane at the end of the Nürburgring GP straight. Diving in from the outside and causing the Mercedes to overshoot its braking into the right hairpin, both cars traded sides going into the subsequent left hander. With the #4 Mercedes on the inside and #912 on the outside, both cars made contact causing a 90-degree spin for the AMG GT3. Mackowiecki was able to counter the Porsche’s spin early enough, thereby handing Manthey the lead for the race.

Christodoulou wasn’t going to let Manthey get away with the lead that easily though, closing the gap with the Porsche later on in the Nordschliefe thanks to lap traffic. With the Mercedes having an advantage at the long Döttinger Hohe straight, Christodoulou wanted to get as much momentum going to draft into the Porsche. Unfortunately the Mercedes understeered coming out of the right hander before the long straight and clipped the barriers, giving Manthey the breathing room they needed to take the victory for this year’s 24 Hours of Nürburgring. 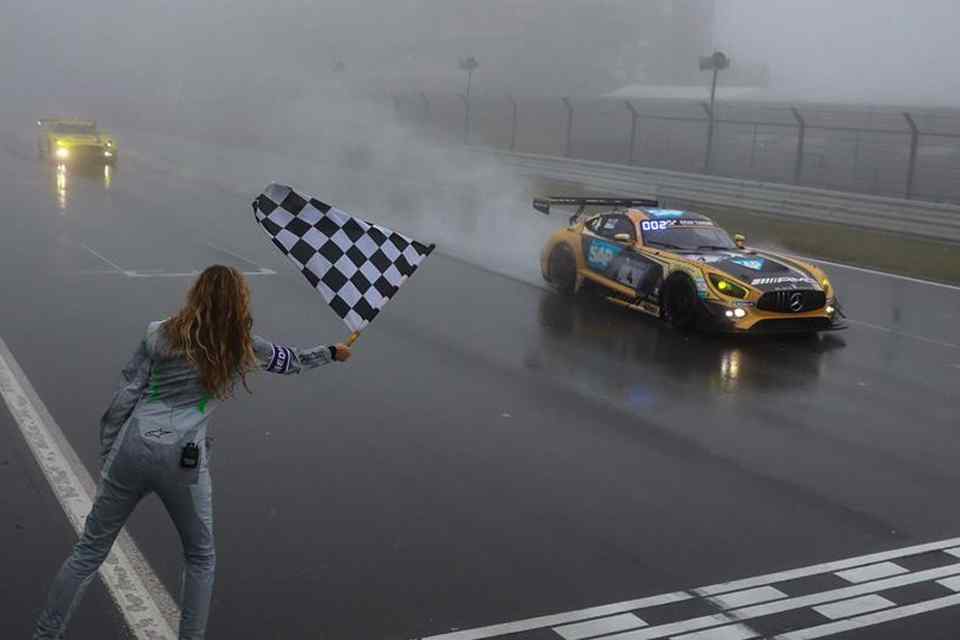 The battle for third in SPT9 brewed between another pair of Black Falcon Mercedes and Aston Martin’s outgoing Vantage GT3. That said, Black Falcon takes another vehicle to the podium with the #5 AMG GT3 piloted by Yelmer Buurman, Luca Stolz, Jan Seyffarth, and Thomas Jäger.

The Manthey #912 was piloted by the team of Fred Mackowiecki, Nick Tandy, Richard Lietz, and Patrick Pilet, while the #4 Black Falcon Mercedes was handled by Adam Christodoulou, Maro Engel, Dirk Müller, and Manuel Metzger.