This year's running of the 24 Hours of Le Mans is one for the history books as all LMP1 racers experienced troubles with an LMP2 team nearly winning the race. Porsche clawed back from mechanical issues to take their 19th win with Jackie Chan DC Racing in second overall and first in their class. 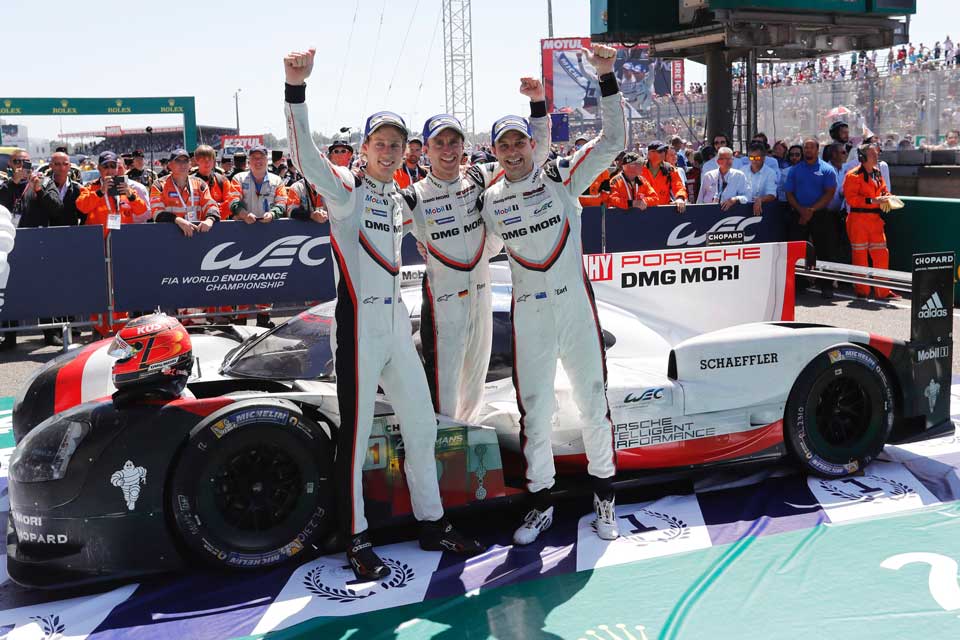 Porsche's victory did not come easy. The eventual winner, car 2 which is piloted by Earl Bamber, Timo Bernhard, and Brendon Hartley, suffered hybrid problems before sunset and was in the pits for repairs for over an hour. Toyota meanwhile was set on claiming the win, setting record lap times and further extending their lead. The Japanese squad was hoping for redemption this year but it was not to be. Two of the three Toyotas would encounter troubles within the span of an hour.

On the eighth hour, the number 8 Toyota, driven by Sebastien Buemi, Anthony Davidson and Kazuki Nakajima, had problems with its hybrid system and briefly caught fire when it stopped at the pits. A few hours later, the number 9 of Nicolas Lapierre, Yuji Kunimoto and Jose Maria Lopez was hit by an LMP2 car on the side, puncturing its tire and later stalled. Unable to drive back to the service station, Toyota was forced to retire the car. Less than an hour later, car 7's clutch gave out, ending Toyota's bid for the overall win. Car 7 consisted of Mike Conway, Stephane Sarrazin and Le Mans lap record breaker Kamui Kobayashi. 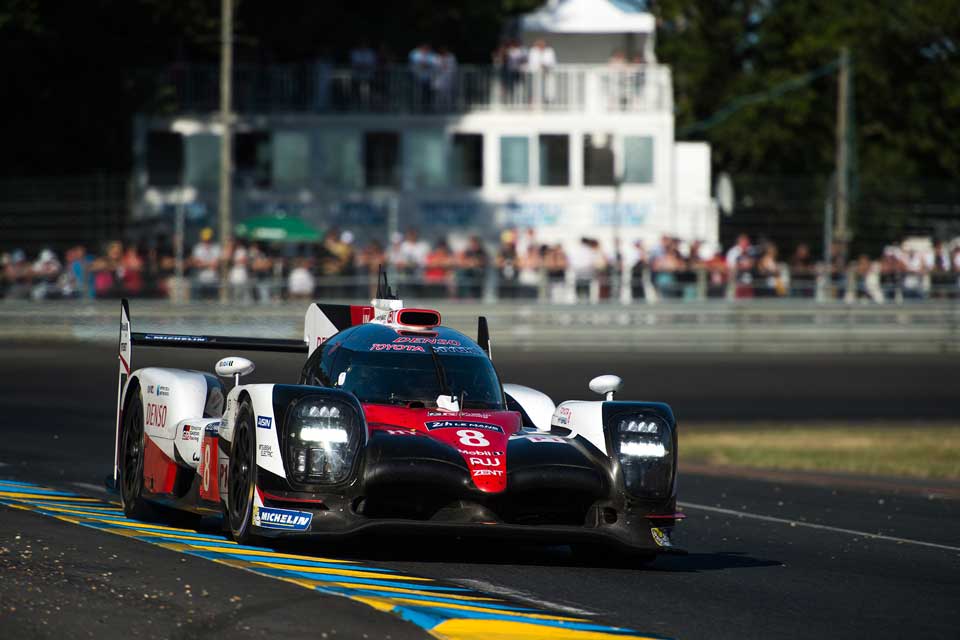 Porsche inherited the LMP1 and overall lead on the the 12th hour and the surviving number 1, driven by Neel Jani, Andre Lotterer and Nicky Tandy, kept the lead for a significant amount of time. Later on, the German team dispatched car 2 to claw back lost time and try to salvage points for their category. Toyota was also able to repair car 8 despite the small fire but it was 30 laps down from the leading Porsche.

When the sun came up, it was still the number 1 Porsche that was leading right up until the 20th hour. The engine lost all oil pressure and was forced to run on pure electric mode. It was then unable to get back to the pit, meaning all five LMP1 cars suffered problems in one way or another. This also meant that an LMP2 racer, in the form of Jackie Chan DC Racing, took the lead at Le Mans for the first time ever.

At the final hour of the race, Porsche was able to take the overall lead back from Jackie Chan DC Racing. With a 9 lap lead over the surviving Toyota, Porsche not only took the LMP1 win but take the victory overall. At the end of the 24 Hours, only two LMP1 cars survived with one from Porsche and one from Toyota. Making this win emotional for Porsche is the fact that they were able to overcome a 19 lap deficit to claim the overall win. 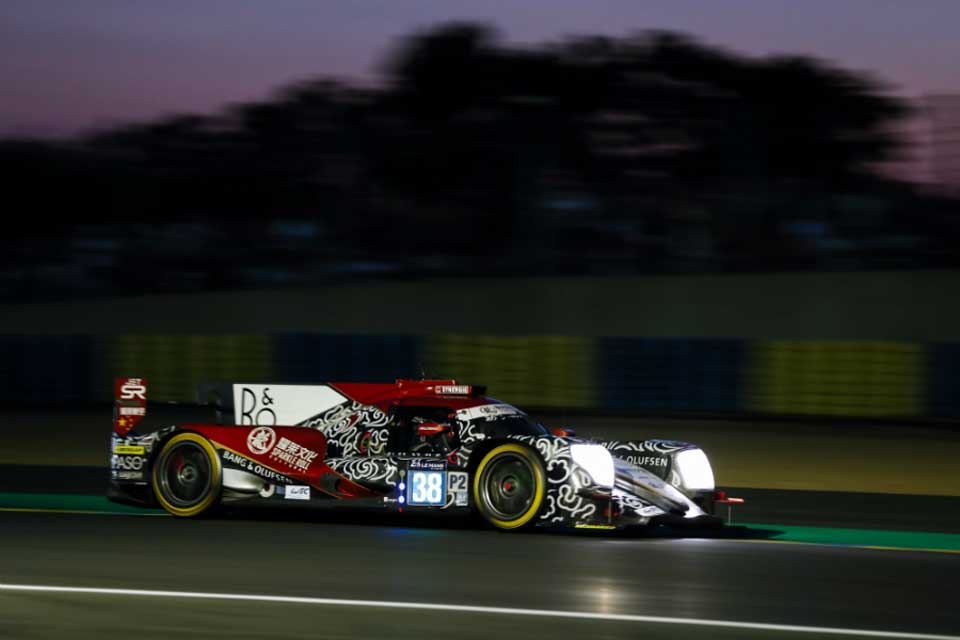 Over at LMP2, it was a close fight between the Rebellion Oreca and Manor Oreca. By the first hour, the number 31 Rebellion team of Bruno Senna, Nicholas Prost and Julien Canal was able to pass the two Manors (number 25 and 24) but were still fighting the lead. A few minutes later, the 26 Gdrive Oreca of Roman Rusinov, Pierre Thiret and Alex Lynn was collected by the spinning 88 GTE-AM Porsche. The 26 Gdrive Oreca later retired due to terminal damage.

Later on, the 28 TDS Oreca veered into the path of the 82 GTE Pro Risi Competizione Ferrari, knocking the latter into the wall and a violent impact. With debris all over the track, the safety car was called in. A few hours later, the 38 Jackie Chan DC Racing Oreca also ran into a bit of trouble, running wide and getting into the sand trap. It carried on racing eventually. At that moment, it appeared that Rebellion Racing secure in their top spot with the 31 car taking the class lead. But like Toyota, they too would run into problems in the 12th hour. 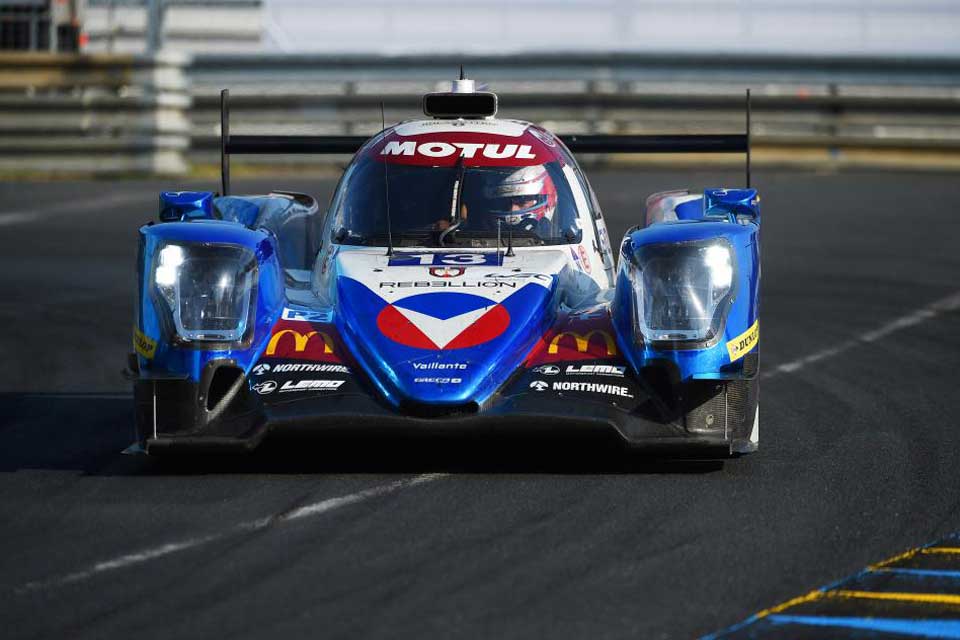 Car 31 ran into issues and was forced to do repairs, handing the lead to car 13, also a Rebellion car which is driven by the team of Nelson Piquet Jr., David Hansson and Mathis Beche. The 38 car of Ho Pin Tung, Thomas Laurent and Oliver Jarvis recovered to run second by the halfway point. When car 13 pitted, Jackie Chan DC racing took the lead for LMP2.

Jackie Chan DC Racing would be unchallenged for the remainder of the race after transmission issues plagued the 31 Rebellion car. With the 13 a couple of laps down on the Chinese team, Tung, Laurent and Jarvis would nurse the car to LMP2 victory and second overall. The team also made history by being the first Chinese team to finish on the podium at Le Mans. 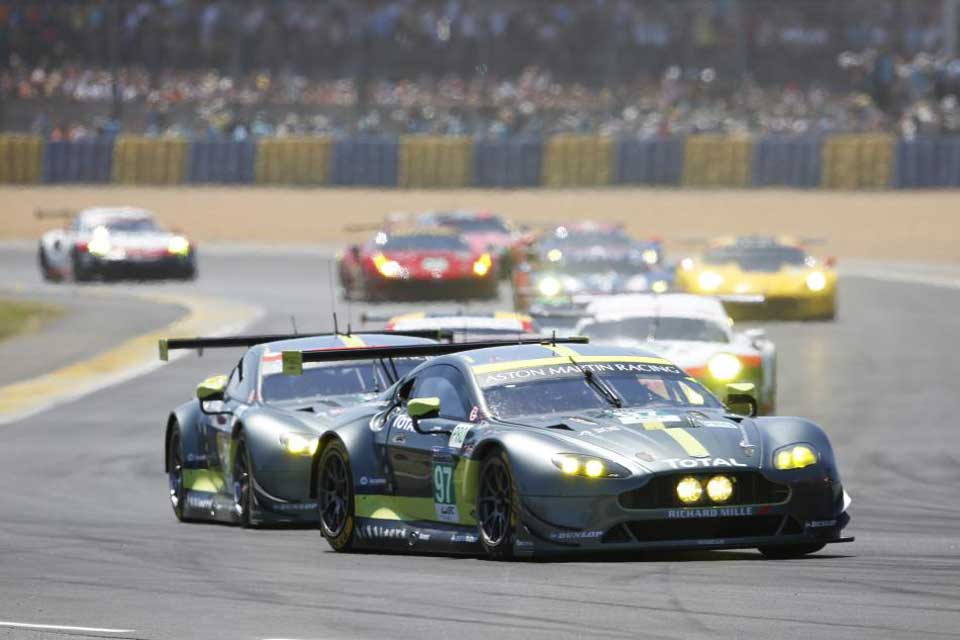 In GTE Pro class, in was everyone's race with the Aston Martins making headway. However, the Corvettes were always in the background, ready to pounce should the British team run into mechanical maladies or accidents. Ford was behind the two manufacturers due to restrictions made to their turbochargers but most of the GTE Pro class was within 30 seconds of each other for the first couple of hours.

Aston Martin was keeping a solid lead until the 95 car of Nicki Thiim, Marco Sorensen and Richie Stanaway blew a tire and ripped out a significant amount of the fender. Inheriting the lead was car 97, driven by Darrent Turner, Jonathan Adam and Daniel Serra. They were then being shadowed by the 67 Ford of Andy Priaulx, Harry Thicknell and Luis Felipe Derani. The Corvettes meanwhile were doing battle with the Porsches. 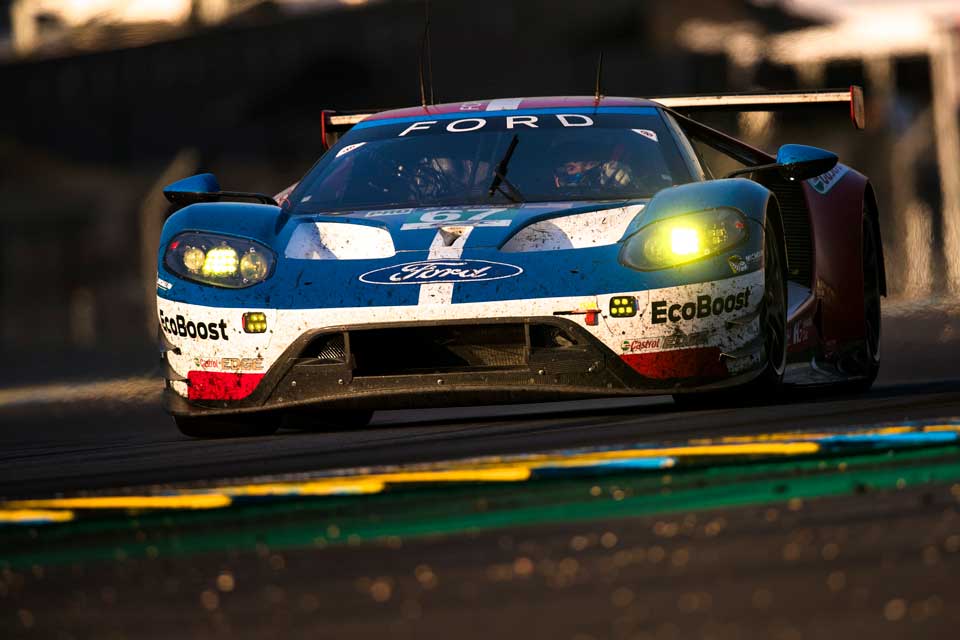 As night slowly crept in, the 64 Corvette of Tommy Milner, Oliver Gavin and and Marcel Fassler lost a wheel and crashed hard into the retaining wall. Meanwhile, the 92 Porsche of Michael Christensen, Kevin Estre and Dirk Werner got stuck in a sand trap following a spin. After the chaos of the night, the 95 Aston Martin would bounce back and regain the lead but would lose it to the 63 Corvette of Jan Magnussen, Antonio Garcia and Jordan Taylor. The 97 Aston Martin meanwhile would stay close to the rear of the leading Corvette.

The race for the GTE Pro win would be decided in the last nine minutes of the day-long race. The 97 Aston Martin attempted to dive on to the inside of the 63 Corvette but locked up the brakes, losing vital ground on the American team. All was not lost however as the Corvette careened into the sand along the Mulsanne straight, allowing the Aston Martin to catch up again. Then on the final set of chicanes, the Aston Martin overtook the Corvette with 26 seconds left on the race clock. More drama would ensue as the Corvette later suffered a puncture, handing second place to the 67 Ford. It would be Aston taking the win, followed by Ford in second and Corvette in third. 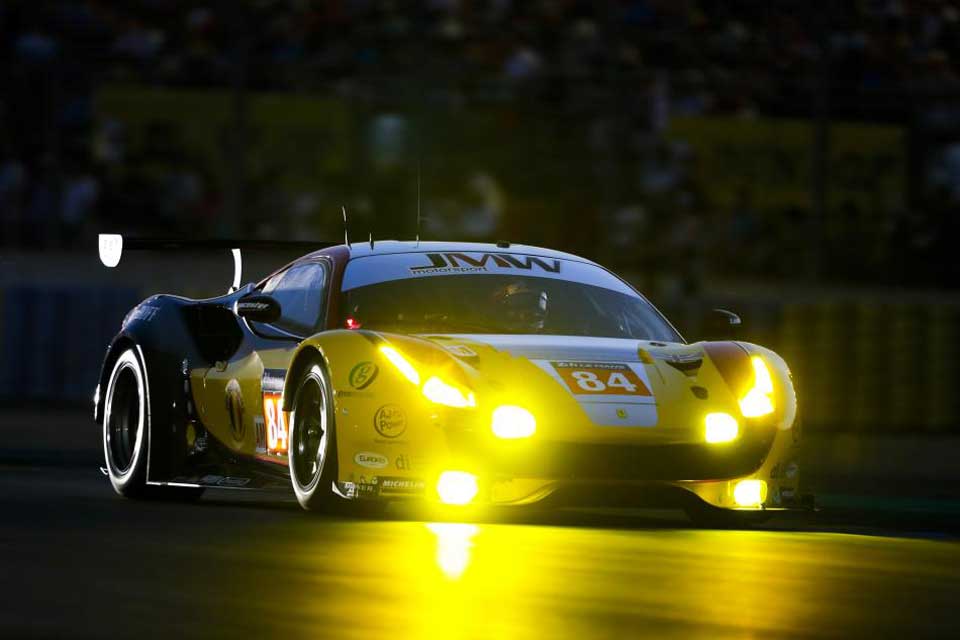 In GTE Am, Ferrari fought off its contenders by taking a 1-2-3 finish in their class. Winning GTE AM is the 84 JMW Motorsport team of Rob Smith, Will Stevens and Dries Vanthoor. Car 55 took second with Duncan Cameron, Aaron Scott, and Marco Cioci, driving for Spirit of Race. In third was the 62 car of Cooper MacNeil, Bill Sweedler and Townsend Bell.

2018 Formula 1 season to bring back German and French GP

2018 Formula 1 calendar set with 21 races, sees the return of France and Germany