After coming close to victory in a few races this season, Daniel Ricciardo ends a two year win drought after crossing the line first at this year's Malaysian Grand Prix. The race weekend was made sweeter for Red Bull Racing after the team made its first 1-2 finish after three seasons. 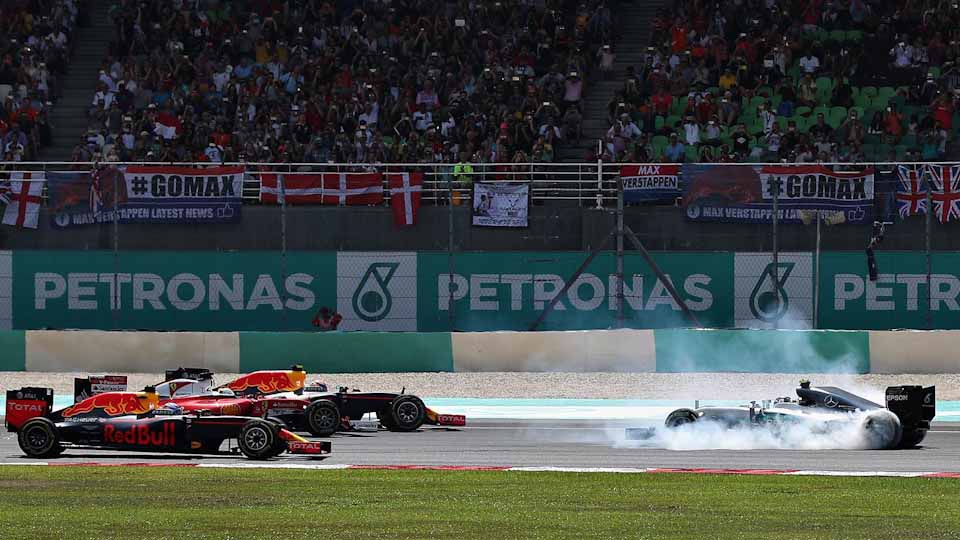 The action started as soon as the field entered the first turn. Polesitter, Lewis Hamilton, kept his lead while championship leader Nico Rosberg was tagged by Sebastian Vettel. The other drivers were forced to take evasive maneuvers to avoid the stricken cars. Rosberg spun out while Vettel came off worse when the front suspension of his Ferrari collapsed. The incident brought out the virtual safety car and Rosberg plummets to seventeenth place.

Virtual safety car period over and Hamilton went off with a rocket start with Daniel Ricciardo jumping to second place after the first lap incident. Max Verstappen, meanwhile, overtakes Sergio Perez to claim third place. Kimi Raikkonen takes over fourth after taking on Perez on the outside. Further back, it's a fight for ninth place between Romain Grosjean and Fernando Alonso. Alonso eventually snuck past Grosjean. 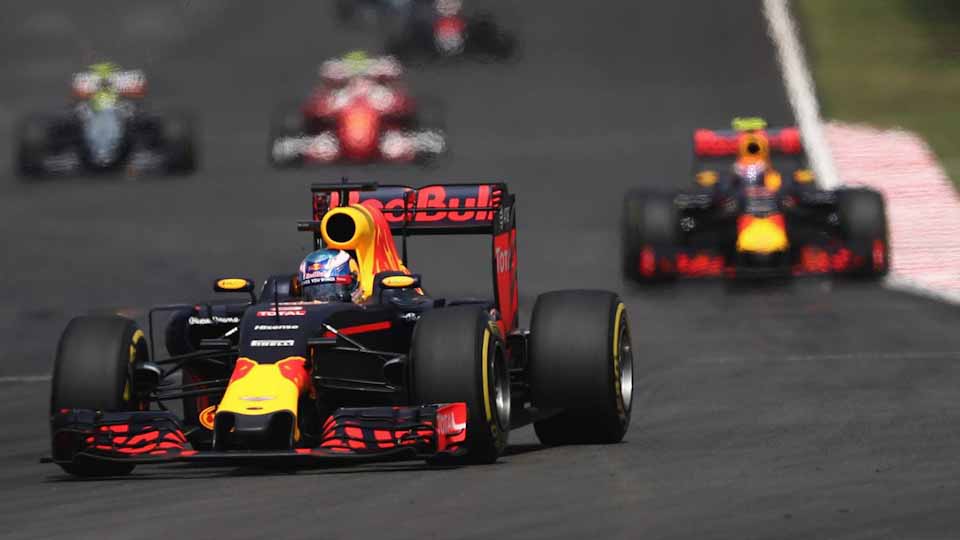 Back in front and it was Lewis Hamilton pulling away from Daniel Ricciardo, getting up to two seconds ahead of the Red Bull Racing driver. Ricciardo was also coming under threat from his own team mate, Max Verstappen, who was less than a second behind. The second virtual safety car of the day would be brought out by Romain Grosjean. Entering a fast left-hand turn, Grosjean's Haas suffered brake failure. The Frenchman was able to scrub off enough speed and spin the car to avoid a heavy shunt with the tire barrier. At this point, some teams opted to go for their pit stops.

During the rush of pitstops, Nico Rosberg was now in 11th place, quickly reeling in the Renault of Jolyon Palmer. After the tire changes, it was still Hamilton ended up in second after Verstappen opted not to pit. Hamilton made up for the position he lost by posting faster laptimes than Verstappen, who was feeling his Pirellis degrade and lose grip. The rookie eventually dove into the pits, handing the lead to Hamilton yet again. With his teammate getting a new set of tires, Ricciardo moves up to second. Rosberg continued his charge to the front and was in fifth by the halfway point. 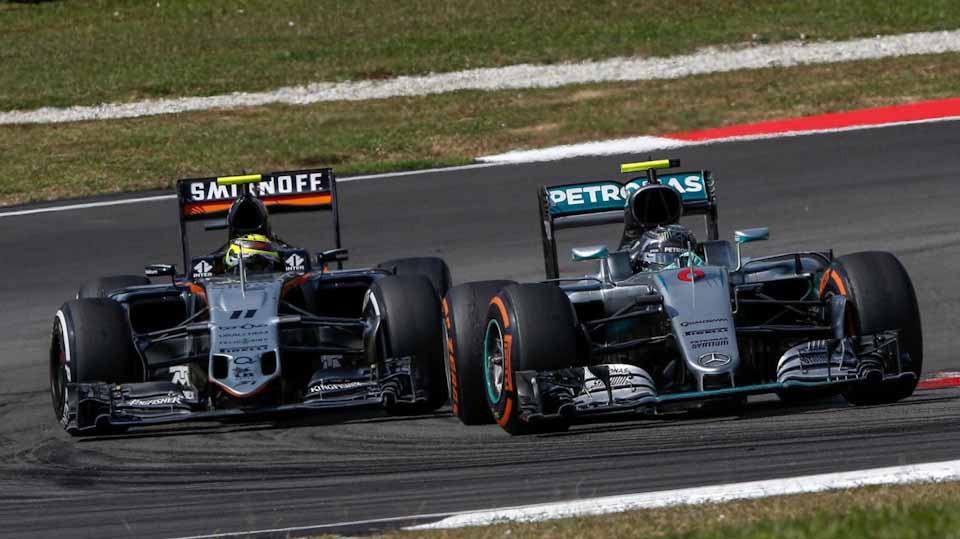 Rosberg continued his drive for more points as he caught up to Kimi Raikkonen for fourth place. The Mercedes-AMG driver made a bold move on the Ferrari, weaving left then swinging right, catching Raikkonen with a wide open left side. The two made contact as Rosberg barged past the Raikkonen, much to the displeasure of the Finn. Another battle was brewing for second place between the two Red Bull Racing drivers. Verstappen had caught up to Ricciardo and the two were locked in a dogfight with Red Bull not giving team orders. With the two slowing each other down, Hamilton kept up the pace with a lead of over 20 seconds. 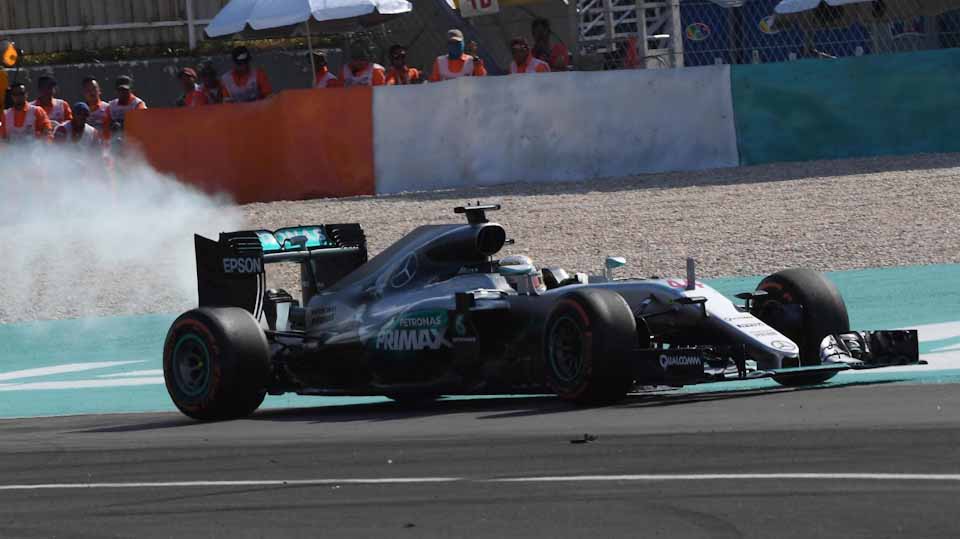 The race would take a dramatic turn less than a lap later. Seemingly poised for victory, the engine in Hamilton's car blew up in dramatic fashion, shooting flames out the back and scattering oil on the track. The fluids left by Hamilton's car brought out the third virtual safety car period of the race and put the brakes on Ricciardo and Verstappen's battle for what is now the lead. While all of that was happening, Esteban Gutierrez mysteriously loses a wheel and is out of the race. 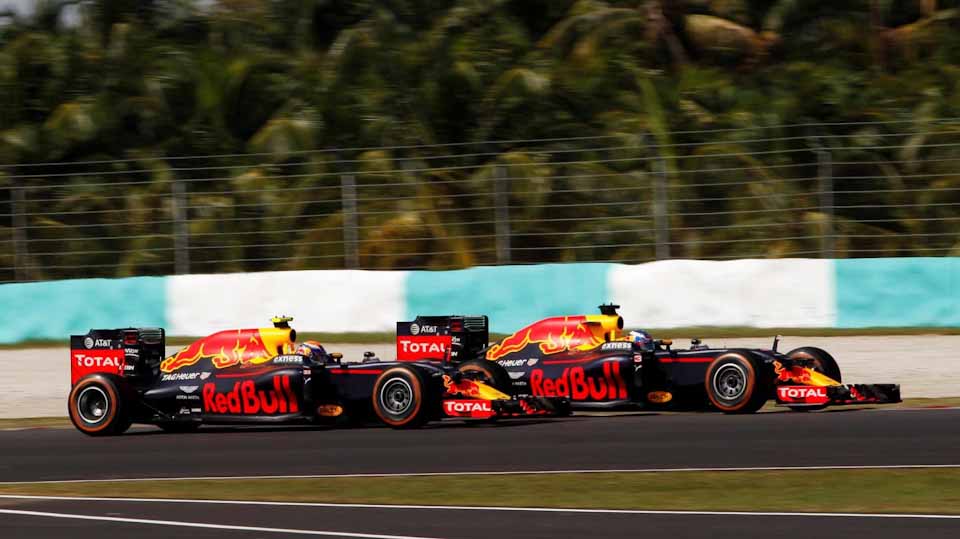 Racing resumed towards the end of the race with Ricciardo in the lead and being chased down by Verstappen. Both were running on supersoft tires but Verstappen was forced to fit used tires following tire usage rules. With fresher tires, Ricciardo kept a consistent gap to his team mate and eventually took the checkered flag. Verstappen was over one second behind to complete Red Bull Racing's first 1-2 finish of the season. Rosberg recovered and gained valuable points in third.