Grabs lead from Sordo at latter half of rally

It's official: the 2016 WRC driver's champion is Sebastien Ogier after fending off challengers at this year's Rally de Espana. His closest threat to the championship, teammate Andreas Mikkelsen, rolled his car during the rally, handing the title to Ogier. 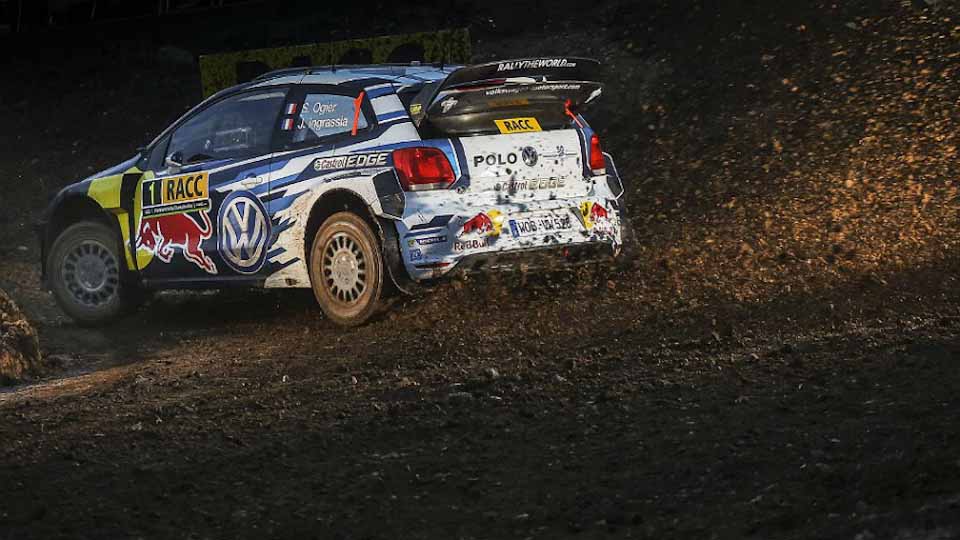 Ogier's run for his fourth title did not come easy. On the first day of the rally, taking the lead was Ott Tanak in his Ford Fiesta WRC. The tricky conditions of SS1 consisted of damp asphalt which forced some drivers to be cautious. Hyundai's Thierry Neuville described conditions that day as “hell”. Lorenzo Bertelli pipped Ogier for second place as the championship leader had to settle for third on SS1. Neuville braved the treacherous conditions of SS2 to claim the lead of the rally. Hayden Paddon meanwhile kept Ogier at bay by taking second in the overall standing for Rally de Espana. SS2 would also claim the rally's first victim. Kris Meeke rolled his Citroen after sliding wide early in the stage.

The championship leader then fought back in the second day of the rally. Ogier ran a smooth and clean race while the others continued to fight the muddy and slippery conditions in Catalunya. His conservative yet consistent run gave him the lead with Neuville just a few seconds behind. 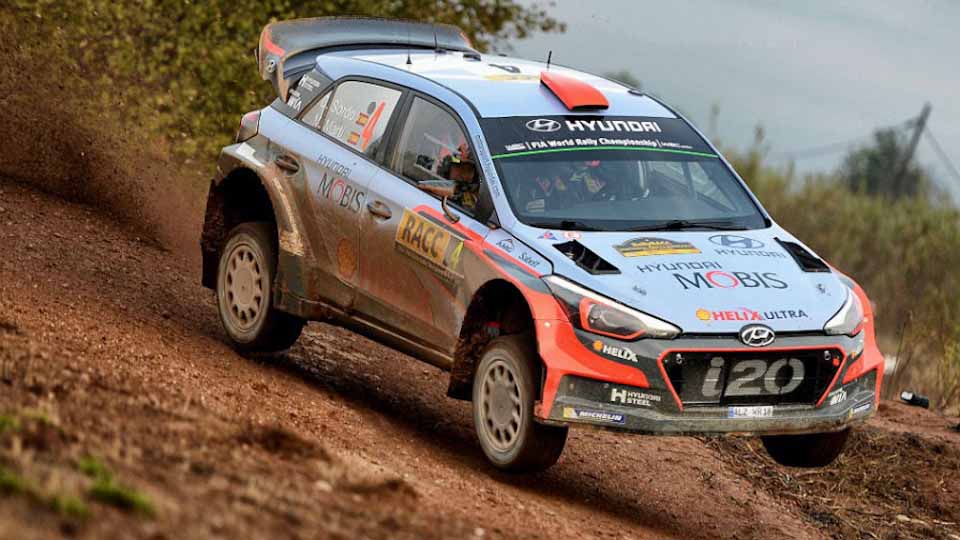 Conditions improved by the next stage with the rain stopping, drying up the roads and hardening the mud. It would be Dani Sordo to climbing to the top of the rally leaderboard by posting the fastest times for the day, demoting Ogier to second place. Neuville meanwhile struggled, stalling his car when he spun out. Andreas Mikkelsen was also beginning to make his presence felt in the rally when storm closed in on the later stages.

It was back to muddy conditions on the third day and Jari-Matti Latvala led the charge of Volkswagens by winning SS8 and SS9. Sordo however maintained his lead over Ogier as the Hyundai driver aimed for a home crowd win. Mikkelsen also had a consistent run to keep third overall and keep his championship hopes alive. When the next stage dried up, Ogier went all out and cut Sordo's lead in half as the latter struggled with understeer on the hot tarmac. 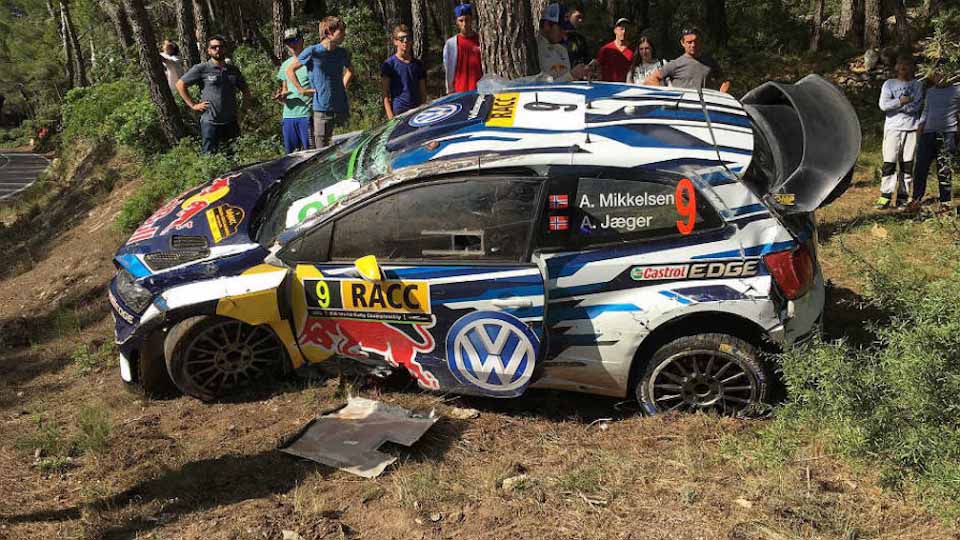 Mikkelsen's bid for the championship ended when he rolled his Polo WRC in a bid to chase Ogier for second place. He and co-driver Anders Jaeger were unhurt after the car clipped a barrier and rolled the car several times before coming to a rest.

Conditions improved on the final day of the rally and Ogier went on full attack as the Hyundais struggled with their set ups. Ogier blasted ahead of Sordo to gain a 12.7 seconds by the end of SS17. With Mikkelsen out of the way, Neuville was able to get third overall before entering the final stages of the rally. 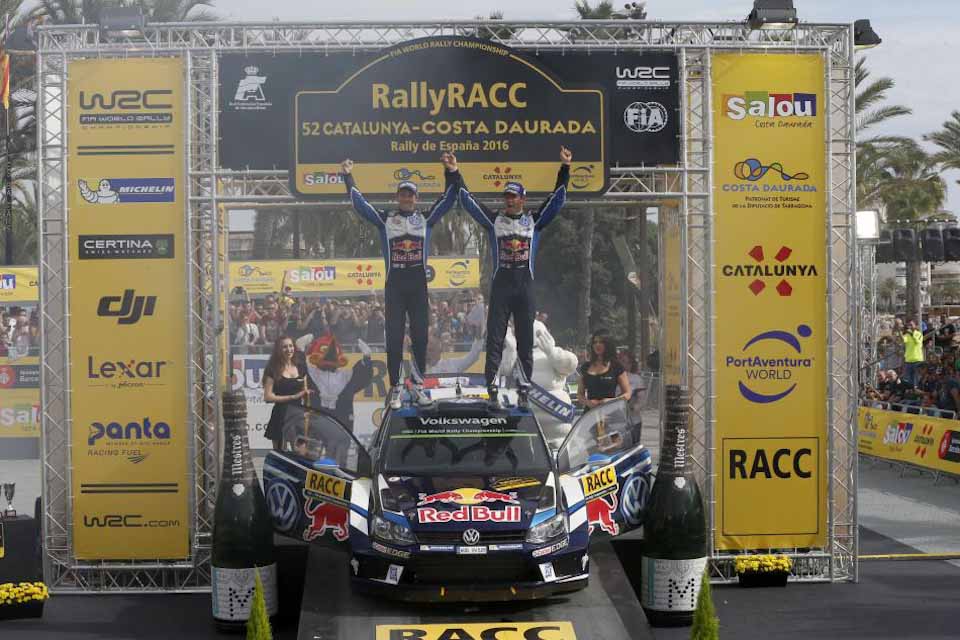 By SS18 and SS19, Ogier kept up the pace as the Sordo did his best to catch up to the leader. By that time, Ogier had built up a margin away from Sordo and eventually claimed the win for Rally de Espana. The win meant Ogier clinched the 2016 driver's championship with two races to go. Just 15 seconds away was Dani Sordo with team mate Theirry Neuville in third. Despite not winning the rally, Hyundai had a solid performance with all i20 WRCs finishing in the top five with Hayden Paddon in fourth. Rounding up the top five was Mads Otsberg in his Ford Fiesta.