After Citroen bagged the constructor's championship during the Spanish leg (just before this round), the team has another reason to celebrate with Jose Maria Lopez winning the driver's crown for 2015. Lopez clinched the championship after winning race 1 in the Chang International Circuit, Thailand.

From the start, Lopez showed his dominance over the field by qualifying pole and gaining 5 more valuable points. Behind him was fellow Citroen driver Sebastian Loeb and behind Loeb was Yvan Muller, making it a Citroen 1-2-3. Lopez made a clean getaway from the field but Loeb was soon on the rear bumper of the championship leader's Citoen C-Elysee. Loeb shadowed Lopez lap after lap but eventually ran out of time, handing Lopez his ninth win of the season. The points haul was enough to give Lopez the 2015 driver's championship. Completing Citroen's dominance in Thailand is Ma Qing Ha in third place. Finishing fourth was Mehdi Bennani, also driving a Citroen, and was the leading independent driver for the round. Honda's Gabriele Tarquini fought hard from his 12th starting position on the grid to bring home his Civic in fifth place. Starting even further from the back, Rob Huff charged his way from the final row of the grid for a sixth place finish. Tiago Montiero limped his Civic home in seventh after getting collected in a crash that involved Muller, Norbert Michelisz and Hugo Valente. Rounding up the top 10 were Stefano D’Aste, Grégoire Demoustier and Tin Sritrai with Sritrai getting his first point in WTCC. While Lopez was on his was to victory, Yvan Muller encountered rotten luck by being involved in a pile-up that led to the dispatching of the safety car. Other retirements for race 1 included LADA team mates Nicky Catsburg and Nicholas Lapierre along with Tom Coronel who all encountered problems in turn 1. John Fillipi was also forced to retire after clipping a barrier in a failed overtaking attempt, damaging his suspension. 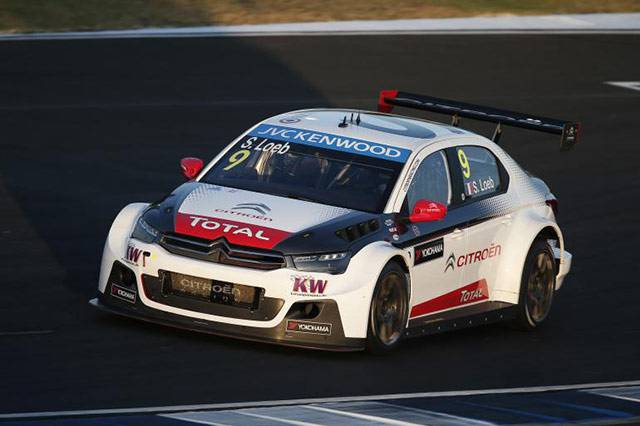 Tiago Montiero started strong for race 2, quickly overtaking Norbert Michelisz for the lead. Like in the first race, Sebastian Loeb was putting pressure on the race leader. Unfortunately for Loeb, the race was red-flagged due to the fading daylight and poor visibility on the track, denying the Frenchman yet another win. However, a post race inspection revealed that Montiero's Civic was running 60mm lower than the minimum height requirement, giving the win to Loeb. It was another Citroen 1-2-3 with Ma Qing Ha finishing second, ahead of Jose Maria Lopez. Tom Chilton finished fourth, with Tarquini in tow for fifth place. Huff finished sixth while Bennani came home in seventh. D’Aste and Sritrai scored more points in eighth and ninth respectively with Demoustier rounding up the top 10. Michelisz was given a drive through penalty for due to a parc fermé infringement after race one. Non starters for race two included Catsburg, Coronel and Lapierre for failing to repair their cars within the allotted time. Thailand was not kind to Muller, being involved in another accident.

The next and final round of the 2015 WTCC season will be held at Losail International Circuit in Qatar. The WTCC Race of Qatar will be held on November 26 to 27.