Toyota shows us how it wants to rule the world

Not just cars: Toyota wants to be a household name

One wiper to rule them all: How PIAA Silicone Wipers keep your view clear

Here's the MMDA's explanation of the 5-minute illegal parking rule

The 10 movies that every car enthusiast should see

Over the past couple of years, tech companies like Google, Apple, Samsung, Facebook, Uber, and Amazon have taken over headlines. We’ve begun to hear buzzwords like disruptor, unicorn, mobility, and machine learning on a regular basis. If there’s anything the last decade has taught us, it’s that apps are the key, and concrete assets are not necessarily instrumental to global success anymore.

These are lessons traditional corporate giants have had to learn the hard way. Many malls in the US have lost business thanks to Amazon, video rental chains like Blockbuster succumbed under the weight of Netflix, and tech companies like Google and Apple are steadily creeping into every aspect of our lives.

So what’s a traditional asset-based company like Toyota to do in these changing times? Follow their lead and delve into new markets.

During the recent 2019 Tokyo Motor Show, the biggest surprise was the lack of any upcoming car at Toyota’s booth. Instead, the company offered a whole buffet of alternative vehicles as part of its new direction to become a mobility company rather than just an automaker.

We’ve heard a lot of companies use this term before, but few ever mean it the way Toyota does. By mobility, many will presume it means providing solutions in the form of vehicles that can cover various distances. By Toyota’s definition, it means EVERY kind of mobility, from picking up a water bottle from the floor to traveling cross-country.

The biggest clue to this broader ambition was dropped during our visit to one of Toyota’s newest divisions: the Toyota Research Institute – Advanced Division (TRI-AD).

Founded as recently as mid-2018, the headquarters isn’t even finished, with much of the building still under construction. Nonetheless, the floor itself where all the magic happens is nearly complete. TRI-AD’s mission, according to CEO Dr. James Kuffner is two-pronged, “create world-class technology and build the safest car in the world.” It’s quite broad but is intentionally so, allowing the division to explore a wide variety of possibilities for an unknown future.

You may be familiar with one of their earlier projects, the Lexus LS 500h with RADICAL (Robust Autonomous Driving Incorporating Cameras And Learning) tech called the P4. This self-driving car with a bubble roof that houses all the radars and sensors is already being tested on the roads of Japan. Besides a wide array of sensors, it also uses high speed data to access high-definition maps to aid it in navigating around the city, learning as it goes, and getting better at autonomous driving.

Two years ago, we also talked about Toyota's ‘Mobility Teammate Concept’ that uses facial recognition technology and sensors to monitor the state of a driver. It is being developed to determining if a driver is happy, sleepy, mad, distracted, sad, or perhaps even experiencing a stroke or seizure. When mad or sleepy, it can talk to the driver using topics like sports to perk him up or calm him down. In the event of a seizure or heart attack, the system hopes to take over, pull the car over, and call for help.

With Toyota’s recent commitment to be a partner of the Olympics and Paralympics, the division has been busy developing vehicles and robots to assist in the logistics required of such an event. Part of Toyota’s commitment is to inconvenience as few people as possible and reduce its impact on the environment. This is why Toyota developed so many transport options and robot assistants.

The Sora bus may seem like just another Fuel Cell mule, but integrated into it is an autonomous system that scans the road and steers the bus to within millimeters of a bus stop platform. This allows spectators on wheelchairs to easily roll over a small gap and onto the bus itself. 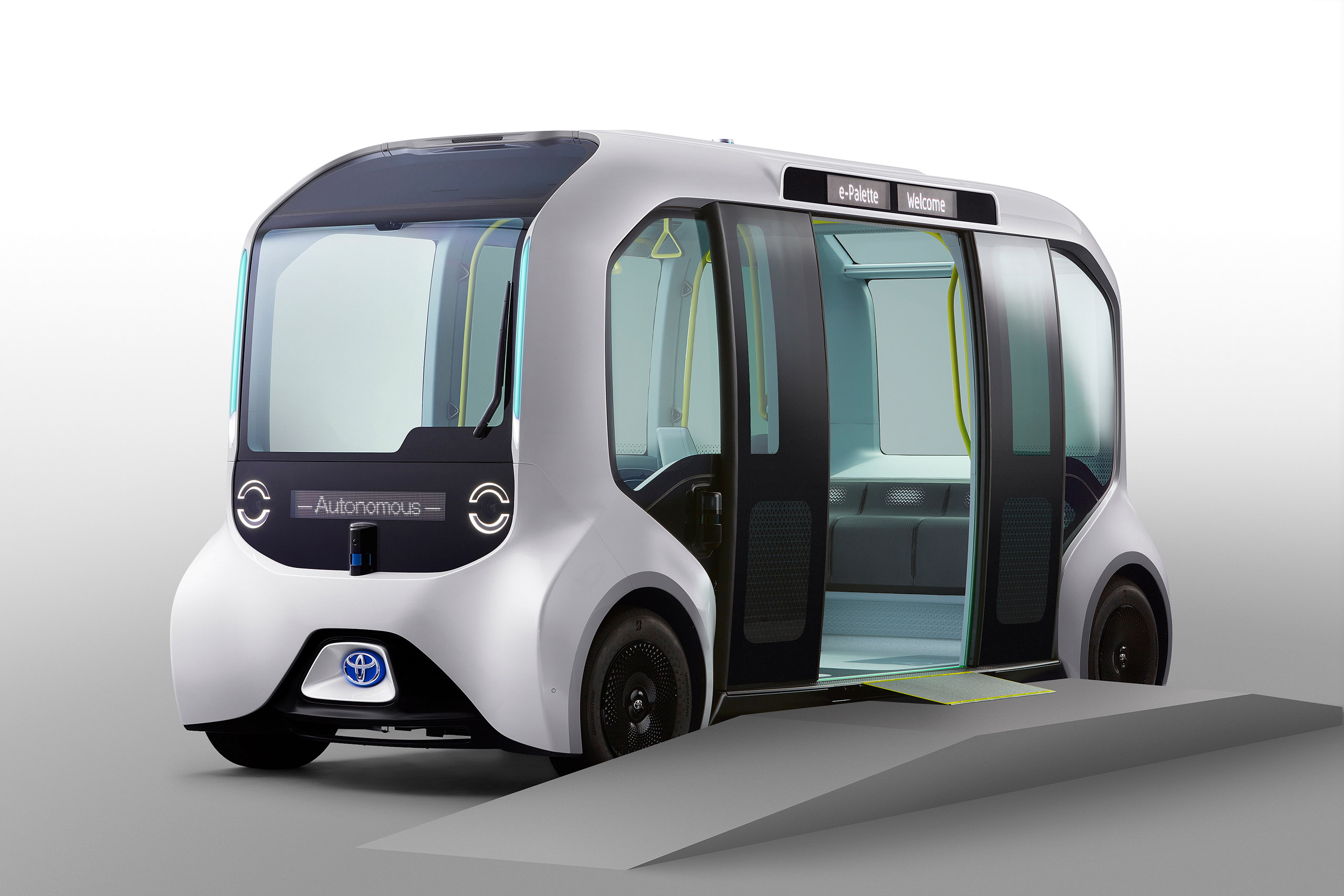 Driving spectators and staff between sport venues will be the e-Palette — a small bus that can seat 20 passengers or four wheelchair-bound passengers. This autonomous vehicle only travels on restricted roads at 19 km/h. And to avoid accidents, LEDs on the front light up in different ways to tell pedestrians when it’s safe or unsafe to cross in front of the vehicle.

For shorter distances, there’s the Accessible People Mover (APM) that can seat six. This flexible vehicle can serve as transport or even emergency vehicle with provisions for a stretcher.

Then, there are the Walking Area BEVs, which are essentially Segways that can be used by visitors, the elderly, or security staff to patrol the Olympic facilities. Those on conventional wheelchairs can even avail of an electric attachment that can tow them around and ease their fatigue or dependence on others.

Finally, at the venues themselves are robots like the Field Support Robot (FSR): an autonomous little car designed to assist marshals at track and field games. The FSR is designed to follow a marshal or referee around, receive objects like a hammer, javelin, or discus and return it to the throwing circle, all while avoiding people and obstacles along the way.

Perhaps one of the main reasons we aren’t inundated with robots right now is their lack of amiable human interaction.

Toyota is working on that right now with prototypes like the Human Support Robot (HSR), designed to assist elderly spectators by picking up objects like dropped water bottles and handing them back, or storing them for later.

Toyota’s Remote Health Check vehicle has a screen which users can interact with, capable of recognizing facial expressions and determining if people or happy, sad or angry, and playing a game if needed and flashing their favorite color to cheer them up.

The Toyota Human Robot 3 (T-HR3) served as a receptionist at the Tokyo Motor Show, responding to its name when called, posing for a photo (with its fingers forming a peace-sign) and even waving back when guests depart.

One of Toyota’s divisions with the biggest potential is easily its UX (User Experience) Division. For now, the division is busy working on the user interface of the upcoming Lexus LF-30 concept car.

To develop this, they’ve designed a development platform called Arene, composed of a sort of operating system, Arene Bench (a desktop computer hooked up to a vehicle’s sensors and ECU), and an Arene UX Motion Simulator rig for testing any changes virtually.

This allows programmers to write software or vehicle functions, test their viability on a virtual platform that simulates the target vehicle, and quickly make changes if necessary.

Those in tune with the tech beat may recognize this as the beginnings of an upcoming vehicle OS and development kit (used by programmers to develop apps and programs). While Toyota did not explicitly say it’s for that purpose, all of the tools to make it so are already there.

Two years ago, with its autonomous driving tech still in development, Toyota said that it will make many of its patents related to this field available for free. It may not have grabbed headlines then, but in light of all the new developments, it’s beginning to look like a bid for world domination.

The reason why personal computers are so ubiquitous now is that Compaq (now owned by HP) dared to build an IBM (now no longer building PCs) Personal Computer clone that could run the same formerly proprietary software on its hardware. All it took was their brazen act for IBM PC compatible clones to proliferate and turn PC's into a household appliance.

By sharing its technology patents, Toyota hopes to do the same and encourage the adoption of its hardware, protocols, and standards over any other competitors. With the Arene development platform, Toyota can easily offer development kits for any budding software company to develop apps for their vehicles. All it takes is for Toyota to start its own vehicle app store to verify, monitor, and distribute third-party apps.

Just like how Google quickly overtook Apple in the smartphone Arena, Toyota hopes to overtake all other tech companies in the mobility arena with its hardware and software.

In a span of 5-10 years, we might see the Toyota logo on everything from our personal robot assistant, the car we take to the office, right up to the receptionist at our place of work. And with the fun and amicable way Toyota is doing it, it’s the kind of world domination we can look forward to.

We go over the pros and cons of commuting on two-wheels.

Nissan let us drive a Skyline that can drive itself

Driving made easy and relaxing with the 2020 Nissan Skyline and ProPilot 2.0

One wiper to rule them all: How PIAA Silicone Wipers keep your view clear

Here's the MMDA's explanation of the 5-minute illegal parking rule

The 10 movies that every car enthusiast should see

Will you choose the 2022 Kia Forte over a Civic or Corolla Altis?

The Kia Forte isn't exactly flying off dealerships, but a new look might change all that

With the northbound Skyway Extension now open, the steel ramp near SLEX-Alabang will be closed to northbound vehicles

Who wouldn't want a subcompact seven-seater with diesel power? That's what the Hyundai Alcazar has to offer