The guttural rasp of exhausts went silent 15 years ago when the last World Rally Championship-style of racing breathed its last in the Philippines.

External factors like the lack of unsurfaced tracks and a dwindling interest in the events were too powerful to overcome. Rallying has always been a major part of Philippine motorsports. Introduced in the early 1960’s, it saw its golden age in the late 70’s into the early 90’s, with several international events held on local gravel roads. 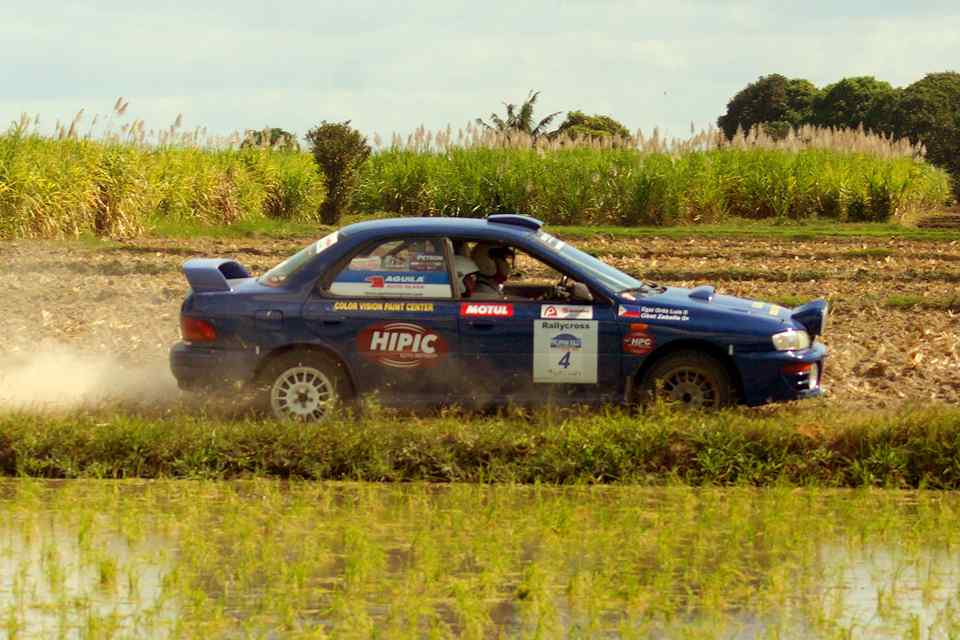 A Special Stage Rally is a compilation of short races where each car, composed of a driver and navigator, compete against the clock. Unlike the now-popular circuit racing, rallies are held on ordinary roads, except for the special stages that usually have unpaved surfaces. These special stages are closed to the public and are often in remote areas. The sum of the special stage times ultimately makes up their score in the form of demerits. The fastest car will have the least negative points and will win the event. Harsh penalties are given to cars that are found speeding in the transit stages that connect to the competitive stages. 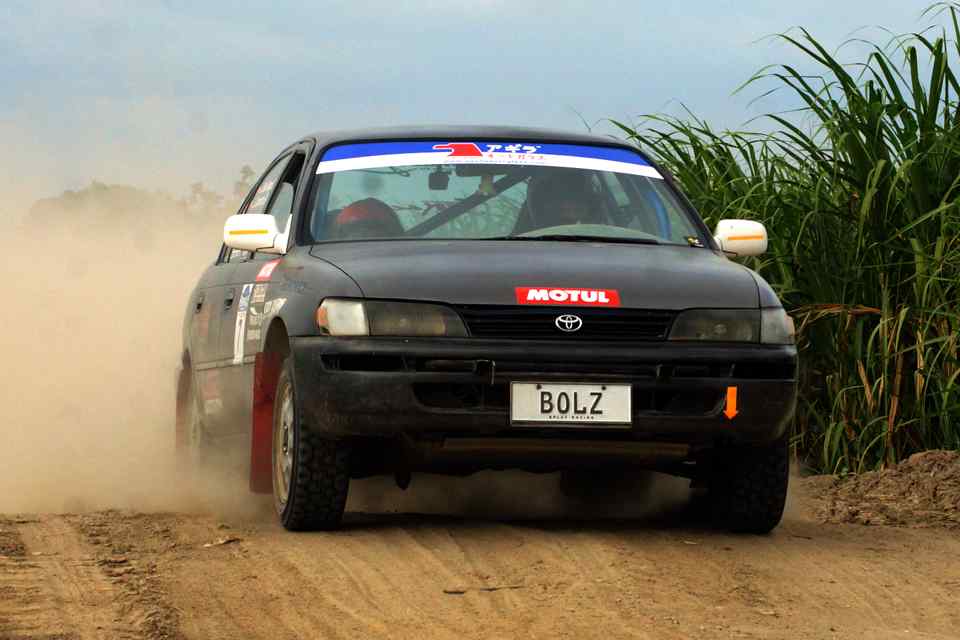 Cheek to jowl can best describe the rally enthusiast. This was what we witnessed and aexperienced last December 8 and 9 at the Philippine Rally 2018. Pradera Verde, the mega resort in Lubao, Pampanga, has been the home of the Philippine Rallycross Series for over a year. Organized by rally enthusiasts who were active before its demise, these scrappy men have been doing a good job in getting veteran racers and attracting a new breed of rally enthusiast to the sport. From an informal get together on a dirt field, to a promise of getting to drive your car sideways once again, this finally evolved into a well-run series, the next step of which was to hold a multi-stage rally. 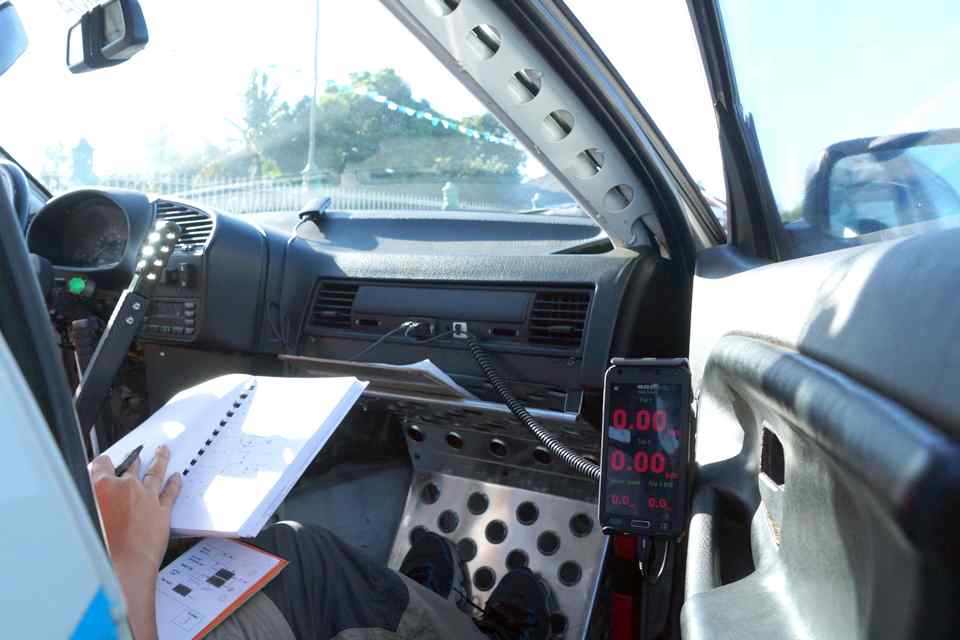 Unlike a rallycross which is a sprint race on a closed dirt or mixed surface circuit where vehicles set-up similarly to rally cars compete, a rally is held on a much larger area with several kilometers between each special stage. Aside from the competing cars, the service crews which support the cars between stages need an area to position themselves. Transporting, communicating, coordinating, housing, feeding your marshals and timers, fueling the lead and sweep cars, to name a few, can be a logistical nightmare. On top of that there has not been a rally of this sort in 15 years, so operations, procedures, and lack of trained officials were part of a reality that everyone needed to contend with. This is where one can witness the closeness of the old Philippine rally community. 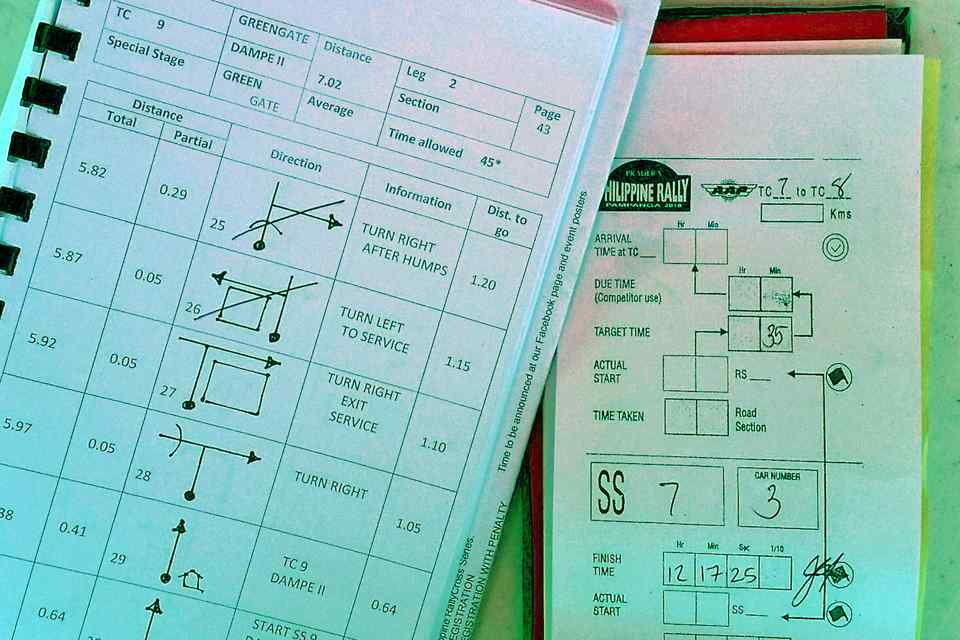 On the first day, familiar faces now sporting more pronounced jowls showed up. Most to officiate and keep things tidy. Veteran drivers took on sometimes the cheeky novice navigators who were enthusiastic but clueless as to what they were getting into. Then there were the pure novice teams, who, having competed in the rallycross series are now crossing over into the world of stage rallying. 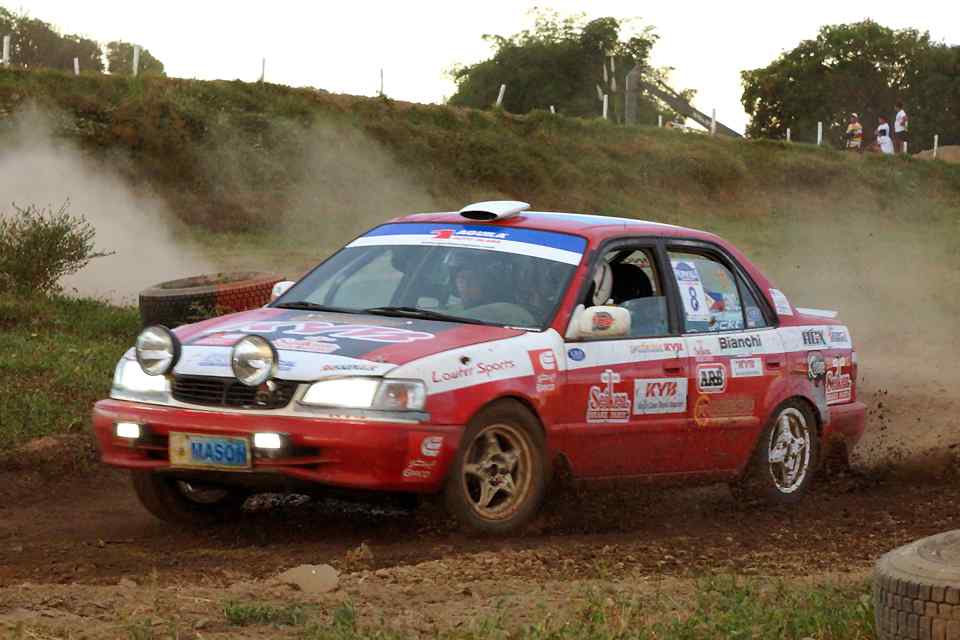 Saturday morning saw the cars arrive for scrutineering. Here the cars’ roadworthiness, safety equipment, and classification, among others, are checked. A competitor’s briefing was held after lunch and at 4 pm a Super Special Stage was held in the rallycross track. One could see the seasoned drivers show off their skills in a muted manner and the young guns eager to establish their mark going all out on the made-for-show special stage. Novice navigators finally had their taste of stage rallying and a few expected hiccups did happen. That evening old hands were eager to offer advice on how to survive the next day.

Early Sunday morning was rally proper. The cars drove off from the Pradera Verde to a typically unregarded barangay basketball covered court in Dampe, Floridablanca. The Rally HQ and service area were quickly set up there. The cars would do their special stage runs and loop back regularly for servicing. Past 9am saw the cars drive in for their first servicing. Veteran drivers got out of their cars. Some calmly, others barking instructions to their crew, knowing exactly what was wrong and what was needed to be done. The novice drivers rolled in and were totally staggered with the new experience. 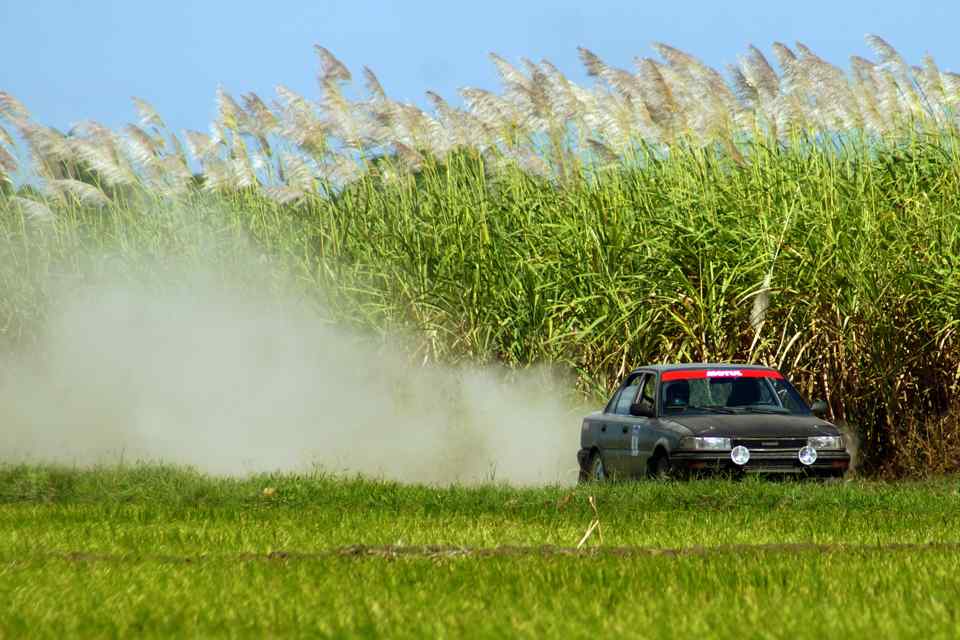 The first 2 stages of the day were a real baptism of fire for all the participants. No car was spared from the air time features of Special Stage 3. A first-time navigator upon getting out of his car, in a fluster said lumilipad kami (Tagalog: we're flying). His veteran driver had nothing but a muted mischievous smile on his face. Another driver described his first-time sensation of having their car hang in the air, in much the same way that bricks don't. From that, some cars drove in with minor work to be done, to one that needed to find the nearest welding machine in town just to get back into the game. 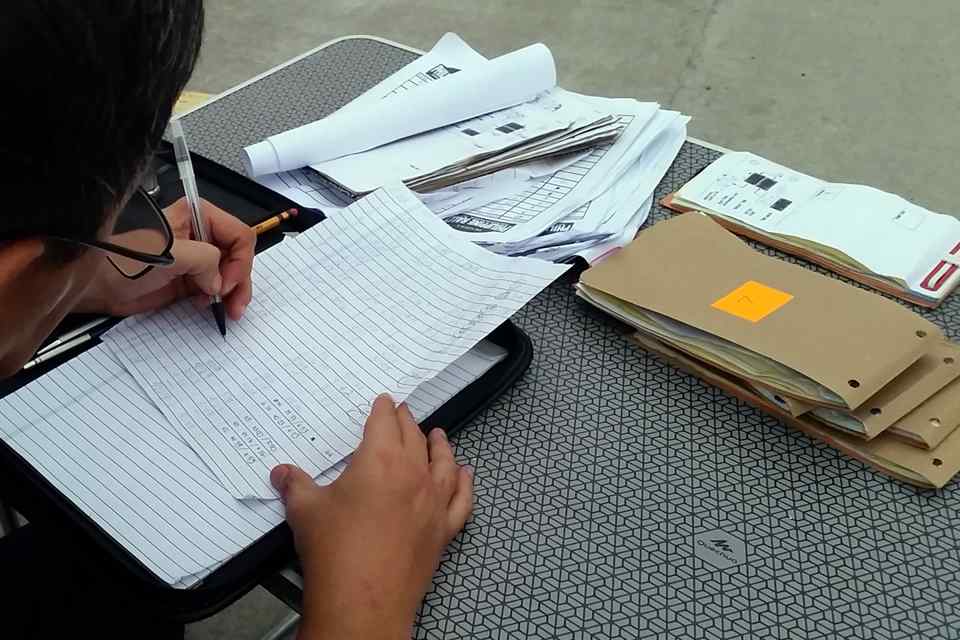 It was good to observe the less experienced were showing a little more confidence from the day before. With an occasional smile or thumbs up, all of them were trying hard to stay focused on their duties. The expected glitches from the newbie marshals and other officials did happen but, as they used to say, the rally must press on regardless. 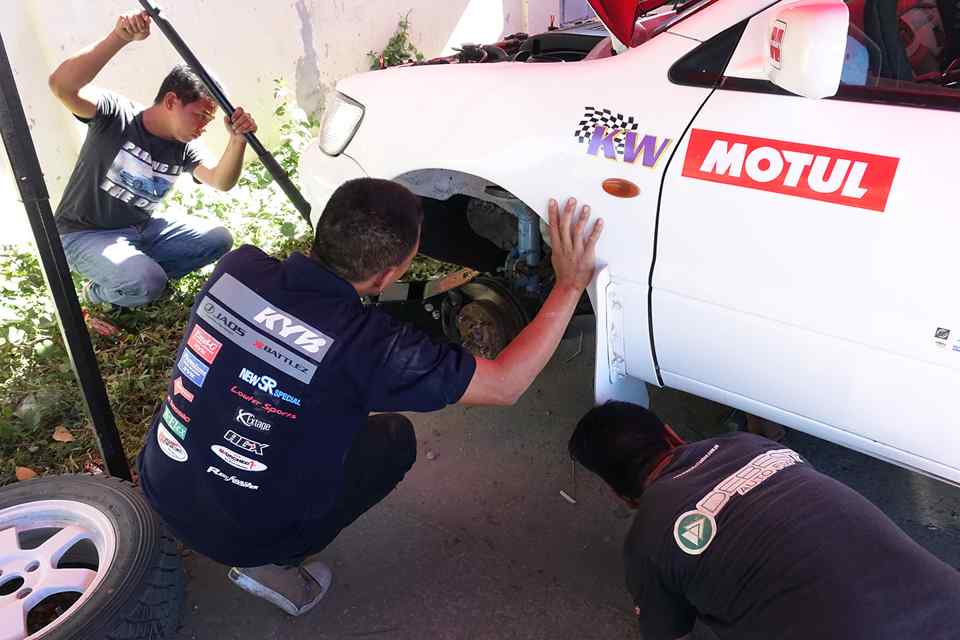 Around halfway through the event, it looked like it would be a rally of attrition. From the original 10 starters, 3 were already time barred from the rally. Those that got their cars running again were permitted to run so that they could put in the seat time for future races, but their times had no bearing on the event. It was good to see the fire burning in the eyes of the competitors as they drove in for their 3rd visit to the service area.

The more experienced teams had water to hydrate and hot meals ready for their crew who by now were feeling the effects of the hot sun and weight of their long-stored helmets brought about by the G forces through the corners. The once-anxious navigators seemed like they were settling down and getting into the flow of things. By now strategies were being planned, like how to maintain the lead, how to grab the lead, and for most just to finish and hopefully get a place on the podium. 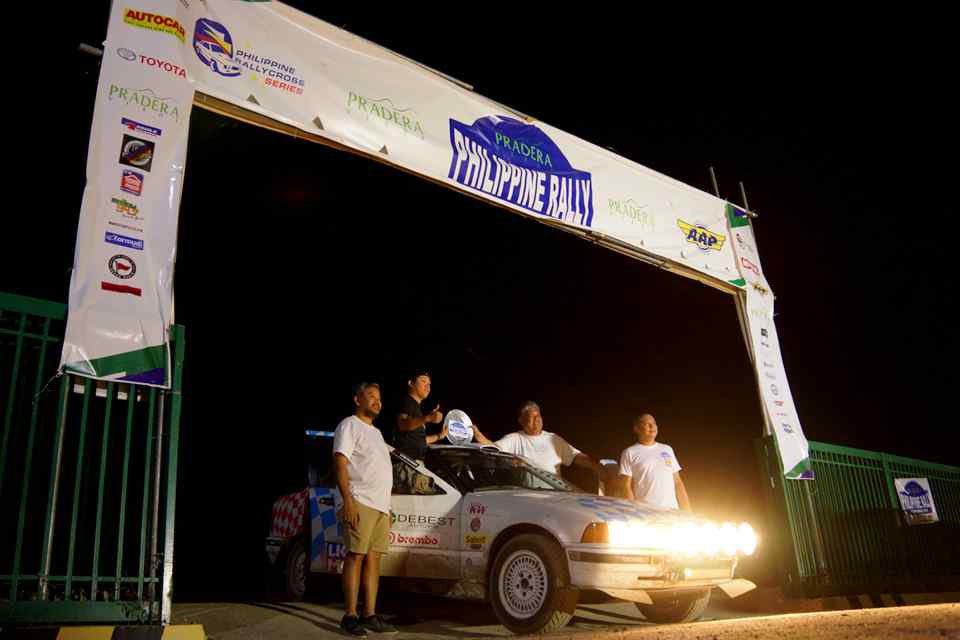 As the rally approached mid afternoon some excellent times were observed coming from the younger drivers. A good sign that they were adapting to the demands of rally racing. The cycle repeated, cars dropping out due to mechanical failure, cars coming in with exhausts cut into two, cam bolts coming loose, electrical problems, the service crews doing herculean work to keep their cars racing on the dirt. Teams were now checking competitor’s times trying to establish their position in the rally. It was a buzz of focused competitive excitement. When asked if his newbie navigator was now a man, a dyed in the wool driver answered: Nag bibinata na! (Slang, roughly: He's reaching adolescence!)

As the fine pyroclastic ash settled, it proved to be a culling. In the end, there were only 5 cars that survived the day. The veteran drivers and a pair of young competitors, all showing true grit and skill. It was a dopamine boost for the old-timers and the birth of a new obsession for the novice participants. As to whether this rally was a Lazarus moment, I cannot really tell. One thing I can say for sure is that everyone who was there that mattered, believed.

From console to race car: How racing games can make you a real-life winner