Action-packed finale sees two back to back winners

The final round of the Vios Cup brings racing back to Subic. Held at the Subic International Airport, the 2.6 kilometer track saw a lot of overtaking and side by side racing. The final round proved vital for many of the contenders with very little points separating them for the title race. 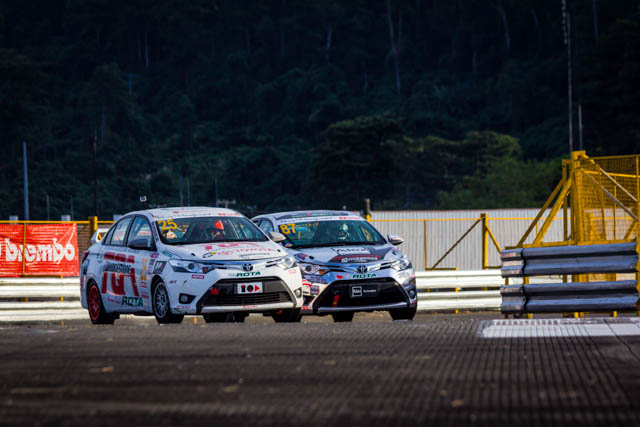 In race 1, fourth place qualifier Raymond Ronquillo had a rocket start, taking the lead from Uy in the first lap. Uy however stayed close to Ronquillo's rear bumper and halfway through the race, Uy was able to overtake Ronquillo in the last turn. The battle between the top two drivers allowed Daniel Miranda to get close to the lead pack. Now in third, Miranda and Ronquillo swapped positions in the latter half of the race. Ronquillo was about to cross the line second until Miranda dove on the inside in the final corner, relegating Ronquillo to third.

The rest of the field ran a quiet race and clean race but it was Basti Escalante who made big during the race. Initially qualifying tenth, Escalante made the most of the first chicane squabble, leaping to fourth by the end of the race. Fellow championship contender Andres Calma finished fifth, a four place jump from where he started. Luis Gono finished sixth while Victor Buensuceso also made big strides in race 1, jumping up six places for seventh. Rounding up the top ten are Ramon Tanjuantco, Tonton Ramos and Jette Calderon.

For race 2, it would be Dominic Ochoa and Raymond Ronquillo  who would be dicing for the lead. Ronquillo led for a brief moment until Ochoa overtook him in the final turn. Ochoa led the race for a few laps until Ronquillo tangled with him, causing Ochoa to spin which led to him veering into the side of Ronquillo. With the top two out of the way, it was race 1 winner Allan Uy who would take the lead and eventually finish the race on the top spot. He was followed by Carlos Loinaz in second place.

The championship race also took a dramatic turn when Daniel Miranda's car retired in the early part of race 2, making it a wide open run for the title.  Calma had to finish sixth or better to take the 2015 crown but was overtaken and finished seventh. 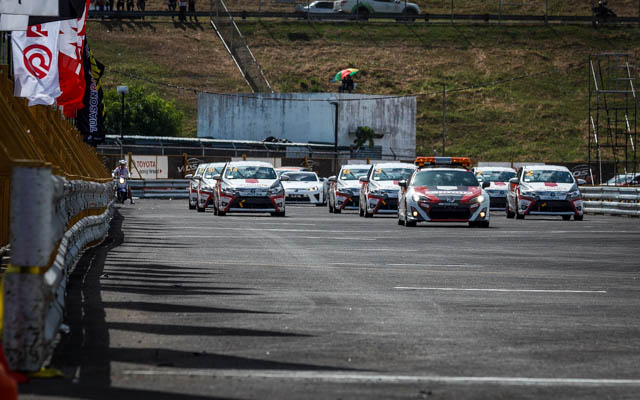 For the final round, the Celebrity Class and Promotional Class were combined in one grid. Sam YG didn't waste time trying to grab the celebrity championship lead from Phoemela Baranda, qualifying on pole with a time of 1:23.037. He was over a second faster the fellow celebrity racer, Phoemela Baranda, who posted a best time of 1:24.119. The front row saw a celebrity racer lockout, making Kiko Dysico the fasted driver in the Promotional Class.

For race 1 of the combined grid, Sam YG bogged down at the start, giving Baranda the lead. Sam YG quickly caught up to Baranda however and was able to overtake her to recapture first. Baranda would not keep second place, slamming into the wall and eventually limping home for fifteenth place. The shuffling of the field after the first lap saw Miko Maristelo as the leading driver for the Promotional Class with Lord Seno in second and Kiko Dysico in third.

A series of penalties would be handed out by the race's end. Sam YG and Baranda would be handed out 15 second penalties for jumping the start. However, Sam YG's lead over the celebrity class was so far ahead, he kept his win in the Celebrity Class. Miko Maristelo would settle for second place for a collision on the track.

Race two almost saw a repeat of race 1 with Sam YG showing dominance over the field. Phoem Baranda tried to recover from her fifteenth place finish in race 1 but Sam YG's pace was unmatched by the entire field.

Miguel Diaz spun out as he tried to enter the chicane and was speared by a speeding Vios. Amazingly, Diaz was able to carry on racing. The rest of the race  carried on without incident with Sam YG winning the second race for the celebrity class and the top driver in the grid. Phoemela Barranda takes second and Jhino Rufino took third in the celebrity class. For the Promotional Class, Lord Seno took the top spot in the podium. Miko Maristela finished second in the class followed by Oscar Suarez in third.

And that wraps up the second season of Vios Cup. All results mentioned are provisional and the 2015 Vios Cup champions will be announced on December 16.

The sizzling cars, trucks, and vans at the 2018 Subic Bay Auto Show