Make no mistake about it: Nissan has been teasing us -tickling, even- with the prospect of an SUV based on the Navara's platform.

The excitement is understandable: we're a market that's extremely receptive to these kinds of SUVs. The Fortuner, Montero Sport, Everest, Trailblazer and mu-X are all volume drivers for their respective companies in the Philippine market. In fact, the sales of the Fortuner was so good in 2017 (in anticipation of the 2018 excise taxes) that it overtook the Vios as the top selling vehicle in the country. 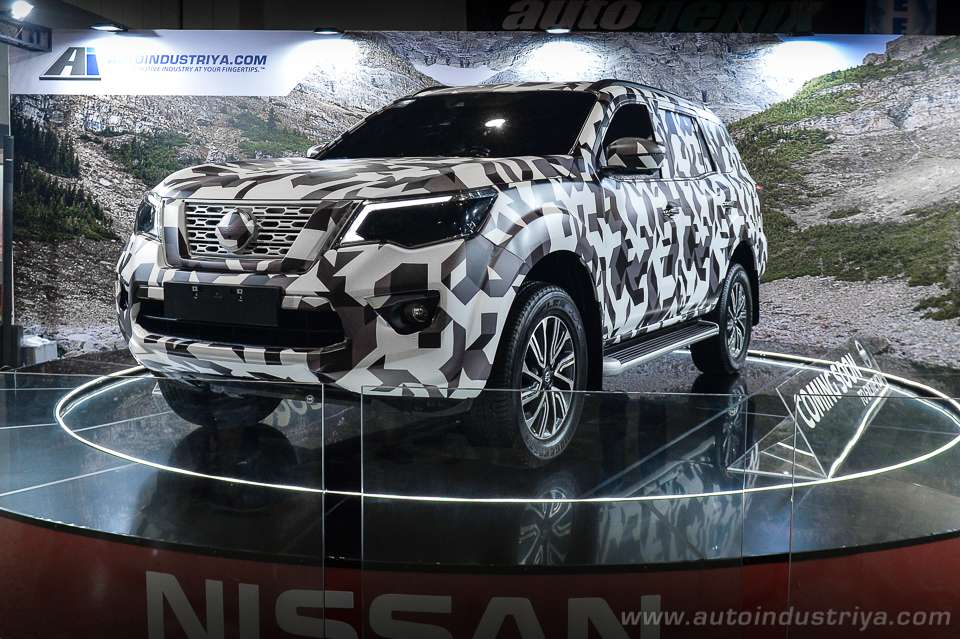 And so, Nissan embarked on a rather clever marketing strategy for the Navara-based SUV. They stoked, enticed, and excited the market, and all without saying what the name actually is. Of course we knew what they were launching, as the Chinese arm of Nissan actually revealed the vehicle online a few months ago.

The teasing is done, and the fanfare of the launch itself is done. Now we're going to drive the Nissan Terra.

Strength in the Name

Earlier today, I finally got a chance to really walk up to and examine the Terra. Sure, we saw it yesterday just as the sun was coming down, but this time I wasn't jockeying for position or bumping into other people just to get a look at one.

The design of the Terra is a different interpretation of the Navara's good looks. Nissan didn't go for fancy details like an unusually busy front, a fancy rear, or some kind of unique method of pressing steel to project strength from the Terra's design. What I really liked was the strength that Nissan presented in such an up front manner.

Sure, there are concessions to modernity like the cameras you can see around the body, the sensors, LED headlamps and the like, but it's still an honest-to-goodness SUV. Everything is about conveying muscle like the proportions, the wheelarches, the best-in-class ground clearance (as the company says), so on and so forth.

What Nissan made is a smaller version of one of their most iconic models: the Patrol. We were actually trying to figure out years ago what Nissan would call this. Some of the ideas that we floated around included Pathfinder and even Terrano; so it's no surprise they decided on Terra, a nameplate of a concept they unveiled at the 2012 Paris Motor Show. I actually wouldn't have been surprised either if Nissan had christened this in the similar fashion as their new partner: Mitsubishi. The smaller Montero or Pajero is called the Montero Sport or Pajero Sport (depending on market). Should Nissan have called this the Patrol Sport?

Regardless of that, Terra is what Nissan will call this, and it does look the part of a rugged vehicle for any kind of terrain, be it pavement, sand, dirt, rocks, or in today's case, lahar.

Our group was scheduled for the second batch of drivers, and just as we were finishing up our mid-morning coffee, the first batch arrived.

The Terras were all dirty, dusty and scuffed up. Some were dinged and scratched. Some had leaves and branches hanging from the undercarriage. In other words, we're taking it to the road less -or never- traveled.

Stepping into the driver's seat (and shaking off as much of the lahar from the carpets as I can) there's a good sense of familiarity. The dashboard, steering wheel, shifter, are all lifted straight from the Navara. Mind you, that's not a bad thing; the Navara's dashboard is still one of my favorites given its straightforward layout, overall look, and ease of cleaning.

Looking around, the first thing you'll notice is that this is no pick-up, what with the wagon body and all. More importantly, this is no 5-seater; it's a three-row seven-seater. We had actually wondered if Nissan would offer a 5-seater version much like the Chinese Terra models, but 7 will be the only one available for our market.

What's unique about the Terra is the folding mechanism for the seats. The third row is the standard 50/50 split that can be folded down if you pull two straps in the back, but the middle 60/40 row can be folded and tumbled by the driver with a pair of switches just aft of the shifter. This means that there's no fumbling necessary for the third row occupants to get in or out (mostly out) of their seats.

The more I looked around the cabin, the more I’m actually impressed. The version we’re driving is the range-topping Terra 4x4 VL, and it comes with everything at its PhP 2,096,000 price tag.

The front seats are power adjustable, as are the mirrors. The key is of the smart transponder variety, meaning you can just keep it in your pocket as you drive. There are three 12 volt ports in front so you can all plug in your charging adaptors; there’s also one behind the third row.

The OE touchscreen infotainment system is from Blaupunkt, and it has Apple Carplay as standard, among other things like Bluetooth, HDMI input, and USB ports.

There’s no sunroof, but that enabled Nissan to put a drop down monitor from the ceiling. The powerful automatic A/C (this is a Nissan, after all) has vents in front, at the back of the center glove box, and even on the ceiling. Wherever you sit, you won’t be left wanting for cool air.

But what sets the Terra apart are the features they market under their Intelligent Mobility banner like Lane Keep Assist. What I really liked was the Intelligent Rear View Mirror; it sounds like some kind of fancy schmancy parlor trick, but it's useful for parking and -as we'll find out later- off-roading.

The only thing I would change is the steering wheel. It's the same as the Navara's, and while it does feel good, on 90 degree or U-turns most drivers typically end up accidentally pressing the horn. I would have preferred the D-cut steering wheel of the X-Trail on this.

What gives the Terra power is a 2.5-liter turbodiesel; yes, the same one as the Navara. But unlike the Navara which has two states of tune at 163 PS and 190 PS, the Terra's engine is just the high-spec 190 PS, 450 Nm version. No, we're not complaining; power and torque is what we want.

Oddly enough, most of the Navara variants come with a 7 speed automatic gearbox. Only one variant comes with a 6-speed manual. And only one comes with a 4x4 drivetrain. Of course on the road, 4x4 doesn't matter much.

On road performance is indeed impressive. Being a more conventional automatic, there's none of that jerkiness you get from more advanced dual clutch gearboxes or the whirring noise of CVTs. The result of the slushbox auto and the 7 speeds is a smooth power delivery and good manners when accelerating. But perhaps the best thing about the Terra is its refinement; the ride from the coil spring rear suspension is very well suited for our roads, and the noise suppression is indeed very good. Yes, we can confidently say that the Terra has one of the best ride qualities -if not the best outright- in its class.

We also got a brief encounter with the lane departure warning feature as part of its Intelligent Mobility suite.

We couldn't do a proper full-to-full tank economy run, but a quick reset and check of the onboard trip computer yielded a rating of 12.7 kilometers to a liter at an average of 80 km/h. The engine's RPM at 100 km/h was 1750, thereabouts. That's just an idea of what the Terra is doing, and only a full test could yield more accurate results.

Once off the expressway (SCTEx, in this case), we made our way towards one of Pampanga's most well known natural wonders for off-roaders: the lahar beds.

Lahar is a very tricky surface to drive on quite simply because it's soft like sand. Step on it and you start to sink just a bit. Drive on it with a heavy 4x4 and you can get trapped very quickly. Thankfully, the Terra has a 4x4 pedigree that stems from Nissan's long experience with such surfaces; there's a good reason why the Patrol is the number one selling vehicle in places like the UAE.

I actually asked Nissan's engineer why they didn't consider putting in a system similar to the Everest where the driver can select a proper mode for the 4x4 system depending on terrain, and it seems I was getting the answer from the Terra: it doesn't need it. On the faster portions of the lahar-laden riverbed that Pinatubo created over two and a half decades ago, 4WD high range is more than sufficient. With some speed, sinking is not a problem, and that's with the standard highway tires that are on those 18-inch wheels underneath. You just have to be careful as you're having fun making a splash; there are big, sharp rocks hiding in the lahar that can play hell with the undercarriage.

When the pace of the convoy slowed down for the tighter and trickier portions, I engaged 4WD low range to give me maximum traction and better torque. Over the now rockier terrain, the Terra moved forward with ease (and a bit more throttle input). The slower speeds and tighter confines meant I was able to put the 360-degree monitor on the rear view mirror to use. It was particularly useful when checking your the distance of front right tire (a major blind spot for off-roaders), enabling the driver to compensate and maneuver safely, sans any damage. Well, at least the major kind.

Stepping out from the driver's seat, I can't help but feel that Nissan has something that will truly impress their customers. The style, the features, the space, the safety equipment, the comfort, and the overall performance are indeed very impressive. And with a price tag that starts at PhP 1,499,000 for the base 4x2 6MT version, all the way up to PhP 2,096,000 for this VL 4x4, it's a certainty that this Terra will help drive Nissan's already superb growth in the Philippines.

Four years ago when I attended the deep dive launch program of the NP300 Navara in Chiang Mai, I had a chance to speak with Chief Engineer Takashi Fukui. He let us in on something way back then: Nissan was already working on the Terra, the very vehicle you see before you, as early as 2014.

Some would say that Nissan took too long developing the Terra quite simply because a lot has happened since that drive. Perceptions and preferences have shifted, technology has moved forward, and a lot of new models already have a head start in entered or re-entering the PPV (pick-up passenger vehicle) or MSUV (midsize sport utility vehicle) class.

But Nissan took their time with the Terra for a reason. I'd say it was about making sure they delivered a truly competitive vehicle for the money, one that would be a market leader and not an also-ran. Though they were also quite fortunate; coming out in 2018 avoids the sticker shock of a price increase before and after the new excise taxes.

Whatever the reason, Nissan has a truly solid product, one that can easily take its proper place as the Junior to the legendary Patrol.

From slalom courses to steep descents, we put Jaguar and Land Rover models through their paces

Does the 2018 Toyota Rush drive better than an Avanza?

Power, economy, and green emissions? It looks like the Peugeot 508 has it all.

Toyota has updated the Wigo once again for 2020, but is this new TRD S worth the extra bucks?

Nissan PH and Urvan owners club team up for frontliners

As COVID-19 lingers in the air, automakers and car clubs keep pouring in support for the nation's doctors, nurses, and medical professionals

Chery expands its dealer network with the all-new Alabang showroom